November is on track to be the second best month in the history of the American Energy Independence Index (AEITR). Through yesterday, the index is up 27% for the month. April’s 39% bounce off the March lows is the biggest, but with the index having doubled in value since then, November is on track to be the biggest points move ever. It’s eclipsed the June high, and has recovered to –12% YTD (the S&P500 is +16% YTD). 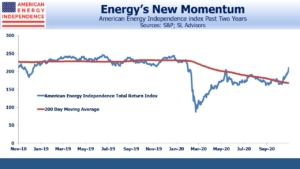 Jim Cramer has even offered some reasons to buy – describing President-elect Joe Biden as “the counterintuitive savior of the oil industry”. He’s echoing a point we’ve made – that Democrat policies favor higher energy prices (see Why Exxon Mobil Investors Might Like Biden). Combined with a more cautious attitude towards growth projects, an era of growing free cash flow is at hand for midstream energy infrastructure – a trend that’s remained in place all year and is returning cash to shareholders (see Pipeline Buybacks Are Coming).

Although energy is enjoying a strong month, fund flows are not yet following which suggests a healthy skepticism remains. Investors in this sector have seen too many false dawns, and remain cautious. Nonetheless, with recently announced buybacks being big enough to counter the typical outflows of the past few months, it won’t take much of a shift by investors to cause net buying.

The vaccine news triggered the rally, but the fundamental outlook had been improving for months before that. Other than Energy Transfer (ET), all paid dividends as expected following 3Q earnings. The components of the AEITR now yield just under 8% on a market-cap weighted basis – almost 4X the S&P500.

The energy sector is the biggest beneficiary of the huge shift under way from technology to value (see The Big Rotation Begins). Since the ratio of the QQQ to the Russell 2000 (IWM) crossed its 200-day moving average on November 9th, when Pfizer’s vaccine news broke, it has moved decisively lower.

The North American pipeline sector has a float-adjusted market cap of around $375BN, less than a fifth of tech giant Apple (AAPL). Exxon Mobil is $175BN. Energy has sunk to below 3% of the S&P500.

The strong performance of technology stocks in recent years means that if just a small percentage of investors switch from tech to energy, it’s likely to move higher given their relative size.

Meanwhile, we can look forward to incoming Climate Change Czar John Kerry overlooking his own outsized carbon footprint while lecturing the rest of us about ours.