To be an investor in the energy sector nowadays requires a view on the politics of climate change. Exxon Mobil’s (XOM) investor day slides go straight there in the Overview, noting the continued demand growth expected of non-OECD countries and its impact on emissions. The debate over global warming can be summed up thus:  OECD countries seek reduced emissions, while developing countries want higher living standards. The world’s energy-related CO2 output will move on the interplay between these conflicting goals. 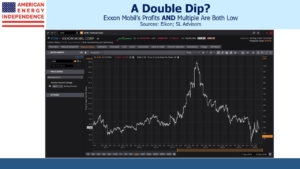 It’s as if the company is warily watching the climate extremists who believe they shouldn’t exist, while investing heavily to meet the demand growth they anticipate. The industry has sharply cut near term growth capex because of Covid. XOM plans a 30% reduction, which they nonetheless described as mostly deferrals, not cancellations. Although they lowered their long term growth capex guidance, they still expect to spend $25-28BN per year (prior guidance was $30-35BN). They see their future in oil and gas. 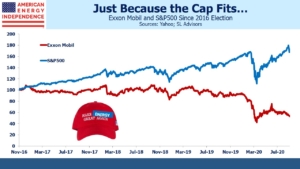 Over the past five years, Cash Flow From Operating Activities (CFO) has averaged $29.6BN. XOM is roughly sinking every dollar they generate back into the ground. They still regard themselves as a growth company.

The presidential election is as vital to energy companies as to any sector. Trump’s 2016 victory was hailed by energy executives, who eagerly anticipated deregulation and pro-fossil fuel policies. The last four years have been a bust, as exuberant spending led to overproduction that Covid brutally exposed.

XOM has lost more than half its value since the 2016 presidential election. The company is expected to post a loss this year – the glut of oil and gas that has long weighed on prices has been exacerbated by the pandemic. But the potential for public policy to shift away from fossil fuels has further depressed its cash flow multiple – typically, multiples peak at market lows because the denominator is very low. But XOM’s price to cash flow multiple is at the low end of the past decade’s range.

The presidential cycle is too short to drive XOM’s capital allocation decisions. Nonetheless, they must contemplate the impact of a Biden victory. Future returns are likely to turn on the interplay between green policies that constrain fossil fuel output and the reduced supply that today’s curtailed spending will cause. Although XOM has trimmed its own long term capex guidance, the only way this level makes sense is if they expect industry-wide reductions to be greater.

Democrat policies that seek to lower fossil fuel consumption tend to focus on curtailing supply – it’s easier to control the few hundred companies involved in oil and gas production than to change the behavior of hundreds of millions of people.

XOM isn’t allocating capital based on the election – but it’s also safe to assume that a Biden victory won’t cause those plans to be altered much either. Since Democrat policies will constrain fossil fuel supply, it’s likely that energy prices will rise. A carbon tax would add further upward pressure. Energy prices are low in America, with plenty of room to rise without causing much outcry.

Higher prices support a green agenda, because they make renewables more competitive. Perversely, this could also usher in a period of improved profitability for the energy sector. XOM’s long term capex plans imply that governments and reduced industry capex will be more successful in constraining supply than demand, leaving higher prices as the main catalyst for changed consumer behavior.

On XOM’s 2Q investor call, SVP Neil Chapman noted that around 70% of its investor base is retail. So it’s not surprising that a quick tour of Seeking Alpha’s website reveals dozens of recent XOM articles targeting the self-directed investor. Many of these offer views on the likelihood of a dividend cut – with its shares yielding over 9%, there are many skeptics. It’s clearly at risk. At just under $15BN, the annual dividend is unlikely to be covered by free cash flow until at least 2023, according to a model from JPMorgan. Like MLPs during the exuberance of the Shale Revolution, XOM is investing in the future and borrowing to pay its dividend.

The most likely way for XOM to sustain its dividend is through higher crude oil prices. Their investors may not appreciate this, but a President Biden could be their path to better returns.