Monday’s dramatic news on Pfizer’s vaccine triggered a sector rotation which could be enduring. A vaccine that’s 90% effective is a far better outcome than most had expected, bringing the prospect of an early end to lockdowns, self-quarantines and the rest of the Victorian-era public health measures we’ve come to accept.

The ratio of the Nasdaq QQQ with the Russell 2000 is followed by many as a reflection of technology versus small cap value. Covid gave a boost to a long-established trend favoring tech stocks in March. The reversal of the past couple of days has caused this ratio to decisively cross its 200 day moving average to the downside. Given the vaccine news, it wouldn’t be surprising for this new trend to continue. 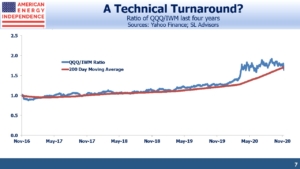 Having lagged value stocks most of the year, energy is leading the way higher. The S&P Energy ETF (XLE) has jumped 16% since Monday morning, helped by a 10% rally in crude oil. The broad-based American Energy Independence Index (AEITR) is up almost 12% since Monday. Pipeline stocks are so undervalued that it doesn’t take much to move them higher. 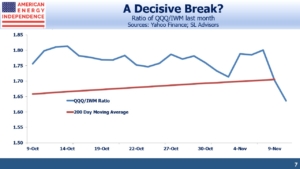 The recently announced buybacks buoyed sentiment, as well as helping neutralize the relentless selling by MLP fund investors (see Pipeline Buybacks Are Coming). Fund outflows have been persistent for most of the year, but the buybacks are big enough to absorb the typical outflows. Western Gas (WES) added to the growing list with a $250MM program yesterday.

Long-suffering energy investors are wondering if the recent move up is the real deal or another head fake. The election is likely to produce the best of both worlds – divided government with an instinctively moderate president (listen to Energy Executives and the Election).

Georgia’s run-off for two senate seats will be heavily financed by both parties – without winning both races, the Democrats will be unable to push the more radically liberal elements of their platform (Green New Deal, fracking ban).

In this political environment, long term capital commitments to new hydrocarbon production or related infrastructure are unappealing (see Why Exxon Mobil Investors Might Like Biden).

The world relies on fossil fuels, and there is little chance of  that changing any time soon. Curtailed investment in new supply should lead to higher prices for oil & gas. Fewer new infrastructure projects will lead to less competition, as well as reduced capital needs.

This will boost the pipeline sector’s free cash flow, which is already set to double this year (see Pipeline Cash Flows Will Still Double This Year). 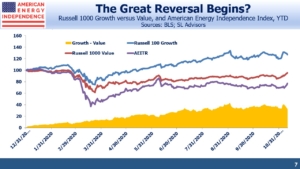 The style rotation has shown up in other areas too. Tech stocks have seemed a one-way bet, so it was no surprise that on Monday, Bloomberg’s US Pure Momentum Portfolio suffered its biggest ever one day drop. It lost over 3.5%, on a day the S&P500 rose 1.2%. MTUM fell another 1% yesterday.

Over two days, Russell Growth has lagged Value by over 8%. As recently as Friday, Growth was 40% ahead of Value for the year.

Pipelines may be the quintessential value play. The components of the AEITR still yield 8.9% on a market cap-weighted basis. 3Q earnings saw dividends paid once again. Energy Transfer (ET) was the only meaningful exception (see Why Energy Transfer Cut Their Distribution).

A recovery in the pipeline sector is long overdue, and given valuations has enormous upside from current levels.