Stephanie Kelton’s The Deficit Myth opens with the startling assertion that the only reason today’s fiat currencies have any value is because citizens need to acquire them to pay taxes. Without that requirement, there would be no need to hold dollars, euros or yen. I first heard this argument from Warren Mosler twenty five years ago when he was a partner in hedge fund Illinois Income Investors in West Palm Beach. I found this view quixotic at the time, although our meeting was too brief to fully refute it. Today Mosler is regarded as the father of Modern Monetary Theory (MMT), seized by progressive Democrats as evidence that the Federal government can pay for everything. 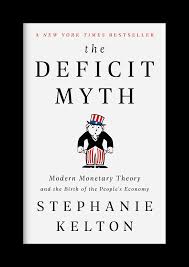 To prove that tax liabilities are necessary to give money value, Kelton recounts a story I heard personally from Mosler in the 1990s. Suppose he assigned household chores to his children with payment promised in business cards. With little of value being offered in exchange for the work, the lawn would remain uncut and the car unwashed. But if Mosler the Dad then imposes a monthly tax of 30 business cards from each offspring, on pain of being grounded, they suddenly have value. The work gets done.

From this follows the logic that the government needs to spend money in order to provide the means with which to pay taxes. The government, as the sole issuer of currency, can pay in regular green dollars, or in yellow interest-bearing dollars (i.e. they can borrow to pay their bills). They can never run out. So they can never go bankrupt. Therefore, deficits don’t matter unless they exhaust the economy’s productive capacity, which is inflationary.

I’m still not convinced taxes are necessary to give a fiat currency value, although behind every such currency lies a government taxing and spending it. For much of human history money has been linked to gold. When the US left the gold standard in 1971, the severing of the link ushered in fiat currencies that derived their value from the issuing country’s policies. But it’s definitely clear that a country can never be forced into bankruptcy in its own fiat currency, as they can always issue an unlimited amount to pay their bills. In this narrow sense, debt doesn’t matter.

So far, this is a non-partisan exercise in economic theory.

Kelton then seizes the access to unlimited credit to gorge on a left wing dream of largesse. Trillions of dollars are breezily allocated to student loan forgiveness, upgrading our infrastructure, fighting climate change and dealing with the pandemic. Because the Federal government can never go bankrupt, deficits don’t matter. The twin looming crises of social security and Medicare don’t matter, because the government will spend whatever it needs to, since its ability to borrow in its own currency is unlimited.

It sounds implausible, but here Kelton misses the opportunity to strengthen her case. Today, America’s fiscal outlook provokes widespread hand wringing and dismay. Retiring baby boomers will command an unsustainably growing chunk of Federal spending. There is nothing remotely optimistic to be said on the topic. Yet long term government bond yields remain defiantly low. The empirical evidence that deficits don’t matter exists in Uncle Sam’s continued ability to fund its needs at rates below inflation. An even more brazen MMT advocate would argue low bond yields are the market’s vindication that deficits don’t matter.

The failure of conventional economic thinking to explain apparently costless fiscal profligacy offers at least an opening for the progressives who have hijacked MMT to drive through. Kelton misses her chance.

The risk is of course inflation. If the government tries to pay for more output than the economy is able to provide, inflation will follow. If Mosler the Dad started adding new chores, he’d have to offer more business cards per hour to motivate his exhausted children. Had his progeny begun saving these cards for the future, the resulting inflation would diminish their value. Kelton does admit to limits on spending, but these are imposed by inflation not deficits. She argues that government spending should rise until it’s inflationary, ensuring maximum utilization of the economy’s potential.

That is in effect current policy, administered by the Federal Reserve’s twin objectives of maximum employment consistent with stable inflation. Kelton would prefer the Federal government was explicitly responsible for the twin mandate rather than the Fed. In doing so they would rely on fiscal, rather than monetary policy.

Since inflation has remained so consistently low that the Fed is trying to overshoot its 2% target, it’s a reasonable argument that pursuing NAIRU (the Non-Accelarating Inflation Rate of Unemployment) through interest rate policy alone is leaving millions of potentially productive people out of the labor force. The Fed can be criticized for over-estimating NAIRU, but there’s no reason to think Congress would do any better. They would inevitably synchronize economic booms even more closely with the election cycle, and there would be no reason to expect anything but a bad outcome. This is why independent central banks are part of every well-run economy.

However, Kelton goes further, advocating government spending until everyone has a job, supported by a Federal jobs program for all. “The federal government announces a wage (and benefit) package for anyone who is looking for work but unable to find suitable employment in the economy.” she writes.

Kelton’s faith that a huge program of useful jobs could be run productively without abuse is naive. Would the government fire lazy workers? Under her approach, “It takes workers as they are, and where they are, and it fits the job to their individual capabilities and the needs of the community.”

It would descend into a jobs program for those unemployable in the private sector. Don’t MMT advocates even believe in workers learning marketable skills?

Many questions are left unanswered. Most obviously, what would the Federal government do when its spending caused inflation? If the ability to issue debt in your own currency is so valuable, why do countries give up sovereignty and join currency unions, such as the euro, or peg their currency to the dollar? What does MMT say about serial defaulters like Argentina? What about Germany’s hyperinflation that preceded the rise of Hitler? And while Kelton argues we should not worry about future entitlement obligations, what would MMT prescribe if those future payments ultimately drive up inflation? She fails to identify a single country that has successfully relied on deficits to maximize economic output.

MMT has become shorthand for unlimited government spending to solve every problem progressives can identify. Stephanie Kelton’s expansive vision of MMT’s possibilities cemented the conviction of many that our economy needs protection from the more liberal elements of Joe Biden’s party. It’s the type of thinking that denied Democrats a stronger electoral showing. Warren Mosler is rich enough to indulge such economic fantasies today, but I doubt 25 years ago he would have favored big government on such a scale.

In Lunch with the FT, journalist Brendan Greeley was disappointingly deferential. There’s little insightful in Kelton’s policy prescriptions. The type of profligate government spending she advocates has invariaby led to ruinous inflation elsewhere. If practised here, progressives would likely blame a Wall Street conspiracy for the economic destruction they had wrought. MMT isn’t a new idea, and isn’t a new source of money for liberals to spend. It should drift from the fringes of policy discussion to complete oblivion.

By clicking the OK button below, you will be connected to a website maintained by a third party.  We are providing a link to the third party’s website solely as a convenience to you, because we believe that website may provide useful content. We do not control the content on the third-party website; we do not guarantee any claims made on it; nor do we endorse the website, its sponsor, or any of the content, policies, activities, products or services offered on the website or by any advertiser on the site. We disclaim any responsibility for the website’s performance or interaction with your computer, its security and privacy policies and practices, and any consequences that may result from visiting it. The link is not intended to create an offer to sell, recommend, or a solicitation of an offer to buy or hold, any securities.

By clicking the OK button below, you will be connected to a website maintained by a third party.  We are providing a link to the third party’s website solely as a convenience to you, because we believe that website may provide useful content. We do not control the content on the third-party website; we do not guarantee any claims made on it; nor do we endorse the website, its sponsor, or any of the content, policies, activities, products or services offered on the website or by any advertiser on the site. We disclaim any responsibility for the website’s performance or interaction with your computer, its security and privacy policies and practices, and any consequences that may result from visiting it. The link is not intended to create an offer to sell, recommend, or a solicitation of an offer to buy or hold, any securities.