Writers care what their audience thinks, and we monitor pageviews and comments to learn what resonates. For pipeline investors, a few months into the year it was looking like the mother of all bear markets. The sector had been persistently lagging the S&P500 since peaking in 2014, and pre-Covid the fundamentals were improving strongly. Fortunately, the recovery since then has repaired much of the damage to portfolio values, if not the emotional scars from extreme volatility. The American Energy Independence Index is –13% for the year, compared with –51% at the end of 1Q.

In reviewing the year’s most popular blogs, they can be divided into (a) commentary on the energy market, and (b) politics, especially around climate change. Part one of this two-part, year-end review will focus on the market blogs.

Most of all, investors want to understand why stocks are moving as they are. Pipeline stocks bottomed in March, and crude oil in April when it briefly traded at negative prices. Can An ETF Go Negative? looked at the United States Oil Fund, LP (USO), an ETF that provides exposure to crude oil. It’s a result of our Balkanized regulatory structure which separates stocks from futures. That the SEC and CFTC persist as separate entities is because their overseers are separate Senate Committees (Banking and Agriculture, respectively). Merging them would eliminate campaign contributions to one Senate committee’s members, a battle successive Administrations have avoided.

Different oversight means different rules, so firms tend to offer either stocks or futures, but not both. Buying crude oil futures would be a more efficient way for oil bulls to express a view but preferring to keep assets at one firm they buy USO instead. USO then buys oil futures, increasing the friction for the ultimate investor.

A regular theme is the diminishing importance of the MLP structure. The shrinking pool of MLP buyers, caused by serial distribution cuts, has reduced MLPs to only a third of North America’s midstream energy infrastructure sector (see The Disappearing MLP Buyer). It’s also created problem for MLP-dedicated funds, which are becoming increasingly concentrated in the few remaining names (see Today’s Pipelines Leave MLPs Behind and Are You In The Wrong MLP Fund?). 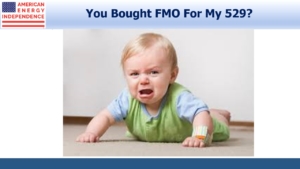 MLP closed end funds offer a target-rich environment for criticism (see MLP Closed End Funds – Masters Of Value Destruction). As Warren Buffett said, if you’re not going to kick a man when he’s down, when are you going to? They are a dumb idea, and if they didn’t already exist no responsible fund manager would fill the void. Most recently, the Fiduciary/Claymore Energy Infrastructure Fund (sporting the delightfully inappropriate FMO ticker — Fear of Missing Out) announced an “income tax accrual adjustment” following “a further review and change in understanding” of the tax rules under which they operate. Markets and the tax code are too much for this hapless fund, -86% YTD.

In a year of superlatives, pipelines have surprised by maintaining strong growth in Free Cash Flow (FCF) despite the pandemic. During the collapse in transportation demand that culminated with April’s briefly negative crude prices, any FCF growth appeared implausible. Nonetheless, even by May the outlook was improving (see Pipeline Cash Flows Will Still Double This Year), and one of our most read pieces was from two days before the low (see The Upside Case For Pipelines). We were bullish then, but as regular readers know we usually are, so won’t claim any credit for foresight.

The outlook remains very positive, with FCF expected to increase by a further 50% next year supported by lower spending on new projects. Incoming President Biden is likely to be an impediment to growth capex, a welcome development.