The contrast between the pricing of debt and equity issued by pipeline companies is probably the topic that most engages clients in our discussions. In a recent piece on the equity risk premium (see Stocks Are Still A Better Bet Than Bonds) we used the example of Enterprise Products Partners (EPD). Because EPD’s common units yield 3X its long term debt, an investor with the flexibility to move from one asset class to another could achieve a bond-like return by investing a small portion of her capital in the equity.

In short, it seems implausible for the market to be so enthusiastic about a company’s long term debt while at the same time pricing its equity as if prospects are dire. Nonetheless, this fairly describes the current state of the public markets for midstream energy infrastructure securities.

Bond yields are low everywhere, partly the result of inflexible investment mandates by a significant portion of the global investor base. We have touched on this issue before (see Blinded By The Bonds and Real Returns On Bonds Are Gone). The persistence of negative real yields on sovereign debt, and indeed negative nominal yields, such as German ten year government bonds at -0.50%, can hardly reflect a widespread fear of deflation. Fiscal discipline is no contest for fighting the pandemic, and the Federal Reserve has even modified its inflation targeting to allow an overshoot of 2%. The only logical conclusion is that a great many institutional investors own bonds not because they want to – but because they have to.

This situation has been years in the making. Rates fell to previously inconceivable levels during the 2009 financial crisis, and have remained there ever since.

The comparison of Energy Transfer (ET) debt and equity over the past eighteen months offers a striking example of investors’ divergent views. 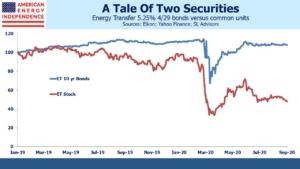 ET issued new ten year bonds in early January 2019, with a yield of 5.25%. The chart above shows the path followed by this debt and ET’s common units from that issue date. The two securities tracked one another for a few months before the bonds began to modestly outperform.

During the pandemic, debt and equity both fell sharply. The bonds fell less, reflecting their senior position in the capital structure. But the most striking feature of the chart is that the bonds have almost completely recovered and trade well above par, while the equity remains 50% lower than January 2019.

ET has a poor reputation for corporate governance, something we have noted (see Will Energy Transfer Act with Integrity?). Kelcy Warren’s bare-knuckle approach to business has made many enemies. But the company didn’t suddenly adopt its culture.

Legal challenges with the Dakota Access Pipeline (DAPL) are a potential headwind, but DAPL is around 3.5% of ET’s EBITDA so even a complete shutdown shouldn’t seriously impact the company (see Pipeline Opponents Help Free Cash Flow).

If the company’s prospects are as poor as implied by the weakness in its equity price, its debt has no business trading with a 4% yield. Conversely, if its balance sheet is as solid as this yield implies, the equity is mispriced. 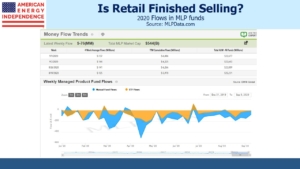 Just as bond investors seem to buy yield-less government bonds without regard to value, equity investors in this sector seem to sell with equal disregard for the outlook. MLP funds have labored under outflows virtually all year. In conversations with investors, the biggest source of frustration is that prices don’t reflect fundamentals, and are often under pressure. The consequent fund outflows are, for now, drawing more selling. Nobody worries about pipeline stocks being overpriced (a preposterous notion). They do ask when the stocks will go up.

The answer is, when the current cohort of frustrated sellers is done. It could be any day.