Bill Gates, in an interview two years ago, asked how Tokyo would cope with a typhoon if it was fully powered by renewable energy. Compensating for the loss of solar and wind for two to three days would require enormous battery back-up that would sit mostly idle, other than once every few years. He noted the economics would be unworkable.

Texas is a leader in wind energy. It’s tempting to blame the recent blackouts prompted by exceptionally cold weather on the intermittency of wind power. A photo of a helicopter de-icing windmill blades  became an iconic reminder of the opportunistic nature of renewables. Widely circulated on social media, it turned out to be from Sweden several years ago. 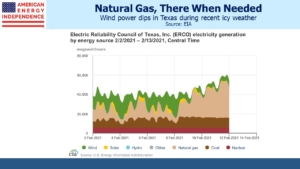 Texas uniquely has its own power grid, overseen by the Electric Reliability Council Of Texas (ERCOT). Power suppliers compete to provide electricity to the network, and while free markets have much in their favor, reliable power in that market is clearly under-valued. Wholesale electricity prices reached $9,000 per MWh, the limit set by ERCOT. Average U.S. residential prices are 13 cents per KWh, equal to $130 per MWh. Some Texan households will be getting a shockingly high utility bill. 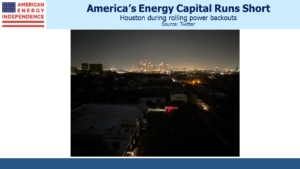 The energy sector responded by continuing its strong rally. The American Energy Independence Index, which consists of North America’s biggest pipeline companies, is up 15% YTD, 10% ahead of the S&P500. This could simply be a response to rising oil and gas prices, but it may also reflect a growing awareness that the world will need all sources of energy for the foreseeable future. Solar and wind are prone to go offline during extreme weather events. California’s drive to expunge everything but solar and wind led to rolling blackouts last year during a heatwave (see California Dreamin’ of Reliable Power). Renewables are developing an unfortunate reputation for being there until demand surges, when they’re most needed. Providing back-up adds significant expense.

It’s too early to judge the public response to this failure. Texans are still trying to stay warm. But a cooling dose of realism poured on the single-minded focus on renewables is long overdue.

U.S. foreign policy is now configured to take account of our climate goals, which is a positive development. However, the charge of hypocrisy is easily leveled against both people and countries trying to persuade others to change their ways.

For example, the U.S. plans to halt funding for overseas fossil fuel projects, so as to highlight China’s continued bankrolling of coal projects among poorer countries. China is doing more to warm the planet than any other country – they burn half the world’s coal and are promoting its use among others. With poorer countries less able to cope with rising sea levels, we’re in the odd position of promoting behavior that we find more in their interests than they do. And while reduced coal use is a good objective, the U.S. is forecast to increase its coal consumption this year and next (see Emissions To Rise Under Democrats).

Past years switching from coal to natural gas are being reversed, because natural gas isn’t as cheap as it used to be. Democrat policies are designed to increase energy prices, with sometimes unintended consequences. American leadership would mean phasing out our own use of coal.

Moreover, Joe Biden’s emissary to convince the developing world to use less coal is John Kerry, whose lifetime of private jet travel must make his personal carbon footprint the envy of those he would persuade.  Climate change is a serious issue but is not yet receiving a coherent policy response.