This is an assertion made by economist Roger Bootle. Two decades ago he argued the opposite, in The Death of Inflation: Surviving and Thriving in the Zero Era. But now the founder of Capital Economics regards, “the environmental emphasis and in particular the drive towards net-zero” as the single biggest factor pushing inflation higher.

The Administration’s ready embrace of deficit spending to finance a laundry list of progressive Democrat priorities is one source of inflation. Negotiations with Congressional Republicans over an infrastructure plan appear to be stalling, which will result in another enormous round of spending approved by reconciliation so as to avoid a Senate filibuster.

Stephanie Kelton gave us the fiscal policy blueprint in The Deficit Myth (see our review here). Because the government can’t default in its own currency, any amount of spending is good until it’s inflationary. The corollary is that spending to fix everything is inadequate until it’s inflationary. This includes financing the energy transition. Democrats have embraced her ethos with enthusiasm.

In a narrow sense, inflation can be defined as price increases in excess of the utility provided. When workers received a 5% pay increase with no change in output per worker (i.e. Improved productivity), that became the 1970s definition of inflation in Britain’s union-ravaged economy. It seems straightforward when applied to labor, but prices of all kinds of goods and services rise without causing an inflationary spiral. College tuition and healthcare defy gravity, but in the past year commodity inflation has become widespread too.

Copper is an example. Goldman Sachs estimates that an electric vehicle requires five times as much copper wiring as an internal combustion engine, and a 3-megawatt wind turbine (enough to power around 800 homes) uses up to 4.7 tonnes of the metal. Electrification of everything is central to the energy transition, which has pushed copper prices to the highest in a decade. Oddly, this isn’t yet stimulating increased investment in new production, which on current trends will drop by half over the next five years.

For different reasons, crude oil prices are rising – here, the rebound from Covid is colliding with reticence among the large publicly owned energy companies to invest in new production. Because the average oil well’s output falls at 3-5% per annum through decreasing pressure, that much new output is needed annually just to maintain supply. Exxon Mobil, Chevron and Royal Dutch Shell are all likely to spend less than previously planned, which is improving market fundamentals for those unburdened with climate extremists as owners, such as OPEC and Russia (see Profiting From The Efforts Of Climate Extremists).

Although the media breathlessly forecasts imminent peak oil, demand continues to grow. The world is likely to return to its pre-Covid 100 million barrels per day level by year’s end.

The increases in copper and oil are both inflationary, even though they’re the result of opposing energy transition effects.

Inflation is rising and concern is widespread. The Fed is enabler-in-chief. They’re actively seeking higher inflation while brushing away any evidence it’s rising. Commodities are tight because of logistical issues that will be resolved; energy is volatile and should be ignored; housing inflation is measured by the quixotic approach of surveying homeowners on what they could rent their house for – a truly dumb construct unmoored from reality (see The Fed’s Narrowing Definition Of Inflation). Only an economist could love it.

Criticism is growing, including from former Federal governors. Kevin Warsh warned about The Fed’s Risky Fill-the-Punch-Bowl Strategy. Warsh notes that the Fed has bought 56% of the government debt issued since the pandemic began. They don’t even need Stephanie Kelton on the FOMC — her philosophy is already mainstream. Warsh says the Fed, “… should stop buying mortgage securities immediately. Soon after, it should slow its purchases of Treasury debt. It should not tolerate Fed-financed fiscal expansion.”

Bill Dudley, NY Fed president 2009-18, says, The Fed Is Risking a Full-Blown Recession in a recent Op-Ed. He argues that the Fed’s three criteria for raising short term rates (employment has reached its maximum sustainable level, inflation has reached 2%, and inflation is expected to remain above 2% for some time) mean they’ll be late. Dudley bluntly warned markets have underpriced the likely path of short term rates, a stinging rebuke from a former FOMC member. 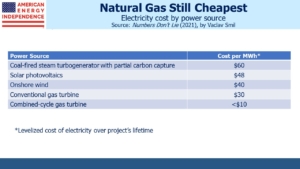 The energy transition will increase prices. Where renewables are a bigger source of electricity, it’s either more expensive (Germany), prone to weather-induced disruption (Texas) or both (California). It shouldn’t need pointing out, but if renewables were cheaper than gas and coal they’d be ubiquitous and China wouldn’t be building new coal plants equal to current U.S. coal-burning capacity. Vaclav Smil, prolific author of many thoughtful books on energy and related topics, estimates that a new combined cycle gas turbine will still be 75% cheaper over its life than solar or wind (see the chapter Why Gas Turbines Are The Best Choice in his new book Numbers Don’t Lie).

Blackrock’s Larry Fink said, “If our solution is entirely just to get a green world, we’re going to have much higher inflation, because we do not have the technology to do all this, yet.” He continued, “That’s going to be a big policy issue going forward too: Are we going to be willing to accept more inflation if inflation is to accelerate our green footprint?”

The energy transition is likely to be inflationary because energy will cost more. To some degree this might be a price worth paying for sensible climate risk management, although climate extremists are purists with no regard for cost-benefit analysis. Smil’s figures suggest a full-blown rush to zero emissions might cause prices to quadruple or more. Since energy prices affect everything, the consequences will be broadly felt.

Because the Fed is monetizing a good portion of the debt used to finance government spending, this has the potential to magnify the inflationary impact of higher prices.

It’s no surprise that inflation is the topic most often raised in discussions with investors. Midstream energy infrastructure offers a potential source of protection.