Last week’s news from Pfizer triggered some big sector moves, as investors sold technology stocks in favor of value like energy and financials (see The Big Rotation Begins). Pfizer CEO Albert Bourla didn’t overstate the case when he said, “It is a great day for humanity when you realize your vaccine has 90% effectiveness. That’s overwhelming,” 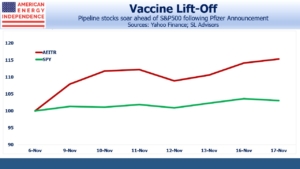 Moderna followed up with their own vaccine announcement this week, topping Pfizer with 94.5% efficacy. Even though this news was telegraphed by Anthony Fauci days earlier, the switch into value stocks has continued. 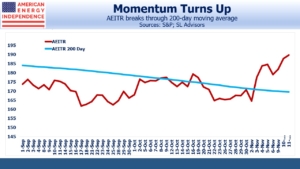 On the day of Pfizer’s announcement, the American Energy Independence Index (AEITR) solidly crossed its 200–day moving average. It has continued to move sharply higher since then, outpacing the S&P500 by 10%. The prospect of a return to normalcy within six months or so has lifted sectors that Covid has hurt, such as energy.

Yesterday showed the energy demand for pipeline stocks, as the sector opened down on the day but traded up from then on, increasing its recent outperformance against the S&P500.

For the past six months, investors have wrestled with the conundrum of the Covid pandemic and rising equity markets. During the spring, the news seemed so relentlessly bad that holding a constructive view on stocks seemed insensitive (see The Stock Market’s Heartless Optimism).

Superlatives were inadequate for the many record statistics that described the global economy shuddering to a sudden halt. Economic distress shows up quickly in the employment statistics. The April non-farm payroll report recorded a stunning loss of 20 million jobs – almost 1 in 7 U.S. workers lost their jobs in one month. Even in the face of this disaster, the S&P500 was up 12% by the end of the month.

Although the Federal government’s stimulus is widely credited with arresting the economy’s sharp decline, most people assume that personal income has similarly collapsed along with employment. This is not the case.

The chart below shows the personal income “bridge” from September 2019 to September 2020. Disposable Personal Income – that is, including the effects of any government transfer payments such as unemployment insurance, is $1TN higher than a year ago. $800BN of that is due to direct payments by the Federal government. But even Wages and Salaries are $56BN higher over this period. 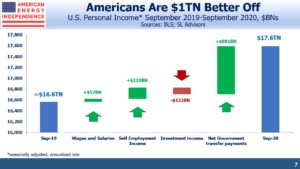 Meanwhile, the economy has lost ten million jobs. In 2019 we averaged monthly gains of 178K None of us have ever witnessed a period like this, with employment and personal income heading in sharply different directions. 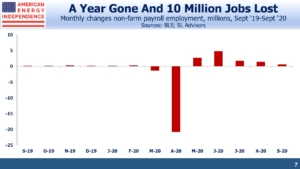 It’s surprised economists for most of the year. The failure of Congress to pass an additional stimulus plan has created fears of more widespread hardship. But the vaccine news from Pfizer and Moderna will likely temper the more extreme stimulus proposals.