On Tuesday morning, Enbridge (ENB) and Spectra (SE) revealed how they’d spent the Labor Day weekend by announcing their merger. After the highly contentious and ultimately unconsummated Energy Transfer/Williams soap opera, it was a welcome surprise to see two large energy companies join their businesses agreeably, without rancor.

Although the financial media excitedly covered the union, investors in the Master Limited Partnerships (MLPs) controlled by ENB and SE might well have wondered what’s in it for them. In another demonstration that the General Partner (GP) is where the action is, their long list of affiliated MLPs enjoyed only muted revaluation at best. The combined ENB/SE will control (among others) Spectra Energy Partners (SEP), Enbridge Energy Partners (EEP) and Midcoast Energy Partners (MEP). Yet since control of the MLP lies with the GP rather than the Limited Partners (LPs), there was no need to acquire the MLPs.

Not only did SEP investors not see a bump in their stock price, but SEP’s price fell as the market reflected its greater use as a source of funding for the $26BN combined capex program scheduled 2017-19. One of the MLPs, EEP, has a cap on its Incentive Distribution Rights (IDRs, the fees paid to the GP) of only half the limit set for SEP. This makes it potentially attractive for EEP to be rolled up into SEP where the more generous SEP IDR structure would apply to its cashflows. GPs always have options.

Suppose two big hedge fund managers merged. To avoid any confusion we’ll use fictitious names of two already successful firms, Masters of the Universe (“Masters”) and Kings of the Cosmos (“Kings”). The owners of Masters and Kings would rightly celebrate, since they anticipate many operating efficiencies as well as synergies by working more closely together. Clients of the hedge funds run by Masters and Kings would gamely cheer the union as well, reasoning that a good financial event for the stewards of their capital surely couldn’t actually be bad for the clients, even if no objective evidence supports such warm feelings. Principals from Masters and Kings would reach out to significant clients and explain their new growth strategy as “win-win”, “good for all concerned” and “driven by partnership philosophy.”  In fact, a good rule as an investor is to recognize that when a money manager refers to his clients as “partners” (think hedge funds and private equity) the fees look less partner-like and more wealth-transfer-like.

Masters and Kings will use their now larger aggregate Assets under Management (AUM) to grow their investment strategies to the limits of their capacity and beyond. They’ll rely on the Large Size = Highly Successful = Defensible Decision thought process of new investors and their consultants. The original clients’ misplaced earlier happiness is rewarded with lower returns.

It’s not a perfect analogy. MLP investors are generally treated far better by MLP GPs than are hedge fund and private equity clients. And hedge fund managers rarely merge, although size and performance reliably follow opposite paths.  But the ENB/SE merger is about synergies, faster cashflow growth and stability from diversification. The affiliated MLPs’ main purpose in life is to provide cheap capital to support the GP’s growth plans. A skillful GP generates MLP returns just sufficiently attractive to keep investors returning, but anything in excess is wasteful. When an MLP yield falls from, say, 7% to 5%, the corresponding strong price performance cheers its investors. However, to the GP the resulting low yield on its MLP creates an imperative to cash in by issuing equity cheaply to fund more growth. A GP who allows the yield on his MLP to fall too far is missing an opportunity to issue equity. Investment bankers rarely fail to point this out.

We like the ENB/SE merger, but that’s because we’re invested in ENB and SE rather than any of the affiliated MLPs. We also note that Williams Companies (WMB) continued the rally that followed its escape from the altar with Energy Transfer. The 11.4X Price/Distributable Cash Flow multiple of WMB looks attractive relative to SE’s 25.3X, more so following ENB’s willingness to merge at that valuation.

We are invested in ENB, SE and WMB 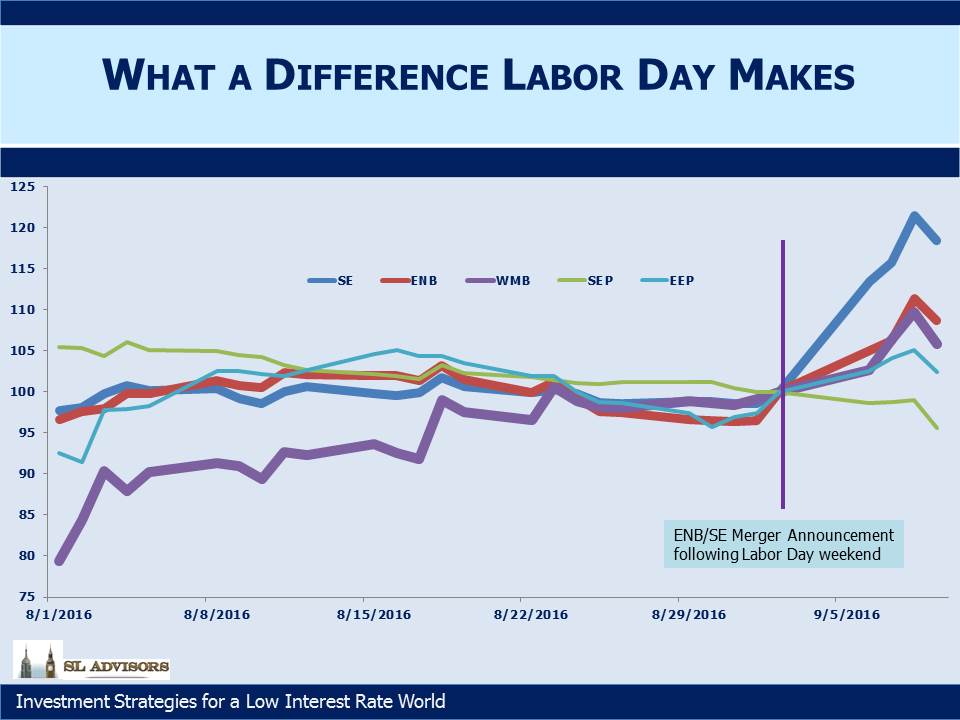 MLPs and Crude Oil, the Improbable Dance Partners Growing Without Paying For It
Scroll to top