Relative valuations are provoking comparisons with past episodes that ended poorly, such as the late 1990s tech bubble. Tesla (TSLA) has risen 75% since announcing its 5:1 split on August 11th. Apple (AAPL), and their 4:1 split caused Exxon Mobil (XOM) to be dumped out for the Dow (see The Dow’s Odd Construction). 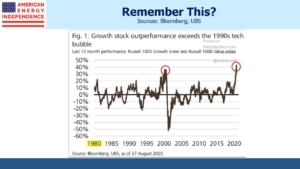 There are plenty of articles comparing growth with value. For an energy flavor, consider the comparison with pipeline company Enterprise Products Partners (EPD). As recently as early last year, like AAPL, it traded at under 10X cash flow. Their paths soon diverged, and this year’s Covid-inspired tech rally has led us to the surreal moment at which EPD would need to increase in price by 4.5X, or AAPL drop by 78%, in order for their cash flow multiples to be synchronized once again. AAPL’s net income over the past five years has varied between $46BN and $59BN, with $56BN expected this year. A reduced sharecount due to buybacks makes the EPS figures look better but, unsurprisingly with $50BN+ in anual profit, AAPL is no longer a high growth company. 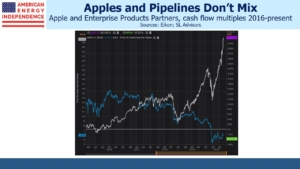 Technology has been hot to be sure, but in spite of what a cursory glance might suggest, the energy sector has not been completely abandoned. Investors who purchased EPD’s 5.1% 2045 maturity bonds issued in February 2014 have been handsomely rewarded – at least by the extremely modest standards which bond buyers have long accepted. At the time, the cash flow yield on EPD’s stock was modestly higher than the bond yield, which probably convinced some that the bonds, with their fixed coupons and no participation in EPD’s future cash flow growth, weren’t cheap enough. 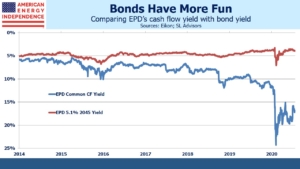 Those original investors have received their 5.1% coupon and enjoyed some modest price appreciation, since their bonds are now priced at around 120. This is in spite of making their purchase less than six months before energy stocks peaked. Since then, the Shale Revolution has been ruthlessly crushed, leaving energy stocks in disorderly retreat and sweeping EPD down with the rest. Since few bond investors have the flexibility to leap down the capital structure no matter how compelling the opportunity, the holders of this debt with 25 years yet remaining must regard EPD’s equity as altogether divorced from reality.

The change in valuations has been stunningly swift, and when the relationship between EPD’s stock and almost every other non-energy equity security is reverting to the mean, it will have all seemed inevitable. Until then, we can simply gaze at charts like these and wonder how the CFA curriculum will one day turn this into a teachable moment.

The Dow’s Odd Construction The Great Reversal?
Scroll to top