Covid-19 is probably the biggest political issue in America today. Liberals see a worsening situation in need of a slower return to normalcy requiring additional fiscal stimulus. Rising infections in Arizona, Texas and Florida provide plenty of quantitative support for this view. Conservatives reject this argument, presenting their own set of data. The restrictions on movement imposed by most states have offended those who perceive an unneeded loss of freedom – some even put face masks in this category, although masking up when in close contact with others seems a fairly trivial courtesy.

The sensational headlines continue to inspire fear, such as Newsweek’s “Texas’ Largest Hospital Reaches 100 Percent ICU Capacity”. The article goes on to add that 72% of that capacity is being taken up by non-Covid-19 patients, which nullifies the headline. This is why “liberal media” has become a term of disparagement. 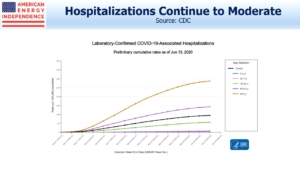 There is data to support the view that the pandemic continues to moderate, and is far less fatal than originally feared.  A well-run hospital is always at 90-100% ICU capacity.  Hospitals can free up ICU beds  by canceling elective surgeries, and redesignate certain beds as ICUs, allowing them to operate at multiples of normal capacity.

Making an optimistic case shouldn’t imply that the proponent isn’t worried about getting sick. A conversation with a friend who was hospitalized for four days convinced me this virus is better off avoided. 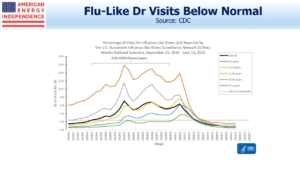 Conservatives note that positive test results are going up, but that it’s due to increased testing. We’re finding more infections because we’re counting more. Liberals counter that the percentage of tests that are positive has edged up over 6%, which means it’s not all down to increased testing. However, this is still far below its peak of 21.8% in April. The criteria for testing have evolved, and riskier groups such as nursing home or prison populations will test higher. Because young people represent a bigger proportion of positive test results, some argue that they’re not following social distancing guidelines. While there are lots of photos to support that, hospitalization data continues to moderate, which suggests that people who are testing positive aren’t as sick. This is true even in Texas, where positive tests results are rising. Nationwide, hospitalizations and the fatality rate continue to fall. Doctor visits for flu-like symptoms are down.

The strongest argument that Covid-19 is unlikely to kill millions comes from estimates of the overall infection rate. U.S. fatalities are 120,000 (defined as people who died where Covid-19 was a contributing factor, although it’s now well known that other contributing factors such as obesity are usually present). Older people are far more vulnerable. CDC data shows that just 19% of fatalities are people under 65 years old. 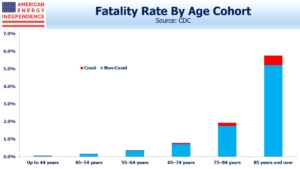 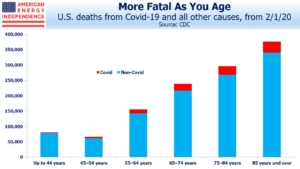 We referenced a research paper on Wednesday (The infection fatality rate of COVID-19 inferred from seroprevalence data) that estimated an Infection Fatality Rate (IFR) for those younger than 70 years old of 0.04% (see Still Spreading, But Less Deadly). CDC data doesn’t precisely align, because they define age cohorts as 55-64 etc., rather than 60-70. But a reasonable estimate is that 30,000 people under 70 have died. 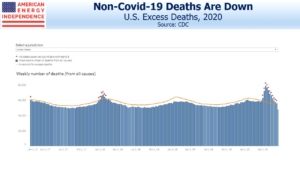 The 0.04% IFR implies that for every 10,000 people under 70 who are infected, four have died. This suggests that 75 million Americans have been infected (30,000 divided by 0.04%). It seems an impossibly high number – and yet, CDC Director Robert Redfield said on Thursday that, “5-8% of the American public has experienced infection, whether they recognized it or not.” This implies somewhere between 16 and 26 million Americans have been infected. With 2.2 million confirmed cases, that means for every positive Covid-19 test, another 7-11 people are infected but not bothered enough to visit a doctor. Redfield’s estimate is for the entire U.S. population, while the 0.04% IFR is for <70. But the two estimates are broadly consistent.

As with much of the data, it can confirm contrasting views. How the Virus Won reflects a Liberal view. Alternatively, for most of this year excess deaths have been below normal, partly because road fatalities are down (usually around 38K annually).  It’s possible that we’ve avoided more deaths from all other causes than Covid-19 has caused, although nobody knows who those fortunate souls are. One Covid-19 death is one too many, but policymakers are responsible for making judgments for society as a whole based on the best data available.