Covid-19 cases are rising, especially in the south. Three weeks ago, my wife and I headed to South Carolina and beyond, where restrictions were limited and nobody we met knew anyone who had gotten sick (see Having a Better Pandemic in Charleston, SC). Masks were scarce, inside dining was permitted and it seemed like the old days. It was a glorious break from New Jersey with its opaque lockdown process and intermittent minor relaxations. However, rising infections in the south are causing some to suggest that people have been too relaxed in their efforts to avoid infection.

Covid-19 has become a political issue, so voting affiliation tends to color people’s attitudes. The New York Times recently posted two graphs that can be harnessed by each end of the political spectrum. The Liberal narrative focuses on the early under-counting of deaths because of insufficient testing (noted below the charts) and the uptick in infections. Covid-19 has killed even more people than we thought, and is spreading. 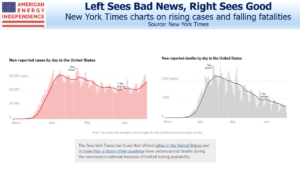 The Conservative perspective looks at the earlier understated number of deaths, which are now being more accurately counted because of more widespread testing, and sees an even faster decline in fatalities. Moreover, the increase in infections doesn’t seem to be arresting the decline. This suggests that we’re simply finding more infected people, because we’re testing more, and not that it’s getting worse. Treatments are improving too, leading to better outcomes.

Since it’s become a political issue, both sides can use the data to argue their case.

The median age of those testing positive is trending younger. In some counties in Texas, the majority of the positive tests are now people below thirty. Dr. David Persse, public health authority for the Houston Health Department, said, “It is my current theory that elder persons have become more vigilant in taking precautions,”

This sounds plausible, since older people are far more vulnerable to suffering serious illness or death from the virus. And the rising rate of infections among young people could reflect their confidence that, even if they contract the virus, their symptoms will most likely be mild or even non-existent (asymptomatic). We’re all growing weary of social distancing with its myriad restrictions on life as we knew it. Younger people seem to be increasingly willing to risk infection, since any negative consequences are likely to be mild. 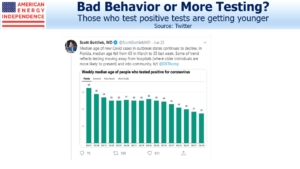 This highlights the problem with requiring low-risk people to follow behavioral rules that protect others that are more vulnerable. It doesn’t seem much to ask in theory, but drinks at a bar with friends can easily seem a long overdue and justified proposition.

San Antonio mayor Ron Nirenberg also believes social distancing is being harmfully ignored, “While they may survive an illness, younger people are going to be stuck with a pretty hefty medical bill at the end of it.” That doesn’t sound like a compelling incentive – hence states like Texas are forced to reconsider how they impose social distancing.

But there’s a problem with this interpretation that age groups are adopting risk-based behavior. For Dr. Persse to be right about older people more successfully protecting themselves, you’d expect to see young people represent a bigger proportion of deaths and older people less. But this data is fairly stable. It looks to us that we are simply identifying more infected people because we’re testing more. Some may argue that deaths are a lagging indicator, but CDC data shows the same stable pattern for hospitalizations too. Although more young people are being counted as infected, the proportion of young people getting seriously ill or dying is not rising. 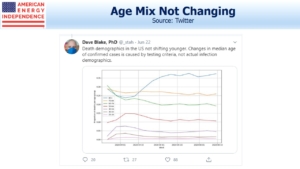 Early estimates of the Infection Fatality Rate (IFR) from Covid-19 were in the 3-4% range, based on data from China that assumed no asymptomatic spread. The New York Times article opens with 2.3 million+ cases and 120,345 deaths, implying an IFR as high as 5.2%. Projecting these IFRs across wide swathes of the U.S. population imply many millions of deaths, so it’s easy to see why governments took aggressive steps to protect people. But now we know that asymptomatic spread is high, which has greatly increased the infection rate. The fatality rate has correspondingly fallen as a result.

A recent paper from Stanford University (The infection fatality rate of COVID-19 inferred from seroprevalence data) has not yet been peer-reviewed, following recent practice to publish first with that caveat, in the interests of sharing analysis quickly. Serology tests estimate the infection rate across a population by looking for antibodies in blood tests. The Stanford paper uses data from 23 such studies, and arrives at an IFR of 0.04% for people under 70. This is why young Texans are drinking in bars and failing to follow social distancing. They probably take more risk getting home from the bar than when they’re inside.