Government bonds provide a useful counterweight at such times – U.S. ten year yields briefly dipped below 1.7%. Knowing when to sell is key to extracting value from the flight to safety.

We regularly note the Equity Risk Premium (ERP), the difference between the earnings yields on the S&P500 and ten year treasury yields. It’s been showing stocks are cheap – on days like Monday, when global stocks were routed on trade war fears, it’s easy to overlook the ERP.

Interest rates remain ruinously low. Last month, in Real Returns on Bonds Are Gone, we showed that profit growth would provide an even more powerful ERP-case for stocks.

Current fears are for a growth slowdown, although bottom-up earnings forecasts on Factset continue to project 11% higher earnings next year. The chart below reflects the impact of a 20% drop in earnings – a substantial decline. Even an outcome as dire as this would leave stocks substantially cheaper than ten years ago. During the financial crisis, earnings fell by 29% over three years, from 2006-09. 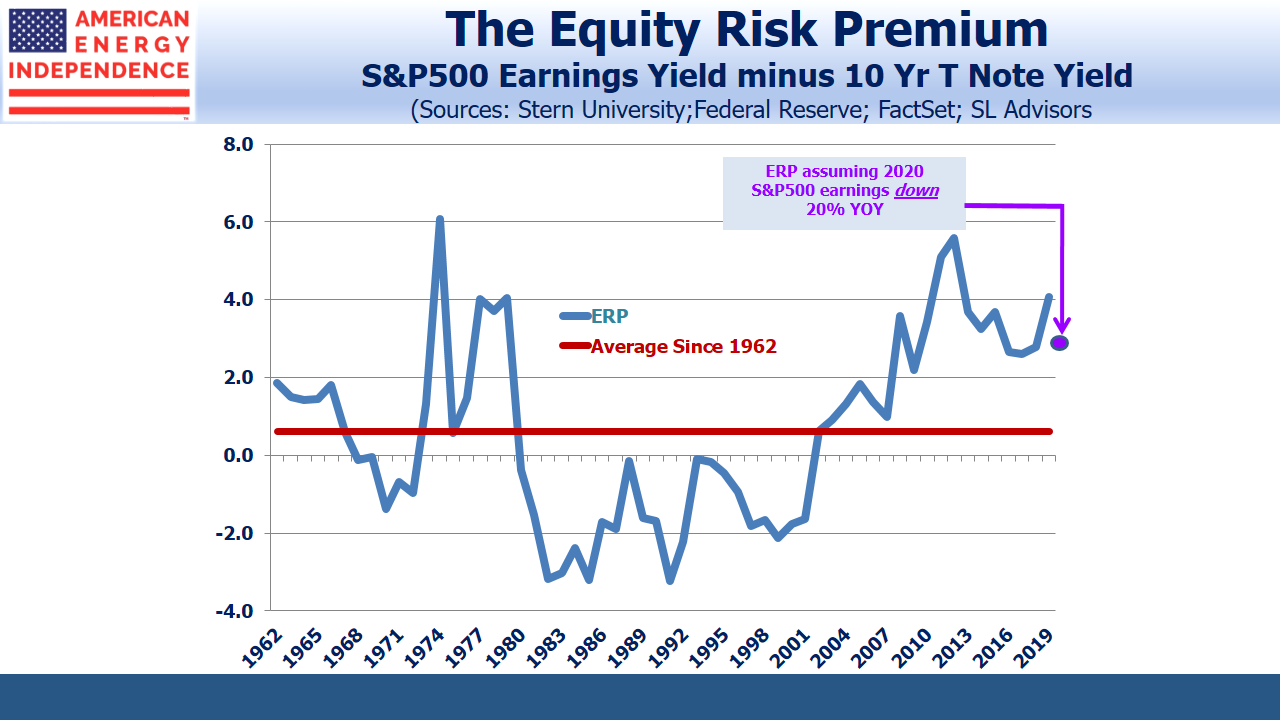 Over $12TN of sovereign debt has negative yields (see Still Fearing Another Financial Crisis). The continued inflexible allocation to fixed income of vast pools of capital reflects widespread fear of another financial crisis. In effect, a 60% drop in stocks with its consequent mean reversion of the ERP is regarded as plausible by a great many large institutional investors.

Over the near term the ERP has little to say on valuations. Trading dominates as much as ever. But over any realistic investment horizon – say a year or more – the math is striking. P/E ratios are historically high, as adherents of Cyclically Adjusted Price Earnings (CAPE) maintain. But bond yields are historically low, and there’s little point in considering either in isolation.

The pricing of financial assets reflects a healthy degree of caution, something easily overlooked when a downturn in trade negotiations hurts risk assets. Trillions of dollars is avoiding stocks in favor of the tyranny of low and negative interest rates. U.S. state and local defined benefit public pension funds hold $4.4TN in assets, $4.2TN less than projections show they need. This 48% funding shortfall isn’t going to be solved by bonds.

We think equities provide a substantial margin of safety compared with bonds for long term investors.