Infrastructure projects can require a lot of planning, but the proposed link by the Alaska – Alberta Railway Development Corporation (A2A Rail) traces its roots back to 1898, when a charter to build a line to Alaska was awarded to the Edmonton & District Railway Company. Canada is perennially challenged to move its bitumen-based crude oil to export markets. Progress on the Keystone XL suffered years of delays. It’s designed to move crude from Alberta to Cushing, OK. Environmental activist opposition under Obama at one point caused TC Pipelines (TRP, then called Transcanada) to take a C$2.9BN writedown in 2016.

The obvious move was Trans Mountain (TMX), an expansion pipeline within Canada to the Pacific coast for export. But this caused such acrimony between Alberta and neighboring province British Columbia that Kinder Morgan Canada eventually gave up, selling the project with fortuitous timing to the Canadian federal government.

Enbridge (ENB) recently told us they wouldn’t attempt to build a new oil pipeline in Canada, unless it was wholly within energy-friendly Alberta.

Against this backdrop, there’s a resurgence of interest in moving crude by rail to export facilities in Alaska. It’s a measure of the unintended consequences of environmental extremists that a higher-cost, riskier route is being pursued. Alberta’s oil production exceeded the takeaway infrastructure so significantly that the provincial government imposed production constraints. Last year the benchmark Western Canada Select (WCS) traded as much as $30 per barrel below the WTI benchmark, ruinous testimony to Canada’s domestic transport constraints. Getting its oil to markets has created fissures within Canada. Albertans feel their net contributions to the Federal budget are unappreciated by the rest of the country.

Few Canadians will soon forget the 2013 crude train disaster in Lac-Magentic, when a fireball engulfed a small town in Quebec, killing 47 people. Pipelines’ better safety record is ignored by opponents of today’s energy, hence reconsideration of the railroad.

The Alberta – Alaska Railway (A2A) will run from Edmonton and Fort McMurray, in the heart of Alberta’s tar sands region, carrying 1-1.5 million barrels a day of crude to the ports of Alaska’s south central coast. It’ll link up with the Trans Alaska Pipeline System, which accesses Alaska’s North Slope oil reserves. Proximity to Asian markets shaves four days off the shipping time compared with ports in the Gulf of Mexico, home to North America’s crude export terminals. 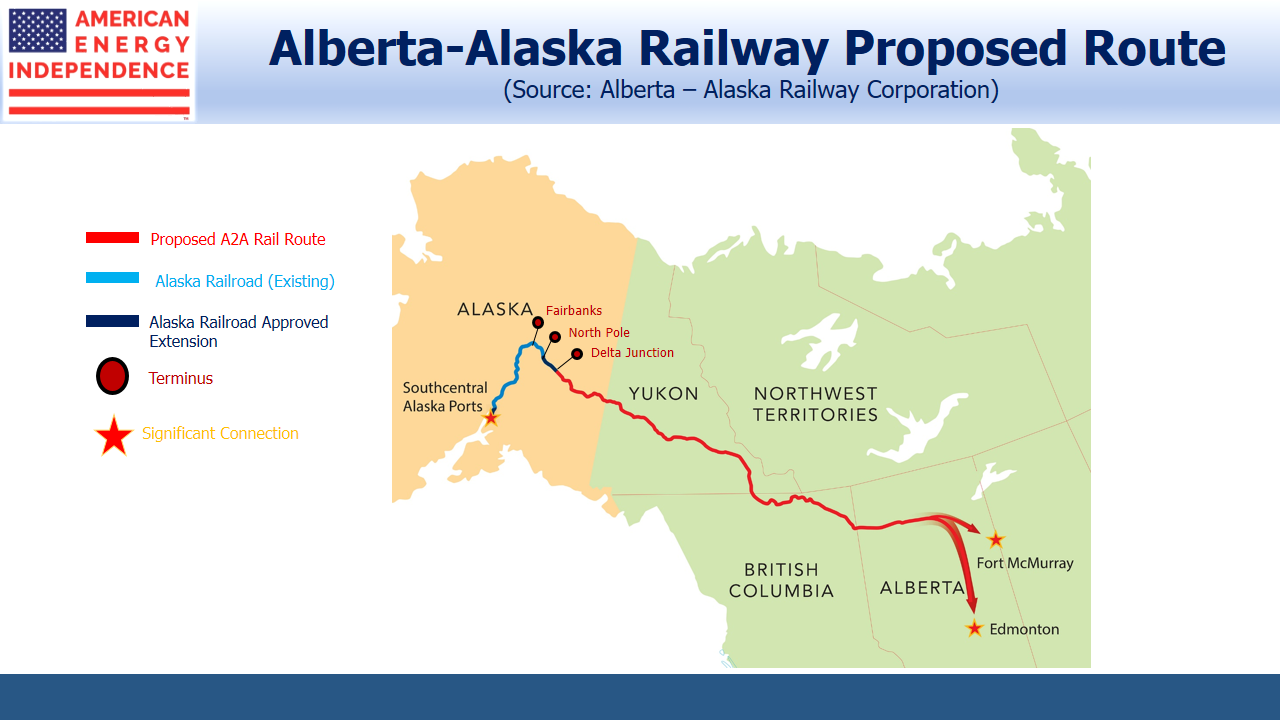 A2A will pass through Canada’s Yukon territory, a remote and resource-rich area. Supporters note that extracting Yukon’s valuable minerals will become more commercially attractive with access to railroad transport. Flexibility is rail’s main advantage over the pipelines, which offer safe, specialized transport just for liquids and gas. Copper, lead, zinc and uranium could be mined and linked by an extension to the A2A, boosting local employment in a sparsely populated and relatively poor region. By promoting benefits beyond global access for Alberta’s crude, the project is aiming for broad support.

A2A may even provide alternative rail shipment for Asian goods coming into the U.S.

The cost is estimated at C$14-20BN, and should find eager investors among the many private equity funds dedicated to infrastructure. Robert Dove, Head of Financing and Strategy for A2A Rail, said, “We anticipate institutional investors will find the long term cash generating ability of the railway to be highly attractive. By providing improved access to export markets for Canadian crude oil as well as developing important mineral reserves in the Yukon Territory, we think there are multiple revenue opportunities for this important infrastructure project.”

In June, A2A Rail reached agreement with the Alaska Railroad Corporation on working together to build the connection. Stakeholder consultations come next, including negotiations with the many indigenous tribes known collectively as First Nations. In many cases opposition can probably be softened with community investments. 121 years after first being contemplated, a railroad from Alberta to Alaska took another step towards reality.

Although there seem to be countless stories about the demise of fossil fuels because of climate change, projects such as A2A reinforce that oil, gas and natural gas liquids will continue to provide the vast majority of the world’s energy for decades to come.

We are invested in ENB and TRP.