We had an opportunity to meet with a Washington-DC based independent research firm, specializing in energy policy and geopolitics last week.  The following is from our notes on their discussion.

On Iran, one principal, a highly decorated ex CIA officer and Iran expert, thought markets continue to underestimate the risk to oil infrastructure and production in the region. He expects tensions to increase in the months ahead, possibly leading to direct negotiations with the U.S. in 3Q20. He expects asymmetric attacks to resume once plans are approved by Supreme Leader Khamenei, with military confrontations in Iraq but energy infrastructure targeted elsewhere in the Middle East. He placed the odds of a major escalation at 25%, most likely as a result of a miscalculation followed by a disproportionate U.S. response (“Trump likely to hit back 10X”).

We would note that U.S. infrastructure assets should look relatively more attractive to investors in the scenario described above (see Gulf Tensions Back in Play). 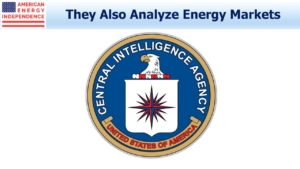 On Libya, he noted that the lost output of 1 Million Barrels a Day (MMB/D) has had muted impact, because OPEC retains excess supply well in excess of that. He also thought that Saudi Arabia was willing and able to make further cuts if needed, as long as others are in compliance.

Contrary to consensus, he sees Venezuela increasing output to 0.8 MMB/D, because the current bottleneck is in marketing. The fact that the U.S. has allowed Chevron and others to continue business in Venezuela suggests a tacit acceptance of exports finding their way to market.

The discussion turned to domestic politics and what changes could be expected with a Democrat in the White House (not currently anyone’s forecast). By contrast with Obama’s view on natural gas, which this policy expert regarded as relatively clean and a “bridge” fuel towards decades-long development of renewables, he noted that today’s Democrats view natural gas as just another fossil fuel. He predicted that a Democrat president would likely impose an immediate ban on new leases on Federal land. Current Gulf of Mexico production is 2 MMB/D, and onshore from Federal land is around 1 MMB/D.

Around 1/8th of natural gas is extracted on Federal lands, but this is more easily replaced with increased production on private acreage. He also expects a new administration would rescind existing permits on Federal land, and although courts would likely disallow this, resolution could take a while. Tighter rules on methane leakage and waste prevention are likely, which would eventually impede production on private land. The granting of infrastructure permits would become highly political, with FERC likely to become partisan. No new LNG export permits should be expected.

Overall we felt there were several differentiated insights from the discussion and wanted to share them.