Before the Shale Revolution, midstream energy infrastructure was a boringly stable sector. MLPs, which predominated versus corporations back then, paid out most of the cash they generated and grew distributions through price escalators and improved operating efficiencies. Volatility was low, and attractive yields drew income-seeking investors. This happy marriage started to fall apart in 2015, when the industry embraced the same growth ethos that drove their upstream customers. Leverage and volatility rose, causing distribution cuts and the older, wealthy K-1 tolerant American investor started to leave (see AMLP’s Shrinking Investor Base). 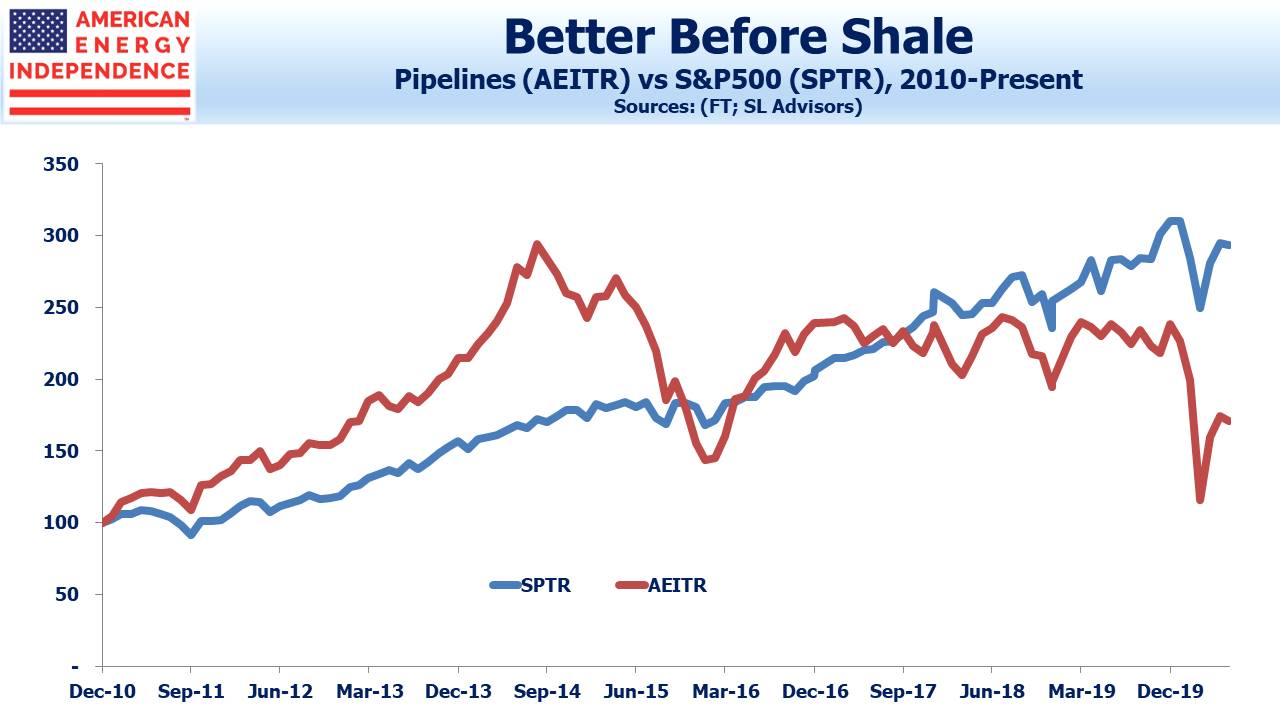 In conversations with investors, the subject of volatility often comes up. Yields are attractive – the broad-based American Energy Independence Index, AEITR yields 9.3% on a trailing basis. Few cuts in payouts are likely as companies report 2Q earnings. Kinder Morgan (KMI) maintained their dividend in Wednesday’s release. Some had been questioning whether Oneok (OKE) would maintain their dividend, but they reaffirmed it on Thursday, yielding 13.4%. Legal uncertainty remains around whether the Dakota Access Pipeline (DAPL) has a secure future (listen to Judicial Over-Reach on the Dakota Access Pipeline). Phillips 66 Partners, LP (PSXP) is most exposed, but they’re only 0.6% of the AEITR. Although Energy Transfer built DAPL and retains 36% ownership, it’s only 3.5% of their EBITDA.

In summary, payment of today’s attractively high payouts is likely to continue. Investors are trying to assess whether they’ll need to endure further downside volatility while clipping coupons.

Relative to the overall market, the movements of today’s pipeline sector are more pronounced but still well short of the 2015 collapse, when energy sector weakness didn’t spill over into the S&P500. Early this year saw the biggest fall in AEITR’s history, but the panic over Covid drove the S&P500 down in the first quarter too, as indiscriminate selling was widespread. Although pipelines have rebounded strongly since then, the AEITR remains down 27% for the year – 10% ahead of the MLP-heavy Alerian Index, but still well short of matching the market, which is in positive territory. 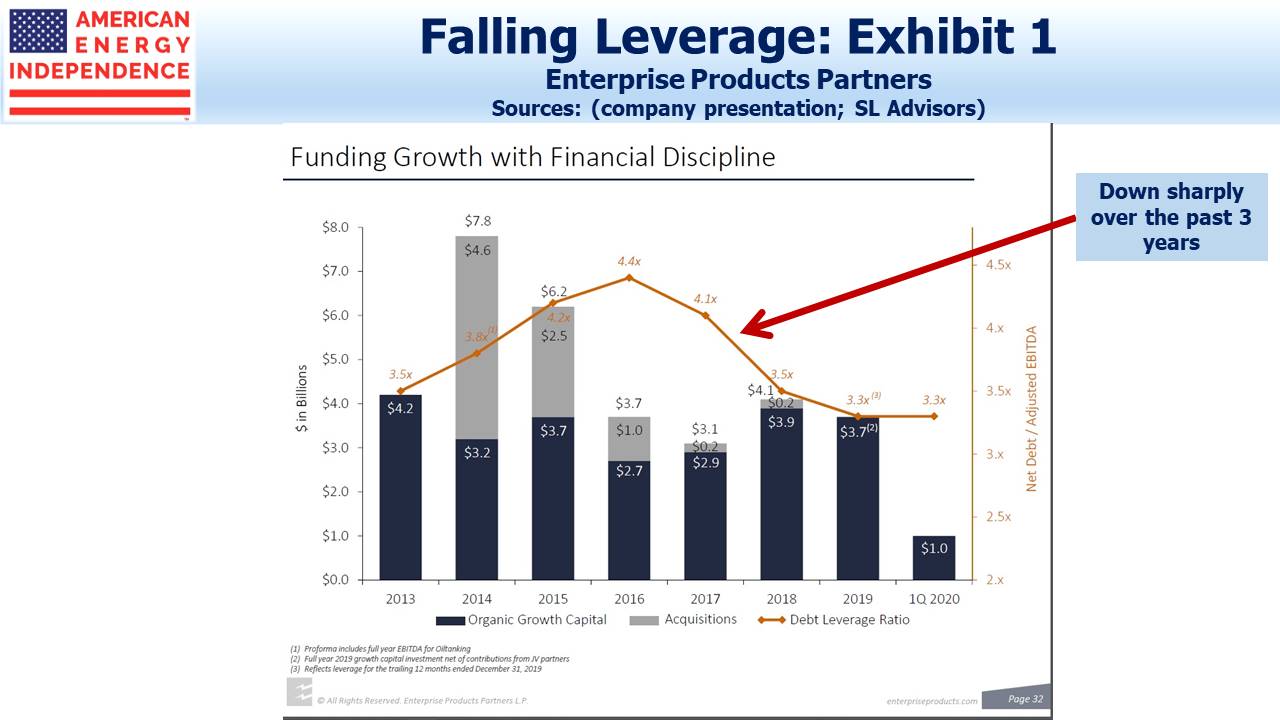 There are three reasons to think that more stability lies ahead for the sector. First, spending on new projects peaked in 2018, and the pandemic has caused every company to further reassess plans for 2020. The result is that pipelines will generate twice as much cash as they did last year (see Pipeline Cash Flows Will Still Double This Year). 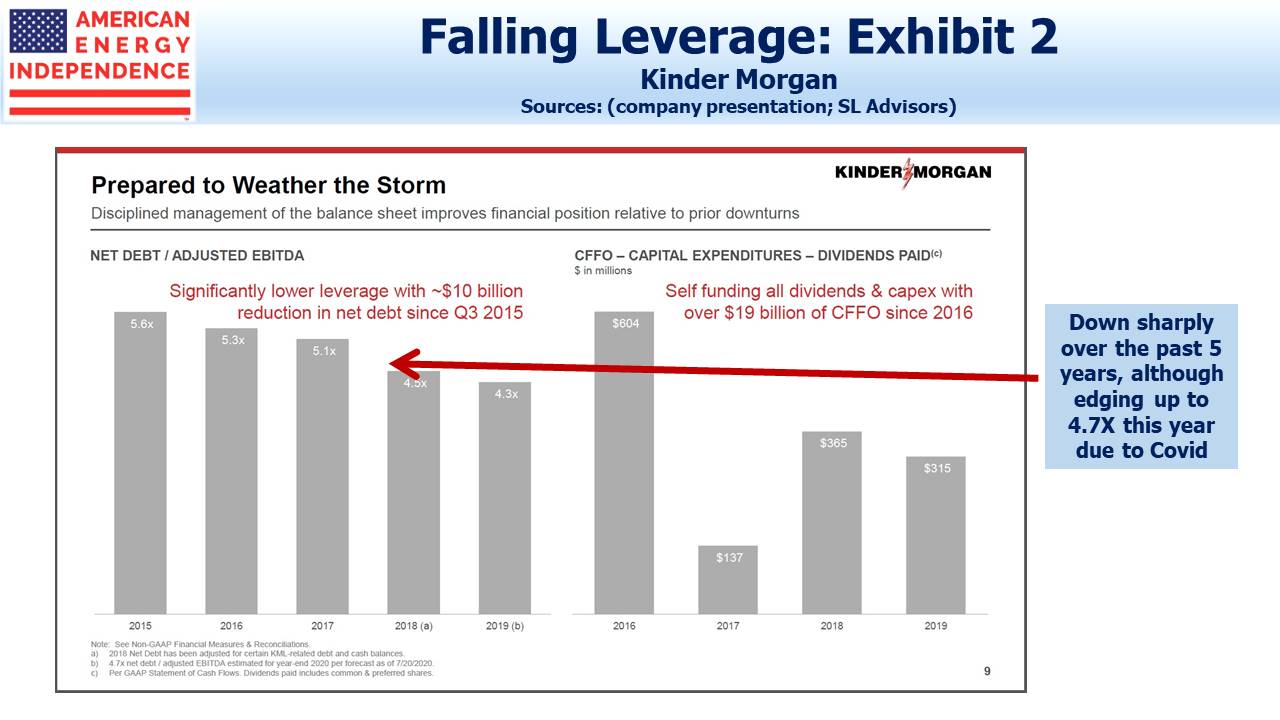 Second, closed end funds, whose selling in March exacerbated an already extremely weak sector, have lost much of their ability to repeat this performance. This is because heavy losses destroyed much of their asset base, a development welcomed by all except those unfortunate enough to have assumed the fund managers practiced any responsible oversight of their leverage (see The Virus Infecting MLPs). 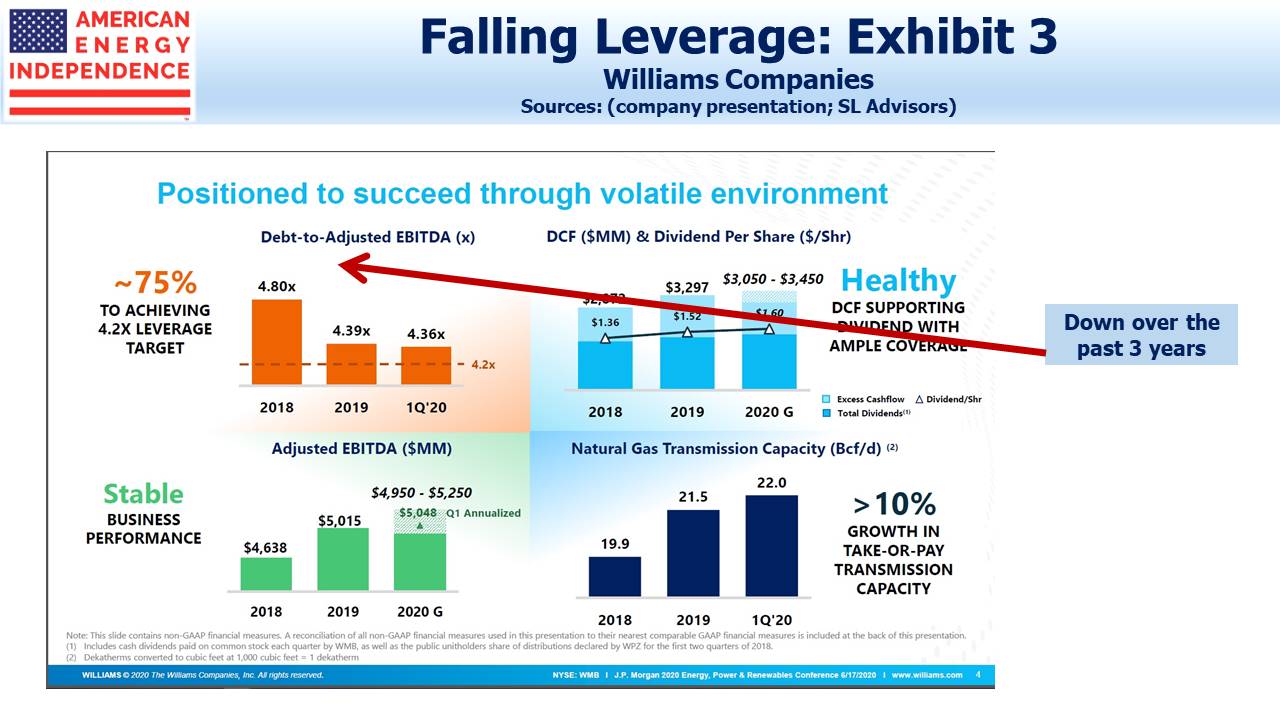 Third and perhaps most importantly, pipeline companies are reducing leverage. These slides from recent investor presentations by Enterprise Products, Kinder Morgan and Williams Companies are reflective of what’s happening across the industry. Stronger balance sheets will reassure rating agencies and investors that sharply rising free cash flow is sustainable.

These are all reasons to believe that tomorrow’s pipeline industry will return to the lower volatility and higher returns of 5-10 years ago.

We are invested in EPD, ET, KMI, WMB and all the components of the American Energy Independence Index via the ETF that seeks to track its performance.