Long-time MLP investors need little reminding that the sector is out of favor. The Alerian MLP ETF (AMLP), with its tax-inefficient structure (see MLP Funds Made for Uncle Sam) has been shedding clients for years (see AMLP’s Shrinking Investor Base). Its focus on MLPs while they dwindle in number means it omits most of the biggest pipeline companies, as they’re corporations. AMLP’s distributions are down by a third (see Why Are MLP Payouts So Confusing?). 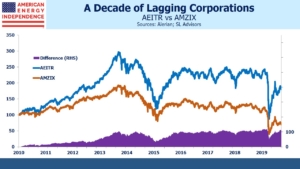 AMLP is designed to provide passive exposure to the Alerian MLP Infrastructure Index (AMZIX). It turns out that pipeline companies haven’t done nearly as badly as this index. The focus on MLPs has always excluded corporations – for many years, when MLPs were controlled by a General Partner (GP), Incentive Distribution Rights (IDR) allowed generous payments from the limited partners in AMZIX to the GP’s. Because AMZIX excluded corporations, it left out many of the GPs who were receiving IDRs payments. Although this model has largely disappeared, the exclusion of most GPs meant that AMZIX included the inferior side of the GP-LP equation. And there remain a handful of MLPs that still labor under the burden of making IDR payments to their GP — all unfortunately included in AMZIX. These include MLPs Cheniere Energy Partners (CQP, controlled by Cheinere Energy Corp, LNG) and TC Pipelines (TCP, controlled by TC Energy, TRP). Avoiding MLPs that owe IDR payments to a parent would have helped AMZIX perform better. 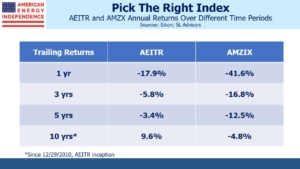 Canadian pipeline companies are among the best run in North America. In recent years they have been acquiring MLPs, rolling them up into the corporate parent. For example, Enbridge acquired U.S. pipeline company Spectra Energy, which included Spectra Energy Partners, its MLP, in 2016. Transcanada (TRP) bought Columbia Pipeline Group the same year, and later rolled up their MLP. All these acquisitions led to the assets leaving AMZIX, because they were no longer housed in MLPs. Excluded from AMZIX but still significant was when Pembina (PBA) bought Veresen in 2017 and also acquired Kinder Morgan Canada after it has sold its Trans Mountain Express pipeline expansion to the Canadian Federal government.

In early 2018, the Federal Energy Regulatory Commission (FERC) surprised investors with a tax ruling that prevented MLPs from including investors’ imputed tax liability in setting natural gas pipeline tariffs. Although FERC later walked back this hasty ruling, the damage was done and natural gas pipelines are largely housed in corporations, where FERC’s tax ruling has no effect.

The general shift from MLPs to corporations as the desired corporate form, so as to access a broader set of investors, has taken place throughout this time. The result is that AMZIX doesn’t reflect the North American pipeline industry (see MLPs No Longer Represent Pipelines). It has the last three big pipeline companies that maintain their MLP status, and a bunch of small gathering and processing names that are more risky. It also has an overweight to crude oil and refined products pipelines, with a corresponding underweight to natural gas pipelines.

AMZIX has wound up with a form of adverse selection – seemingly always on the wrong side of the trade. Holding MLPs that paid IDRs to GPs, rather than GPs themselves; gradually becoming more concentrated as MLPs were rolled up into corporations; and drifting away from natural gas pipelines, leaving them with commensurately more crude oil risk at a time when transportation demand faces a lot of uncertainty.

The American Energy Independence Index (AEITR) was always designed to reflect the better side of the historic GP-LP relationship, and to be broadly representative of the North American pipeline industry. MLPs, as defined by AMZIX and its associated investment product AMLP, have had a miserable decade. But the broad North American pipeline industry as defined by AEITR has done substantially better over multiple timeframes, because of the construction advantages noted above. For almost the past decade it’s performed 14% p.a. better

When an investor complains about lousy MLP performance, they’re right, but they’re also revealing that they’ve had too much exposure to the wrong index.

The Great Reversal? Investors Like Less Spending
Scroll to top