Public policy is becoming more important to energy investors. Democrats now own the climate change issue. The desire of progressives to advance a world of solar panels and windmills is confronting pragmatists who’d like to keep the lights on. Rising oil and gas prices are helpful to the energy transition, by improving renewables’ competitiveness. But $4 gasoline would have political repercussions. So the spirit of St. Augustine prevails (“Give me chastity, just not yet”). Last week U.S. Energy Secretary Jennifer Granholm reported “a productive call with Saudi Energy Minister Abdulaziz bin Salman al-Saud” to “ensure affordable and reliable sources of energy.”

The Administration’s proposed $2TN infrastructure plan is likely to rely on reconciliation to get through the Senate, which means it has to look like a tax/spending plan rather than new laws. Eliminating the filibuster would allow more expansive policies, including on climate change, to be passed with a simple majority rather than the 60-vote filibuster-proof margin.

West Virginia Senator Joe Manchin’s (D) power stems from his less than perfect fealty to Democratic ideals. He is against changing the filibuster, which limits the prospects for new laws including on energy. Manchin wants to, “…usher a new era of bipartisanship where we find common ground on the major policy debates facing our nation.” Hence, Congress can spend money on building an electric vehicle charging network, but can’t impose a carbon tax, even though it’s supported by the American Petroleum Institute.

The Administration’s desired path is to show progress without imposing visible costs, since numerous polls show voter concern about climate change stops once the monthly cost competes with their Starbucks budget. Hence the call to the Saudi oil minister.

Energy investors should welcome the increased political debate. It forces the shrill rhetoric of climate extremists to confront reality. For example, the Texas legislature is considering passing the costs of windmill intermittency back to windmill operators. Texas has enjoyed great success in using more windpower, but the grid’s vulnerability to calm days increases with dependence on wind.

Berkshire Hathaway Energy helpfully showed what intermittency costs, by offering to invest $8BN to build ten natural gas power plants. The proposed Texas Emergency Power Reserve would normally remain idle but could meet any plausible power shortfall by ramping up within ten minutes. The cost of ensuring reliable power would be passed on to customers.

Texas state senator Shelly Hancock (R) has argued that renewable energy providers should instead pay the cost of these natural gas power plants whose main purpose would be to provide back-up power for wind. It’s a reasonable suggestion, but is opposed by renewables operators whose investments were based on a socialized approach to the cost of compensating for intermittency.

The power outages Texas endured last month were caused by multiple failures, including of natural gas plants (see Why Texas Lost Power). But wind and solar power plants are chronically intermittent, with typical utilization of only 20-30%. Despite the outages, natural gas was the only source of power in Texas whose output rose. Renewables often get a free ride by providing power opportunistically with no penalty for unreliability. 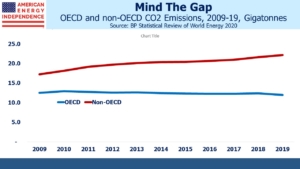 Although CO2 emissions are a global problem, OECD countries aren’t making it worse. All the growth is coming from developing countries, notably China and India. Climate change is supposedly a bigger threat to those less able to afford mitigation. While this ought to make poorer countries big supporters of lowering emissions, raising living standards is a higher priority. The most vulnerable nations don’t share rich world goals aimed at protecting them from rising sea levels.

India’s Energy Minister Raj Kumar Singh offered an articulate summary, “The developed world has occupied almost 80% of the carbon space already. You have 800 million people who don’t have access to electricity. You can’t say that they have to go to net zero. They have the right to develop. They want to build skyscrapers and have a higher standard of living. You can’t stop it.” In other words, it’s their turn to pursue a western standard of living. Until emerging countries acknowledge the problem, it’ll be hard to induce rich world voters to pay for solutions.

The increased political debate is good news for all except the climate extremists still clinging to purist impracticality. Climate change is all about politics and economics. The technology already exists for carbon capture, hydrogen sourced electricity and other zero-emission solutions. They’re just expensive. The diminishing likelihood of extreme policy responses (see The Bovine Green Dream) is removing the always low-probability existential risk faced by parts of the energy sector.

The components of the American Energy Independence Index yield 7% on a market cap weighted basis, and announced buybacks add a further 2%. This helped the index to a 20% return in the first quarter. Past performance is not indicative of future returns.