What if CO2 emissions could be captured before they entered the atmosphere? Sulfur dioxide is already removed from the emissions of coal-burning power plants. Why not CO2 from burning natural gas for power, steel or cement production? The endless hype over solar panels and windmills, overstating their competitiveness, downplaying their intermittency – none of this would be needed any more if we could just keep using the fuels we do without the harmful emissions.

It turns out the technology does exist to partially do this, via Carbon Capture and Utilization or Sequestration (CCUS). Although it’s not a solution for the transportation sector, it can be applied to power generation and some industries. As with most aspects of climate change, the problems are mostly economic and political rather than technological. If there was popular support for higher energy prices to combat climate change then CCUS would already be widely used. But as we noted in Energy Policy Meets Reality, polls show limited support for higher utility bills. Public concern is broad but shallow. 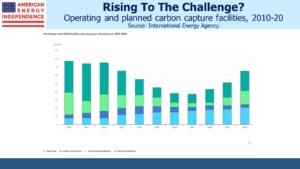 From 2010-17 CCUS investment fell since tax incentives weren’t high enough to support the cost. But CCUS is getting cheaper, and governments are creating greater incentives to curb CO2 emissions. Global development of new CCUS facilities began rising again following the 2016 Paris Agreement. Currently a record 21 facilities are operational worldwide, with another 44 at various stages of development.

Ten of the operating CCUS plants are in the U.S. Their main use is to provide CO2 for Enhanced Oil Recovery (EOR). This involves pumping CO2 into mature oil wells to increase pressure, boosting production. Because of this, CCUS hasn’t historically been linked with combating climate change, although EOR does at least keep the CO2 out of the atmosphere. But CO2 could simply be stored underground without being used, and this is where CCUS promises to be part of the climate solution.

Congress has promoted CCUS for years. In 2008 the Internal Revenue Code Section 45Q provided a $10 per ton tax credit for sequestered CO2 used for EOR and $20 for “geologic storage.” Under current law the tax credit will eventually reach $50 per ton for underground storage by 2026.

The 2020 U.S. Energy Act signed late last year directed R&D at CCUS and directed the Energy Secretary to identify, “… tools the Federal Government can use to advance deployment of carbon dioxide removal.”

Exxon Mobil claims to be the market leader in carbon capture, taking credit for 40% of all the world’s captured CO2 since 1970 and 23% of the CO2 captured in 2019. However, their 9 million tons of annual “carbon capture capacity” barely registers against the world’s 36 Gigatons (1 gigaton = 1 billion tons) from human activity*. Current U.S. CCUS capacity is estimated at 25 million tons annually, around 0.5% of what we produce.

This is increasing activity around CCUS.

For example, last month Valero, Blackrock and Navigator Energy Services launched a JV to build a 1,200 mile CO2 pipeline in the Midwest that will move 5 million tons of CO2 annually into permanent underground storage. In addition to Exxon, other big energy companies such as Total, Aramco and Repsol are investing in CCUS capabilities.

Some pipeline companies are already in the CO2 business. Kinder Morgan (KMI) has provided CO2 for EOR for years, where fluctuating oil prices cause swings in demand. We and other investors have long criticized this business segment for its low returns (see Kinder Morgan: Great, But Stick to Pipelines), but increasing tax credits may offer salvation. Enbridge (ENB) and TC Energy (TRP) are considering CCUS investments. Canada’s carbon tax will support the economics.

The White House’s proposed $2TN spending on infrastructure promises to, “… establish ten pioneer facilities that demonstrate carbon capture retrofits for large steel, cement, and chemical production facilities…” and to expand the 45Q tax credit so that it’s, “… easier to use for hard-to-decarbonize industrial applications, direct air capture, and retrofits of existing power plants.”

CCUS today is small but growing. Cost has usually been the biggest barrier to widescale deployment. But a Democrat Administration looking for tangible results on climate change is likely to improve financial incentives for its further development. This creates another pragmatic alternative to erecting windmills everywhere and is good for the pipeline industry.