On the University of Texas website is a documentary titled Gift from the Earth: Natural Gas. It describes the construction of a pipeline to transport natural gas from Texas to population centers on the east coast, as far away as New York City. The pipeline was built by the Transcontinental Gas Company (Transco), and the documentary is from the 1950s.

Today, Transco has grown into America’s largest natural gas pipeline network. Since 1995 it’s been owned by Williams Partners (WPZ). With some justification, WPZ management describes it as irreplaceable – the cost to acquire the land and easement rights combined with the infrastructure itself would run into the tens of $Billions. WPZ is 6.6% of the Alerian MLP Index (AMZ) and 8.1% of the Alerian MLP Infrastructure Index (AMZI). It will soon be leaving.

Williams Companies (WMB) is WPZ’s corporate parent. They concluded that the advantages of having an MLP had diminished, and that their business will grow faster by rolling up the remaining publicly held units of WPZ (WMB already owns 74%) into the parent. Oneok Inc. (OKE), which absorbed its MLP last year, has an Enterprise Value/EBITDA multiple of 15-16X, a valuation WMB must feel is attainable from its present 11-12X. 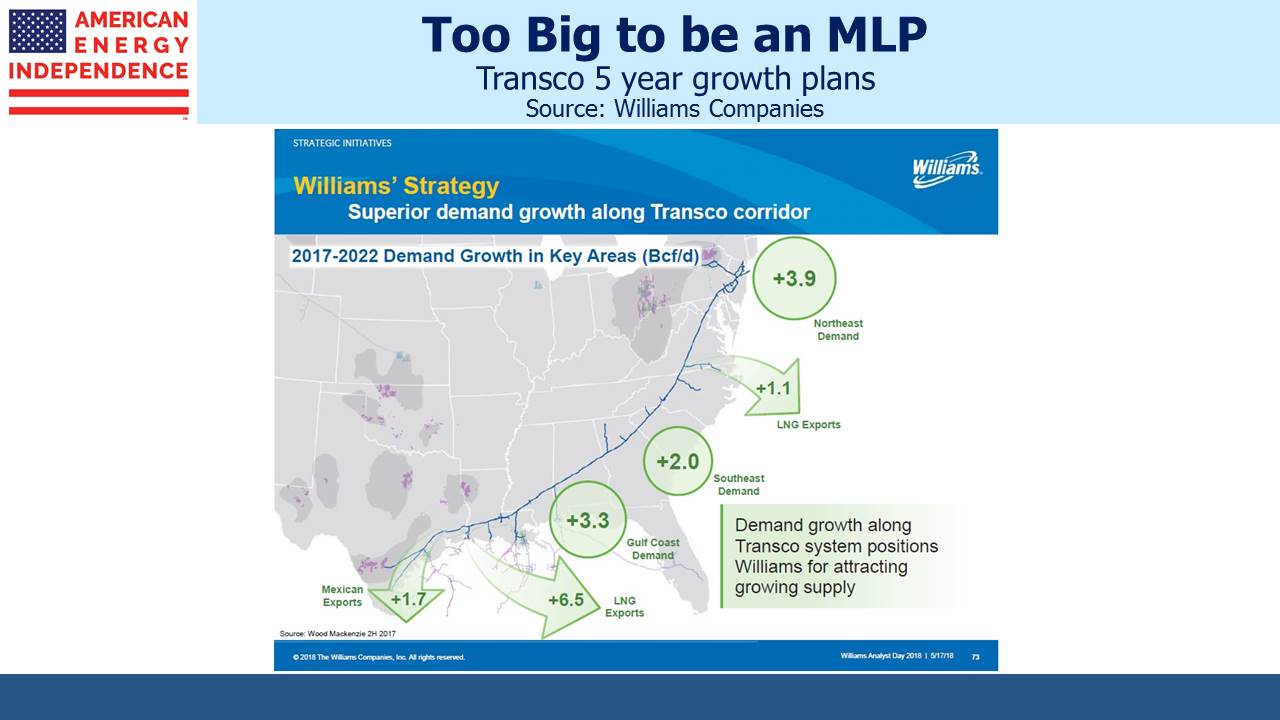 MLPs retained their tax-free status through last year’s tax reform. The problem is that the investor base remains frustratingly narrow. Those who face tax hurdles in buying MLPs include tax-exempt U.S. institutions and non-U.S. buyers, together a substantial percentage of U.S. equity holders. Most individuals are put off by the K-1s rather than 1099s for tax reporting. That leaves older, wealthy Americans whose accountants prepare their tax returns as the main source of equity capital.

Given their dependence on a fairly limited set of buyers, you might think MLPs would have treated them better. These holders were attracted by high, reliable tax-deferred payouts combined with modest growth. The Shale Revolution created new business opportunities that raised leverage, leading to slashed distributions (over 50 so far), and simplifications that come with a tax bill. Betrayed, these older, wealthy Americans now regard with skepticism MLP yields that are historically high, thereby raising the cost of equity capital for the sector.

Having destroyed their original buyers’ appetite, many companies have concluded that they need access to all the global equity investors, which requires being a corporation. On the same day that WMB announced their roll-up transaction, Enbridge Inc (ENB) made a similar move with their four sponsored vehicles, including MLPs Spectra Energy Partners (SEP) and Enbridge Energy Partners (EEP).

Uncertainty over FERC policy (see FERC Ruling Pushes Pipelines Out of MLPs) has also weighed on the sector, prompting some considering incorporation to move ahead.  WMB and ENB are the most recent in a steady stream of companies abandoning the MLP structure. In the past couple of months three other MLPs have made similar announcements, representing in aggregate 13.3% of AMZ (benchmark for numerous funds) and 15.5% of AMZI (benchmark for the Alerian MLP ETF, AMLP) which, absent further changes, will drop from 26 constituents today to 21.

This need not matter for direct holders. If your MLP is absorbed by its corporate parent, your MLP units are swapped for corporate equity securities. The assets are still there. In a now familiar routine, as they part with their WPZ units, WPZ holders will receive a tax bill for deferred income tax as well as a dividend cut (since WMB’s $1.36 dividend multiplied by the 1.494 exchange ratio is $2.03, 17% lower than WPZ’s current $2.46 distribution). It’s WPZ’s third cut in the last four years, so they must be getting used to it. Meanwhile, WMB will create a tax shield for itself through a stepped up cost basis on the acquired WPZ assets, making it 2024 before they’ll be a cash tax payer. This common benefit first drew attention when used four years ago (see The Tax Story Behind Kinder Morgan’s Big Transaction).

The new WMB will finance its growth with asset sales and reinvested profits while reducing leverage. They expect 10-15% annual dividend growth. It’s generally all good for WMB investors. But for many, the bigger story continues to be the impact of a steadily shrinking MLP universe on MLP-dedicated mutual funds and ETFs. AMLP and many MLP mutual funds now combine a tax-burdened corporate structure (see AMLP’s Tax Bondage) with a shrinking opportunity set that will soon exclude America’s biggest natural gas pipeline network. The problem has been growing (see Are MLPs Going Away? and The Alerian Problem).

In an amusing twist, during WMB’s investor day one analyst asked whether they’d considered maintaining Transco’s ownership within an MLP by shifting it into a blocker corporation. This is similar to the structure used by tax-burdened funds such as AMLP. WMB CEO Alan Armstrong replied that the additional corporate tax liability rendered such a solution uneconomic through multiple layers of taxation. In other words, the structure by which AMLP holds WPZ is regarded as unworkable when considered by parent WMB.

The promoters of such poorly structured funds deny a problem, which leaves it to their investors to do their own homework. Fewer MLPs may even cause investors to exit such funds in search of more diversified exposure, depressing prices. ENB’s press release referred to, “…the continuing deterioration in the MLP equity marketplace.”  Their presentation asserts that, “Sponsored vehicles are ineffective and unreliable standalone financing vehicles.” MLPs aren’t going away, but they’re clearly not an attractive choice for companies in need of equity capital to grow.

The problem is one of structure, not fundamentals. U.S. hydrocarbon output is hitting new records, in some cases leaving the infrastructure struggling to keep up (see Dwindling Pipeline Capacity Causes FOMO). The appeal of broad-based, tax-efficient energy infrastructure using mostly corporations is strong.

We are invested in ENB, KMI and WMB. We are short AMLP