The fragile mental state of MLP investors left them ill-prepared for Thursday’s ruling by the Federal Energy Regulatory Commission (FERC). By modifying how MLPs calculate certain tariffs, it sent the sector on another wild afternoon ride. It’s a complex issue – pipelines owned by MLPs that cross state lines and rely on FERC-regulated tariffs are most vulnerable. MLPs can no longer set tariffs by including taxes paid by their investors in calculating full cost of service (since MLPs are largely non-taxpayers themselves).

However, it’s possible to find many exceptions – large swathes of the U.S. pipeline network operate intrastate and are therefore generally not governed by FERC. Many contracts are negotiated or have market-based rates, and there are plenty of cases where customers have few attractive alternatives to their existing infrastructure provider. Pipelines owned by corporations rather than MLPs should be relatively unaffected, while non-pipeline energy infrastructure assets are also immune, including gathering, processing, terminals, fractionation, storage, and Liquified Natural Gas facilities.

But the ruling did provide another example of the complexity in the MLP structure. Investors have already had to contend with management teams redirecting cash flows from payouts to new projects (see Will MLP Distribution Cuts Pay Off?). MLP Limited Partners still tolerate their junior position relative to a General Partner (GP) that retains control, although the GP’s payments received via Incentive Distribution Rights (IDRs) are increasingly being phased out. K-1s have always been unpopular, and compounding 2017’s disappointing performance, users of the PWC website for electronic download are confronting additional authentication requirements that add to the burden of tax preparation.

Meanwhile, the FERC ruling exposed one more element of complexity. Calculating cost of service by including investors’ tax expense is another quirky feature of the MLP structure. Such tax rates are in any case unknowable by the MLP. The market’s superficial understanding of the issue was reflected in the sector’s initial 10% drop on Thursday before recovering approximately half, and by Friday prices were barely changed from prior to the ruling. In any event, few contracts nowadays are negotiated in such a way that FERC’s ruling affects them, compared with older, legacy contracts. Figuring in owners’ taxes turns out to be another anachronistic feature of MLPs.

Investors continue to show their disdain for the sector. Management teams long ago broke the implicit contract of stable payouts. The 30% cut in distributions since 2014 is reflected in the 40% drop in the Alerian Index. CEOs promise that much of this redirected cash will result in faster growth, and 15% annual Free Cash Flow (FCF) growth looks plausible to us. But the business model of attractive yields with little need to reinvest in the business has shifted in response to the opportunities created by the Shale Revolution. The older, wealthy Americans who were long the main MLP investor wanted their distributions, and this pursuit of growth projects has alienated them by disrupting their income. Consequently, the market is waiting to see if new projects will generate promised higher returns. 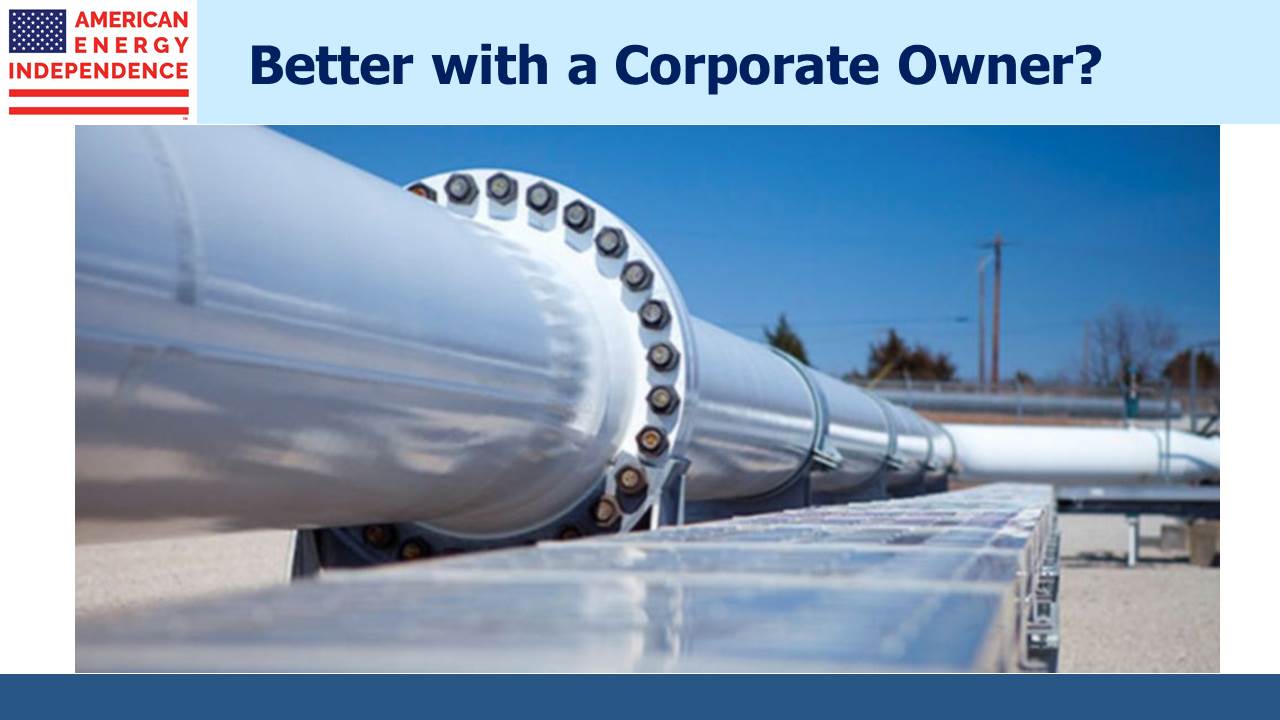 MLPs now represent less than half of U.S. Energy infrastructure, because the MLP has turned out to be a poor source of growth capital. MLPs are far from irrelevant, but they are a shrinking subset. The FERC ruling was another reason to make both investors and MLPs themselves question whether the structure is still worth the trouble. Furthermore, to be an investor in a dedicated MLP fund is to miss most of the sector as well as incur a substantial corporate tax drag (see AMLP’s Tax Bondage).  Broad exposure to energy infrastructure through a RIC compliant fund that caps MLP investments at less than 25% looks increasingly preferable.

Earnings calls often include grumbling that private equity, with its locked up capital, is outcompeting public MLPs for projects. Energy Transfer’s Kelcy Warren complained, “We lose out on projects routinely these days to private equity, not really to our peer group… there’s just a lot of private equity that hires management teams and they’re in for the short term. But it doesn’t matter, they’re winning and we’re not.”

FERC’s Thursday ruling on tariff calculations added another source of volatility to a sector not short of it. Later in the day, Enterprise Products Partners (EPD) CEO Jim Teague stated, “We do not expect the revisions to the FERC’s policy on the recovery of income taxes to materially impact our earnings and cash flow,” Other large firms soon followed, including Kinder Morgan. So the market’s initial response was disproportionate, but its vulnerability to a relatively obscure issue simply highlighted unnecessary complexity.

Energy infrastructure assets are doing fine, but the MLP entities that own them are taking a succession of body blows. The corporate ownership of energy infrastructure assets, with its access to worldwide equity investors and simpler tax reporting, is looking ever more attractive. On the week, the narrowly MLP-focused Alerian MLP Index was -2.9% whereas the broader American Energy Independence Index was -1.0%, as investors favored corporate ownership over MLPs following FERC’s ruling.

Investors in MLP ETFs such as AMLP, and similar MLP-dedicated mutual funds, already face a corporate tax drag (see again AMLP’s Tax Bondage). They are likely to see MLPs continue to lose favor as a financing vehicle, with a consequent diminution of names to hold. Investors who desire to profit from the Shale Revolution and the path to American Energy Independence should switch out of MLP-focused, tax-impaired MLP funds and into broader energy infrastructure exposure relying on simple corporate ownership of assets with no tax drag.

We are invested in Energy Transfer Equity (ETE), EPD and KMI