Talk about MLPs nowadays and pretty soon you’ll get to crude oil. Few will quickly forget the collapse in crude from 2014 that led to the collapse in MLPs. To be an MLP investor seemingly requires a view on the price of what moves through their infrastructure (although only 7% of pipelines in the U.S. carry oil; natural gas, natural gas liquids and refined products are more dominant).

Since pictures can be more eloquent, we’ve produced some visual insight to the long term relationship between the two. Going back to 1996 (the start of the Alerian Index) crude and MLPs have sometimes moved together and sometimes not. However, an investor who had the foresight to call oil’s sometimes violent but ultimately limp twenty year move from $19.50 a barrel to $43 today might have been dissuaded from buying MLPs. He would have missed a thirteen fold increase in value. 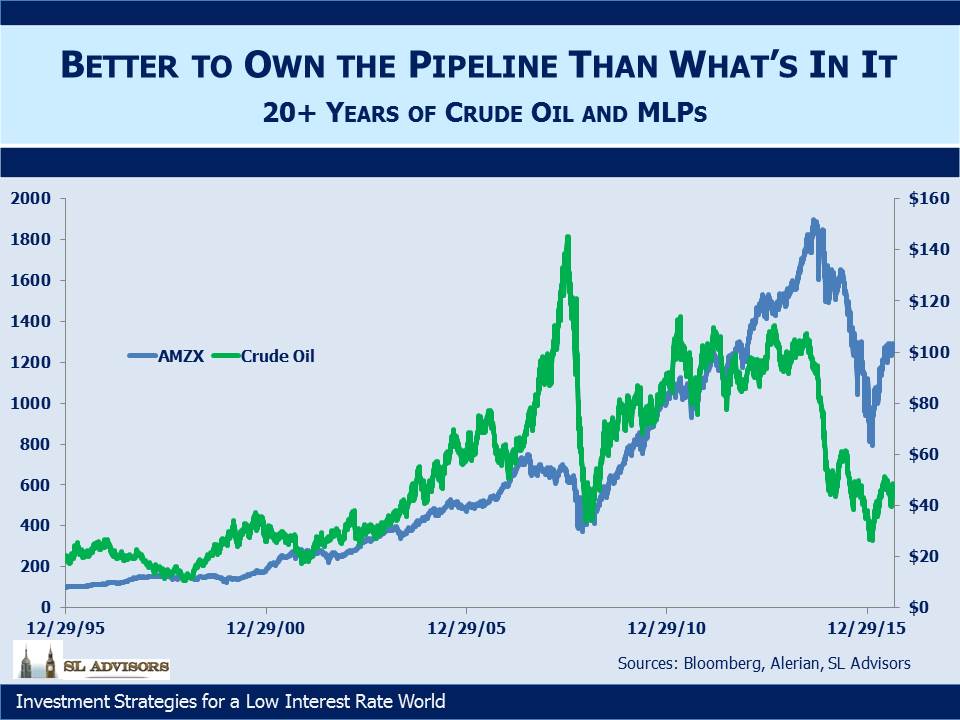 However, we’re not trying to forecast the level of one from the other but their respective returns (forgive me, their first derivatives). How will changes in crude oil affect returns to MLP investors? Both have moved up over twenty years, but not always together as the second chart shows. 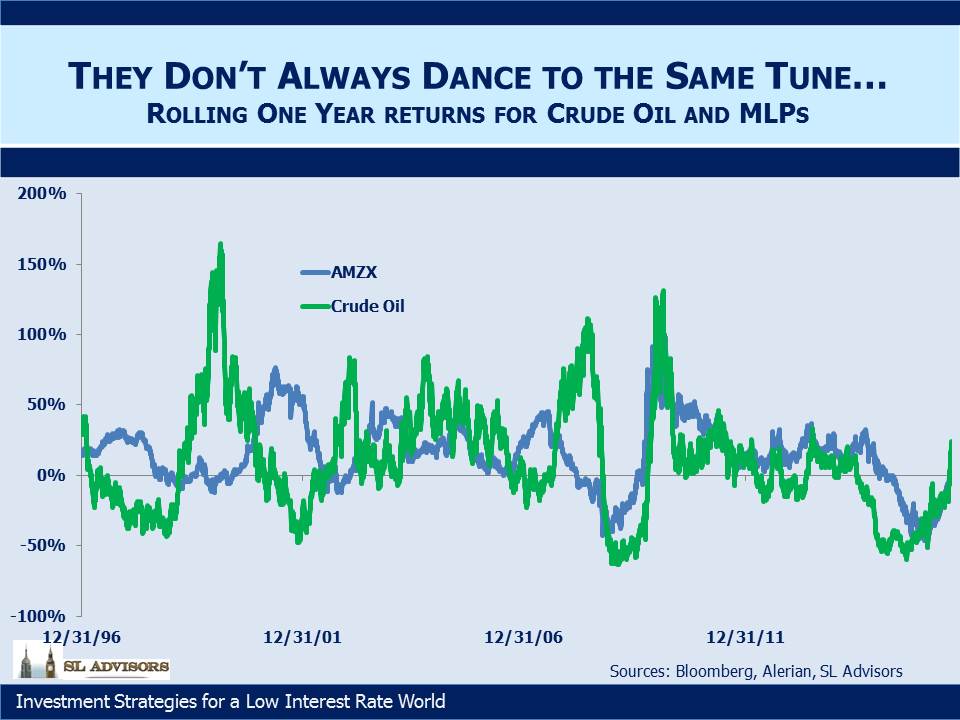 And the third chart confirms what we all knew anyway, which is that their returns have become more correlated. In fact, the past couple of years have seen a dramatic shift in the relationship. In June 2014 the correlation was 0.1, which is to say there was effectively no relationship at all. Since then it has tightened to levels last seen in the 2008 financial crisis, when everything apart from government debt was falling. 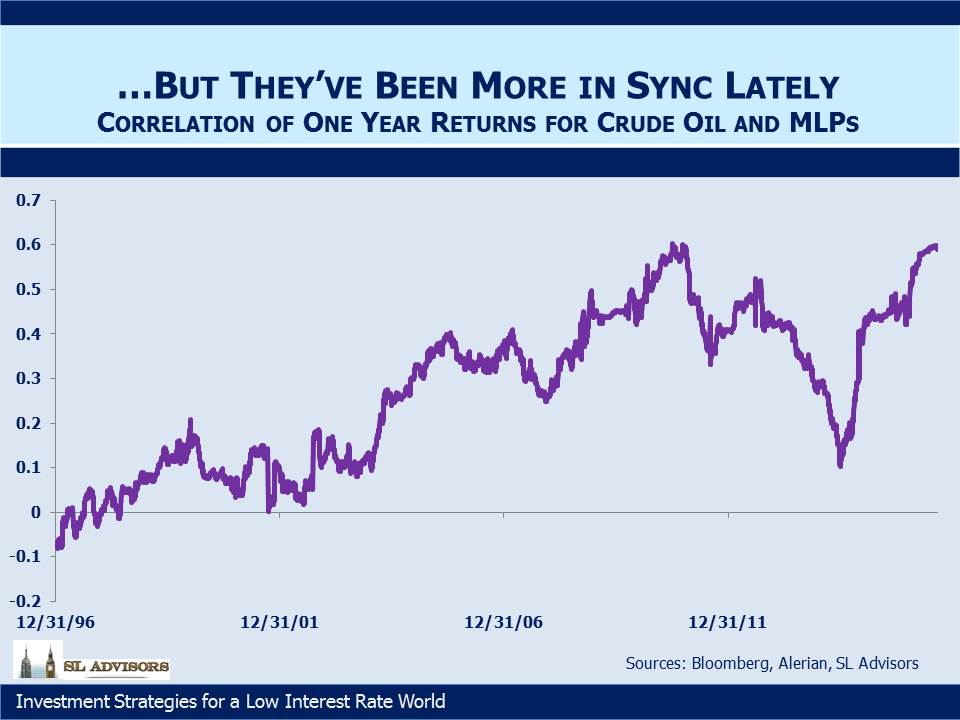 Having examined the past, what can we conclude going forward? First, correlations tend to mean-revert, and it’s not a big leap to suggest that MLPs and crude oil will decouple to some extent. The three month correlation of daily returns (not pictured here) is more sensitive than the 12 month correlation we’ve used, and it shows that the relationship has weakened in recent weeks.

Another point to note is that correlations across asset classes in general are moving up. Stocks and bonds have both been registering new highs. As MLPs have recovered from their February low they become more highly correlated with both asset classes (although at still 35% off their old August 2014 high a switch from almost anything into MLPs looks attractive). And in fact, MLPs have demonstrated a more meaningful relationship with stocks both recently and over twenty years. So the more pertinent question for the potential MLP investor is to ask where stocks are going, but perhaps that seems both obvious and unanswerable, so attention shifts back to crude. 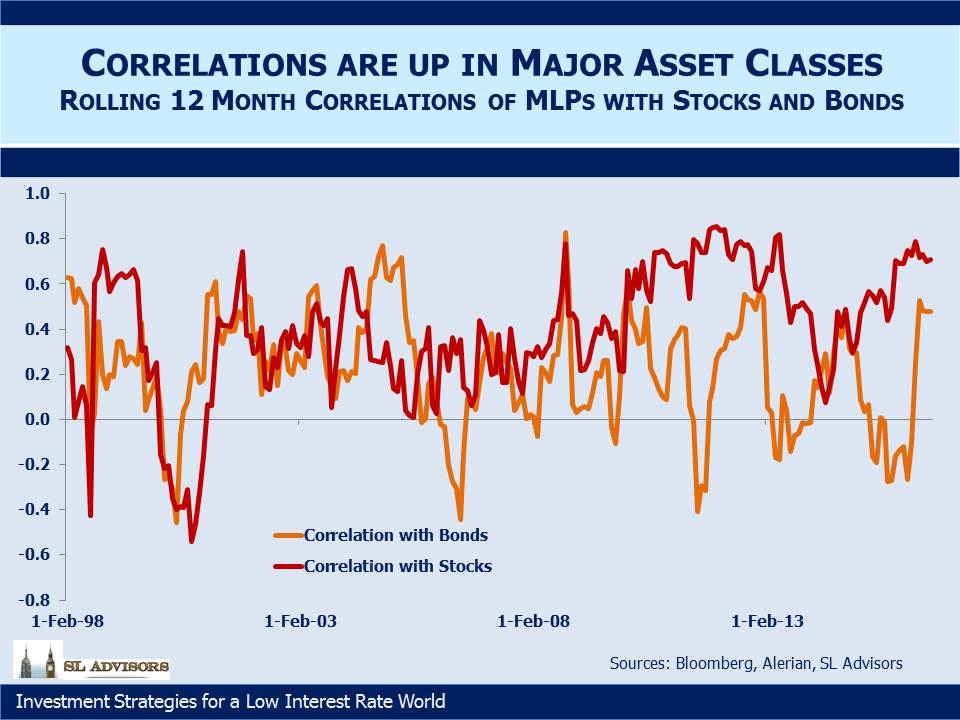 We think the correlation will come down from current levels. But as U.S. hydrocarbon production increases our economy will gradually enjoy less of a consumption boost when crude oil falls. Traditionally, cheaper gasoline has been regarded as a tax cut, but many economists were surprised at the muted boost to consumption that we saw last year.

We also think the long term outlook for crude oil is positive. $1TN of cuts in drilling budgets through 2020 will make it hard to source new supply needed to offset roughly 5MMB/D of depletion and another 1.0—1.5MMB/D of new demand. We wrote about this recently in Why Oil Could Be Higher for Longer.

It’s perfectly natural for investors to mention crude oil and MLPs in the same breath. But we think the strong recent relationship will weaken, and industry fundamentals will dominate again.