In our recent blog post America Is Great!, we described the success of America’s shale producers in the face of OPEC’s intention back in 2014 to bankrupt them with lower oil prices. The recent agreement on reductions in output was a concession that this strategy had failed (see OPEC Blinks). America’s private sector had bested countries representing more than a third of global oil production.

The Permian Basin in West Texas represents this success more clearly than just about any other region in the U.S. It chiefly consists of two areas, the Delaware Basin and the Midland Basin, with several plays within each region. The Permian has been a source of crude oil production in the U.S. for decades. The first commercial oil well was completed there in 1921. As the Shale Revolution took hold over the last ten years, Permian output rose along with other plays. But such is the opportunity, combined with continued technological improvements in drilling, that output barely dipped in 2015 even while other shale regions saw cutbacks. Today, almost half the active drilling rigs in the U.S. are in the Permian Basin. This is driven by the productivity of Permian wells, where production from new wells has more than tripled over the past three years. 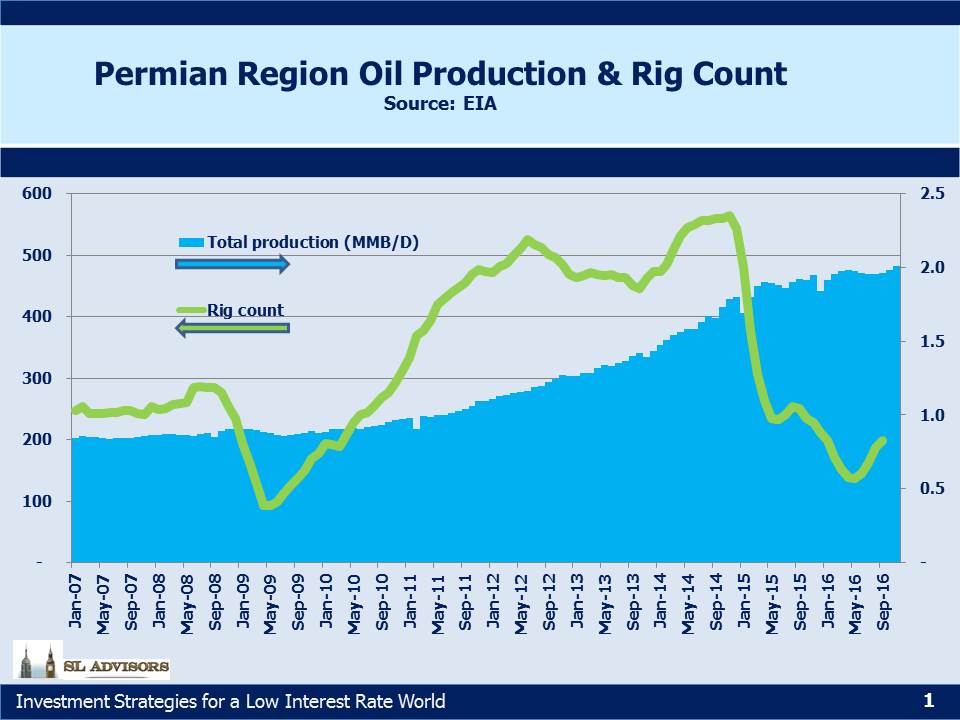 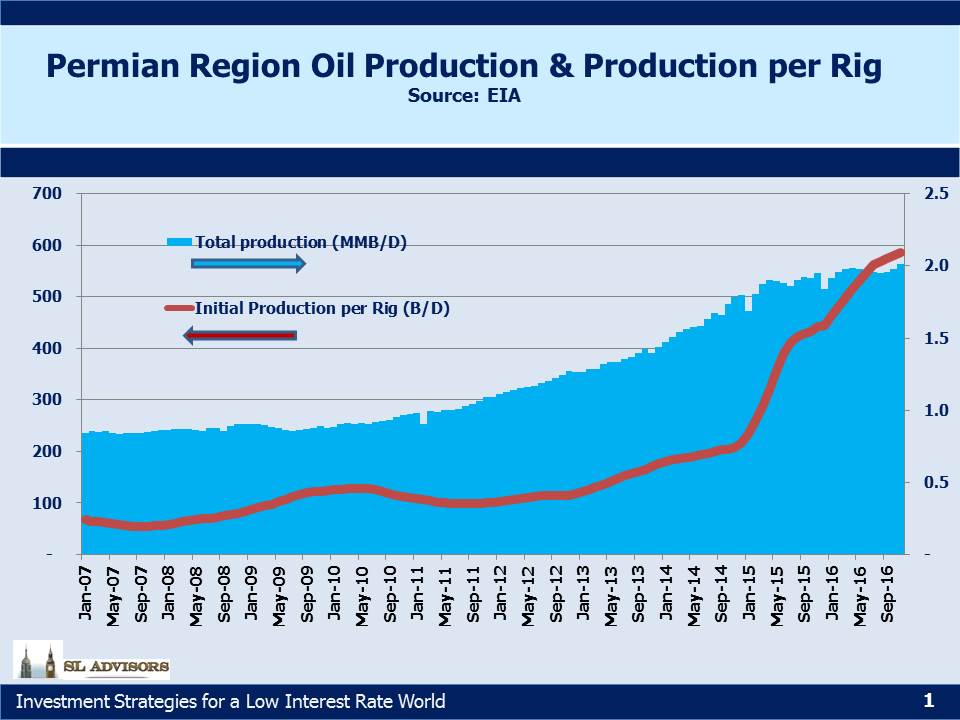 The Energy Information Administration’s (EIA) recent Annual Energy Outlook 2017 forecasts Permian crude production to increase by around 40% over the next five years based on current futures prices. If crude oil trends higher, the Permian holds the potential for significantly greater output than that.

The irony of this is not lost on an investor in Master Limited Partnerships (MLPs). We were originally led to expect stable income that grew steadily each year. The Shale Revolution added excitement and substantial upside to this originally rather pedestrian story, but also exposed the frailty of the more recent investor base. The bear market of 2015 was so clearly a problem of MLPs confronting growth opportunities whose capex needs exceeded their current cashflow (see The 2015 Crash; Why and What’s Next).

The collapse in MLP prices led energy infrastructure businesses to achieve greater alignment between their funding and investment opportunities. Energy Independence, never previously attainable, came into view as a realistic goal within less than a generation. Adapting our existing energy infrastructure network to support this vision is creating substantial opportunities for today’s leaders. Being an MLP investor today inevitably requires studying the markets for oil, Natural Gas Liquids (NGLs) and natural gas. Sales made by investors in late 2015/early 2016 will rank up there among the biggest missed opportunities of all time.

The Permian is now the target of a veritable land rush as some of the world’s biggest oil companies seek to increase their presence. Exxon Mobil (XOM) just agreed to pay $6.6BN for 275,000 acres. Noble Energy bought acreage for $2.7BN. The region has seen over $25BN in acquisition activity since June.

Memories of the global glut caused by North American production are still fresh. Now that U.S. production is increasing again, there are fears of a repeat. The world needs 6 million barrels a day of new supply each year to replace depletion from existing wells and new demand. We don’t think a second collapse is likely, but in any event U.S. shale producers have shown that they’re better able to withstand such an outcome than others. Meanwhile, in China for example, oil output has entered long term decline, creating one new source of extra demand for imports.

Growing Permian output will use up some of the extra take-away capacity, including for Plains All American (PAGP) who estimate they could see up to $600M in increased EBITDA as output grows.