The positive Presidential Covid test has provided plenty of material for the media. Trump’s known physical disposition is being compared with tables of statistics to assess his likely prognosis. The Financial Times noted that he is in the “vulnerable” population, and gave him 20% odds of requiring hospitalization with a 5% risk of death. Regardless of politics, writing about a living person’s chances of dying strikes me as rather tasteless, although inevitable since it’s the president and the election is a month away. 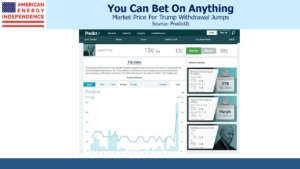 More interesting than mortality tables was the reaction on PredictIt, a website that allows modest wagers on numerous electoral outcomes. Many believe that betting markets offer more accurate forecasts than opinion polls, presumably because people are more thoughtful when money is tied to their view. PredictIt showed that the odds of Trump dropping out of the race before November 1 had soared from 4% to as high as 17% on high volume, following his positive Covid test. 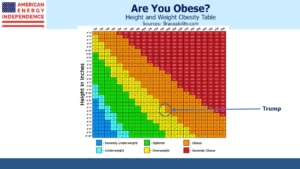 This seems odd, because it’s hard to conceive of any sickness that would cause Trump to withdraw. And if he really does succumb to the virus, his name will remain on the ballot. The only plausible way he’s withdrawing by November 1 is if he concludes an overwhelming defeat is inevitable, when he might declare the entire election a sham hopelessly distorted by mail-in ballot fraud, paving the way for a challenge of the results. This has nothing to do with Covid, and the reaction of PredictIt shows that even the commitment of modest sums of money doesn’t assure a rational view. The Robin Hood trading platform offers another rich source of financially irrational actors. 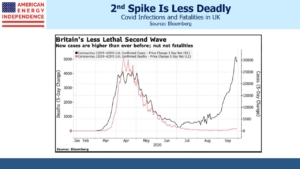 The 5% Case Fatality Rate (CFR) referred to by the FT relies on a study from OurWorldInData, which estimated the CFR for different age groups by looking at just four countries (South Korea, Spain, China and Italy). This limited data set took no account of any pre-existing conditions (“comorbidities”). A study in June from the Center for Global Development (“CGD”) took a more precise look, and found that a male aged 70-79, with at least one co-morbidity living in a rich country, had a CFR of 4.35%. Take away any pre-existing condition and the CFR drops by 89%, to 0.48%.

Trump’s pre-existing health conditions, if any, are unknown. He claims to weigh 235lbs, which for his height puts him on the threshold between overweight and obese but well short of severely obese. The 4.35% CFR doesn’t differentiate between one or several co-morbidities.

Trump’s debate performance didn’t show shortness of energy, regardless of whether you found the content appealing or not. There’s little public evidence that he’s chronically sick.

Moreover, the CDG study is from June. CFRs keep improving – although infections are rising again in many countries, fatalities are not. More testing, better treatment and a less fatal strain of the virus are among the possible explanations. It’s likely the CDG study would produce lower figures if the data was updated. And Trump will be receiving the best care available.

The absence of any formal training in virology has not prevented us from offering a data-based view on Covid. So for Trump, the odds are high that he’ll emerge from self-quarantine reporting a mild case easily handled, confirming his assertion that widespread popular fear of the virus is unwarranted.