Energy has rebound strongly from the market’s low on March 23rd. The S&P Energy ETF (XLE) is up 64%, matching the broad-based American Energy Independence Index (AEITR) and handily beating the S&P500 which is up 31%%. Although the YTD figures still show the energy sector down over 35%, quarterly earnings reports continue to provide plenty of positive news (see More Solid Pipeline Results, Pipeline Payouts Holding Up and listen to our recent podcast, Pipeline CEOs Provide Optimism).The story with MLPs continues to be less positive. 24 have now reduced or eliminated distributions in recent weeks, according to MLPData.com. The Alerian MLP ETF, AMLP, reduced its distribution again last week, such that it’s now 50% lower than five years ago.

This reflects the general trend of MLPs in recent years.Investors in MLP closed end funds (CEF) have had an even worse deal. Many CEF fund managers exhibited reckless arrogance in maintaining maximum leverage during the collapse in March (see The Virus Infecting MLPs). The strong rebound in energy hasn’t helped much – for example, the Tortoise Energy Infrastructure fund (TYG) is still down 75% for the year. Like other MLP CEFs, they were forced to dump positions at the lows in late March, locking in permanent losses and increasing the unrealized losses of those investors who prudently avoided leverage.
Tortoise recently followed this up by announcing they were suspending distributions on three of their MLP CEFs. MLP investors are by now de-sensitized to such abuse. MLP CEFs have destroyed enough capital that they’re no longer a meaningful factor in the sector. 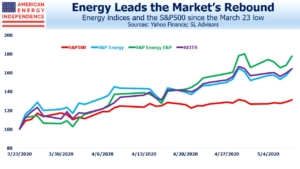 MLP earnings calls have included some long overdue criticism of management teams. The sycophantic analyst who precedes his question with “great quarter guys” is receding as investors count the cost of poor management. JPMorgan’s Jeremy Tonet questioned Enlink’s generous stock-based compensation, which he pointed out was an eye popping $9MM in the quarter, and quite dilutive. It’s a transfer of over 1% of the company’s market cap each quarter. Tonet followed up as seeming bewildered as to what were the key metrics for that compensation, since it’s been relatively constant for several quarters while the business has deteriorated.

Plains All American, a large crude oil pipeline operator, received some pointed feedback from Ganesh Jois of Goldman Sachs: “Firstly, on your CapEx outlook for 2021 and beyond; in a flat to declining U.S. production environment, I’m wondering what it is exactly that you might be thinking of spending on? And the second question I have is, we’ve now seen 3 distribution cuts from you all. At what point is a unitholder going to be prioritized when it comes to capital allocation, as opposed to bondholders and generally asset build-out?”

In other words, why are they still spending any money on new crude pipelines. They just took a $2.5BN impairment charge, the cost of overpaying for acquisitions in years past. They’re still planning to spend $1.1BN this year. As serial mis-allocators of capital, you’d think they’d take a break from it for a few quarters.

The contrast with bigger corporations like Enbridge and Pembina is stark. These companies keep paying their dividends and have a conservative culture that rewards investors over the long term.

The lesson is increasingly clear; pipeline corporations generally have better corporate governance and are run more conservatively. Most MLPs are to be avoided. The big ones (Enterprise Products; Energy Transfer and Magellan Midstream) are worth holding, but many smaller MLPs that too often look as if they’re run for the benefit of management should be avoided.

MLP-dedicated funds, such as the now diminutive MLP CEFs mentioned above as well as AMLP, are stuffed full of the MLPs which have few other natural buyers. The outperformance of pipeline corporations versus MLPs is well established, and likely to continue.

We are invested in the names mentioned above.

The U.S. Borrowing Pandemic How Risky is Dining Out?
Scroll to top