In recent years as MLP investors balked at providing the growth capital sought by midstream energy infrastructure, the biggest companies have been converting to corporations (see MLPs Searching for a New Look). The collapse in MLPs during 2014-15 slowed investment, subsequently causing many of the biggest companies to simplify as they concluded that the MLP investor base was too narrow. This shift away from MLP buyers (mostly older, wealthy Americans) to the global equity investor is evidently working, at least based on one trade group’s forecast of new investment. The Interstate Natural Gas Association of America (INGAA, not limited to natural gas in spite of their name) lobbies for industry-friendly policies and produces long term forecasts of midstream infrastructure investment in the energy sector. They see a bright future for North America.

Given the renewed focus in recent years on prudent distribution coverage with lower leverage, it’s striking that 2019 is likely to be a record year for investment in new capacity. Following two years of decline as companies grappled with income-seeking investors unwilling to finance growth, in 2017 capex rebounded. The recovery has continued strongly, driven in large part by increasing export capacity for crude oil, Natural Gas Liquids (NGLs) and natural gas. The path to American Energy Independence is paved by such investments. 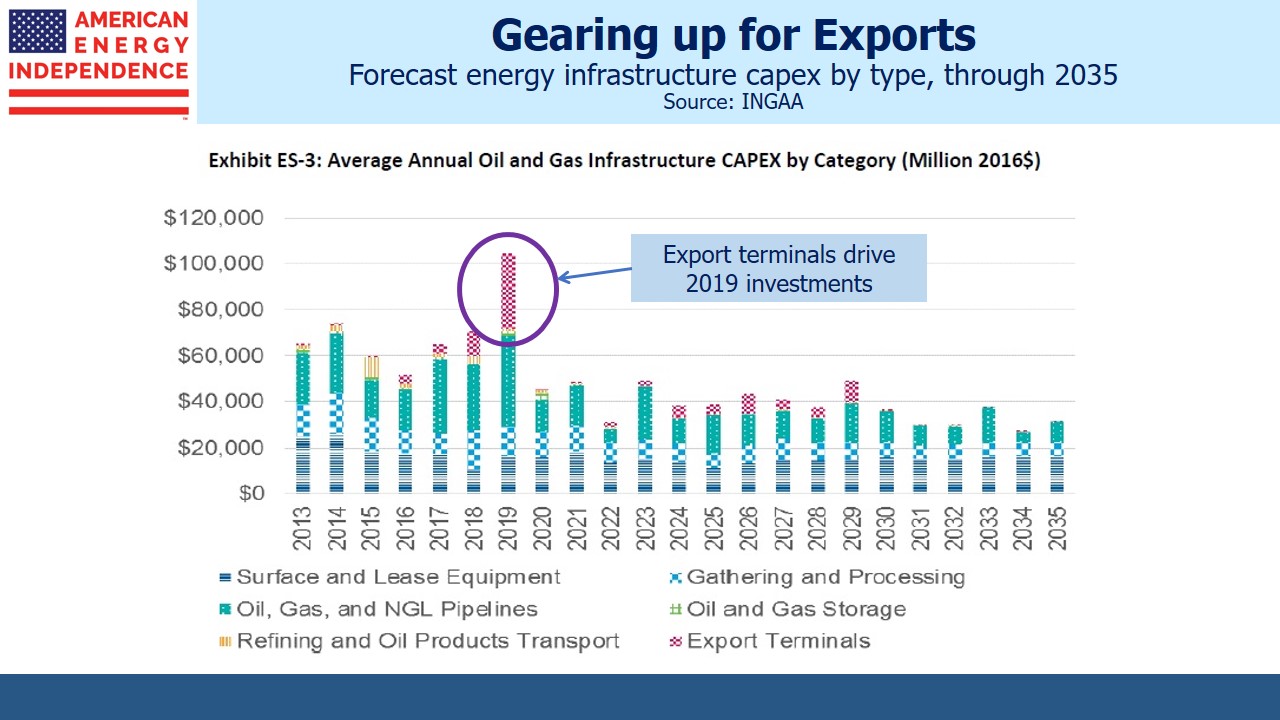 It’s interesting to compare INGAA’s current forecast with their prior one, which we covered two years ago (see There’s More to Pipelines Than Oil). INGAA has modified their format and their forecast period covers a slightly shorter time period. But after adjusting for differences, we find INGAA’s latest projection to be 39% higher than their 2016 Upside Case, at $44BN of annual investment.

It’s a remarkable statement about the resilience of the Shale Revolution and how America’s Energy Renaissance is evolving. INGAA’s prior report reflected the still raw memories of the 2014-15 energy recession, when questions lingered about the sustainability of the new, unconventional production.

Today, with production of crude, natural gas and NGLs all hitting records, there can be little doubt that the industry has shifted to an era of long term growth.

Natural gas continues to command over 50% of new investment. Although movements in crude oil pricing continue to drive short-term sector returns, natural gas remains the more important commodity. Exports, by pipeline to Mexico, and as Liquified Natural Gas (LNG) globally, are both set to rise sharply in the years ahead. Net U.S. LNG exports in 2035 are forecast to reach 12 Billion Cubic feet per Day (BCF/D), from around 1.3 BCF/D currently. Overall, North American natural gas output should rise 2% annually, from 91 BCF/D to 130 BCF/D. Natural gas use in the power sector is also expected to show healthy growth, both as coal-fired plants are retired and as a backup for renewables. We’ve long asserted that natural gas is critical to increased use of renewables, to provide baseload power for when it’s not sunny and windy. 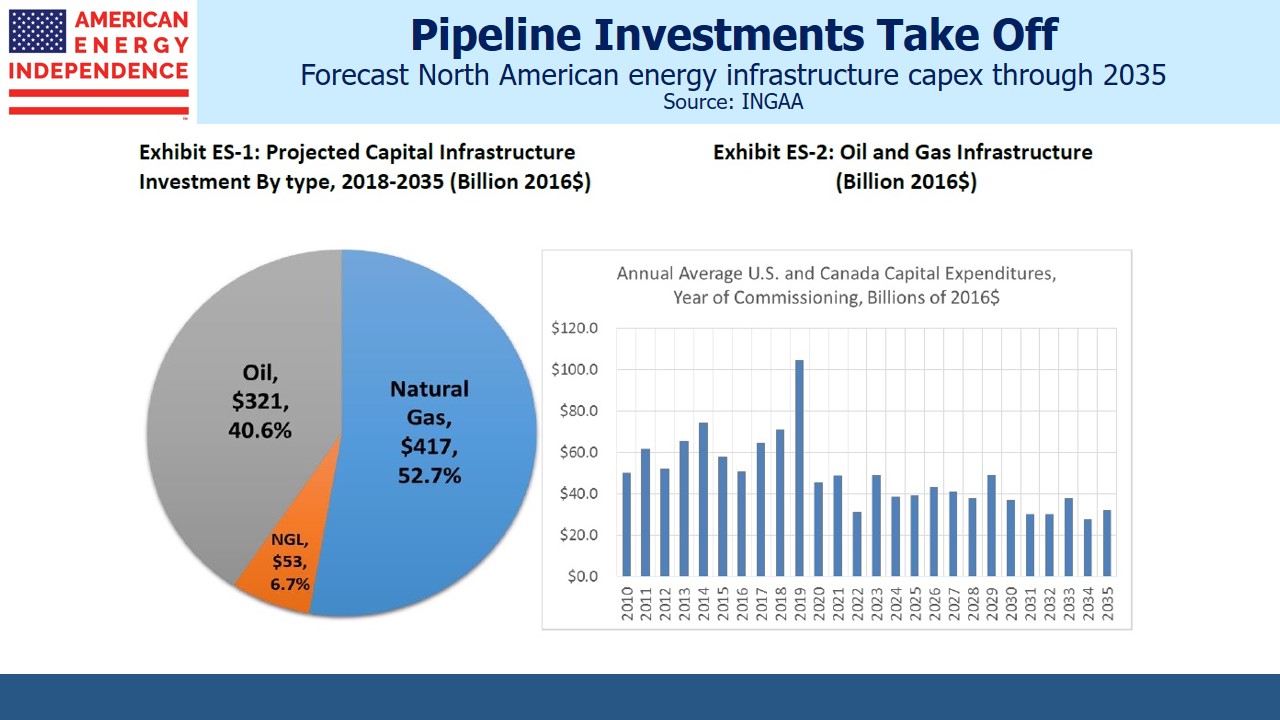 NGLs receive far less attention than crude oil or natural gas, but ethane and propane are key feedstocks for ethylene and polypropylene (different types of plastics) respectively. U.S. NGL production is expected to double by 2035, to 6.6 MMB/D, with exports also doubling to 2 MMB/D.

Although the U.S. is already energy independent, in that we produce more total energy on a BTU-equivalent basis than we consume, the popular measure relates to crude oil independence. Industry forecasts of the date when the U.S. reaches that milestone generally fall between 2025 and 2030. Because crude oil comes in hundreds of grades, we’ll continue to import the heavy crude favored by U.S. refineries even while net exports triple, from 0.5 MMB/d to 1.5 MMB/D. Another favorable development will be a halving of non-Canadian imports, further lessening our dependency on unstable regions and unfriendly governments. More than 100% of the growth in U.S. crude production is expected to come from the Permian, Niobrara and Bakken formations.

Given this outlook, it’s clear why many large MLPs have converted to corporations. They need a financial structure that will support growth plans. Investment bankers will find much in INGAA’s report to get them excited, since capex implies ongoing debt and equity issuance. For investors though, the new projects will need to generate a return above their cost of capital. That’s what will determine whether INGAA’s report is truly exciting.

Last week the corporate-heavy American Energy Independence Index added another 1% to its outperformance of the MLP-only Alerian MLP Index, reaching a 9% difference since the March FERC decision cast doubt on the MLP structure for certain companies. 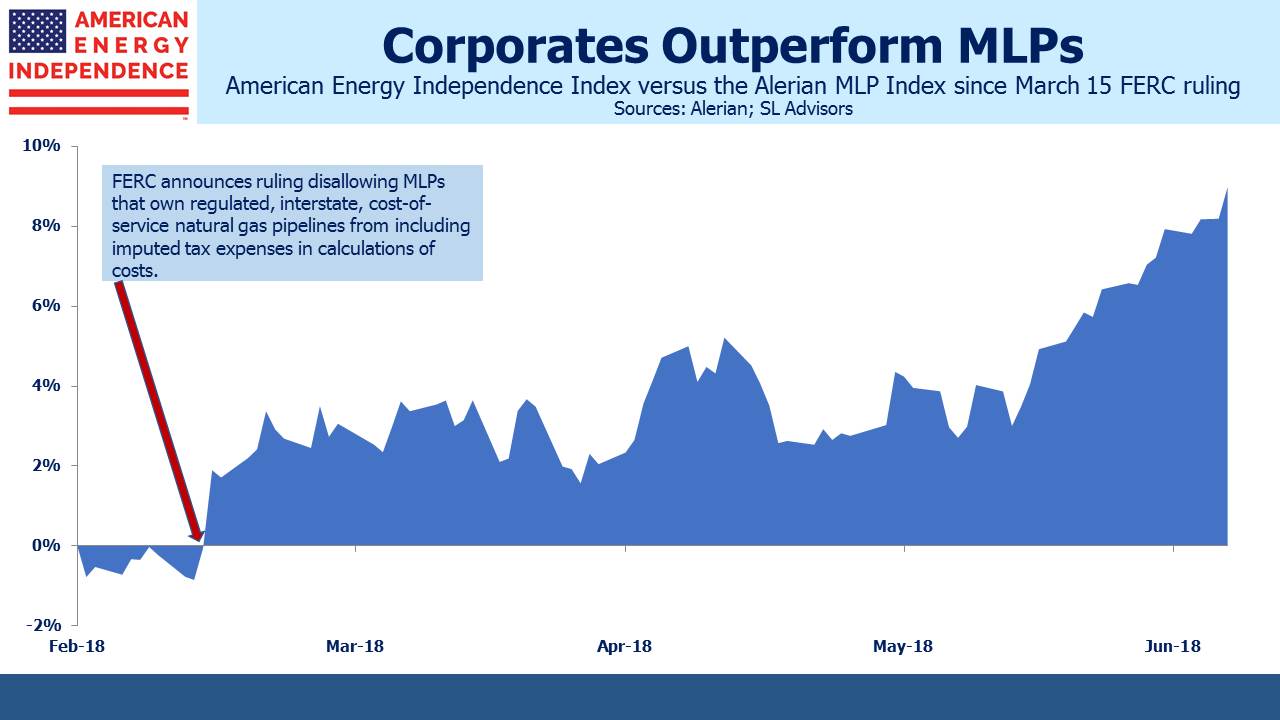