The world’s energy sector is undergoing a transformation. Widespread press coverage of the growth in renewables reflects increasing concern about climate change. Nextera Energy, the world’s biggest producer of wind and energy power, epitomizes the excitement about clean energy (see Is Nextera Running in Place?). A recent investor day highlighted falling costs and growing demand in the move away from fossil fuels.

But the numbers reveal that natural gas is the real revolution, with renewables having far less impact than press coverage suggests. 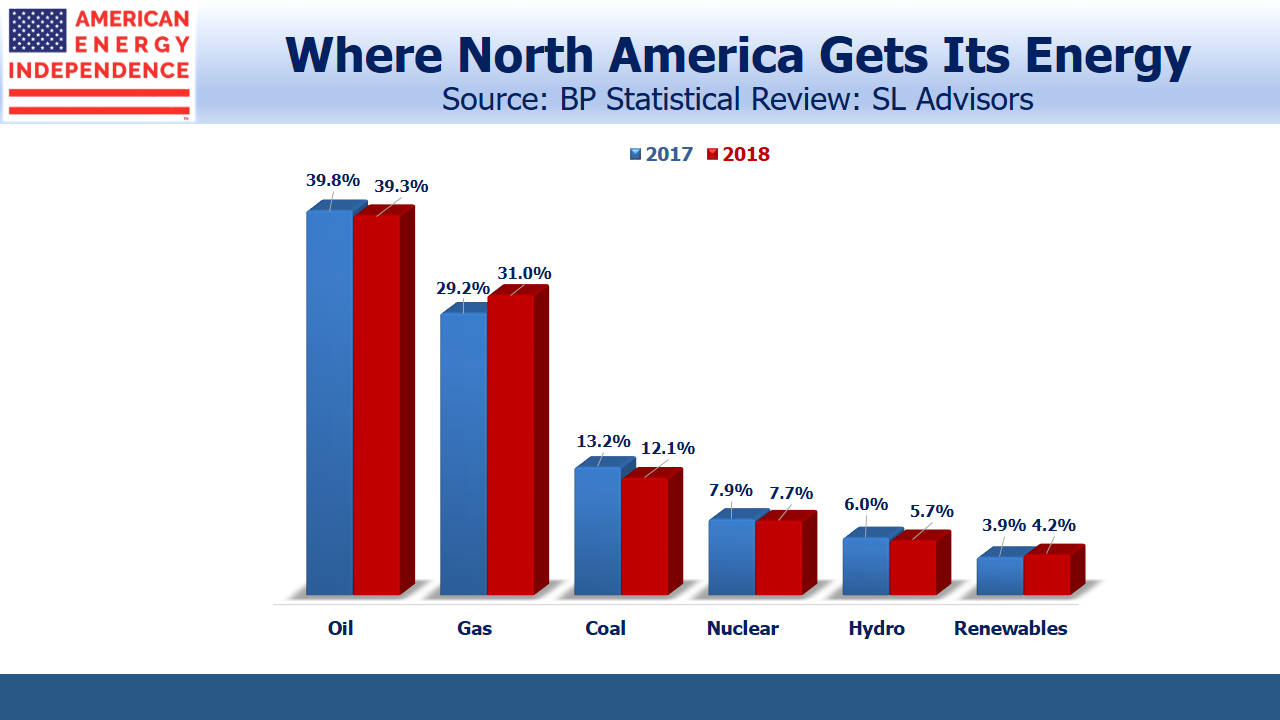 Last year, natural gas provided 43% of the growth in global energy use, versus 18% for renewables. In the U.S. renewables increased their market share from 3.9% to 4.2%, but natural consumption jumped 7X as much in absolute terms, taking market share from 29.2% to 31%. Oil, coal, nuclear and hydro power all suffered modest declines. 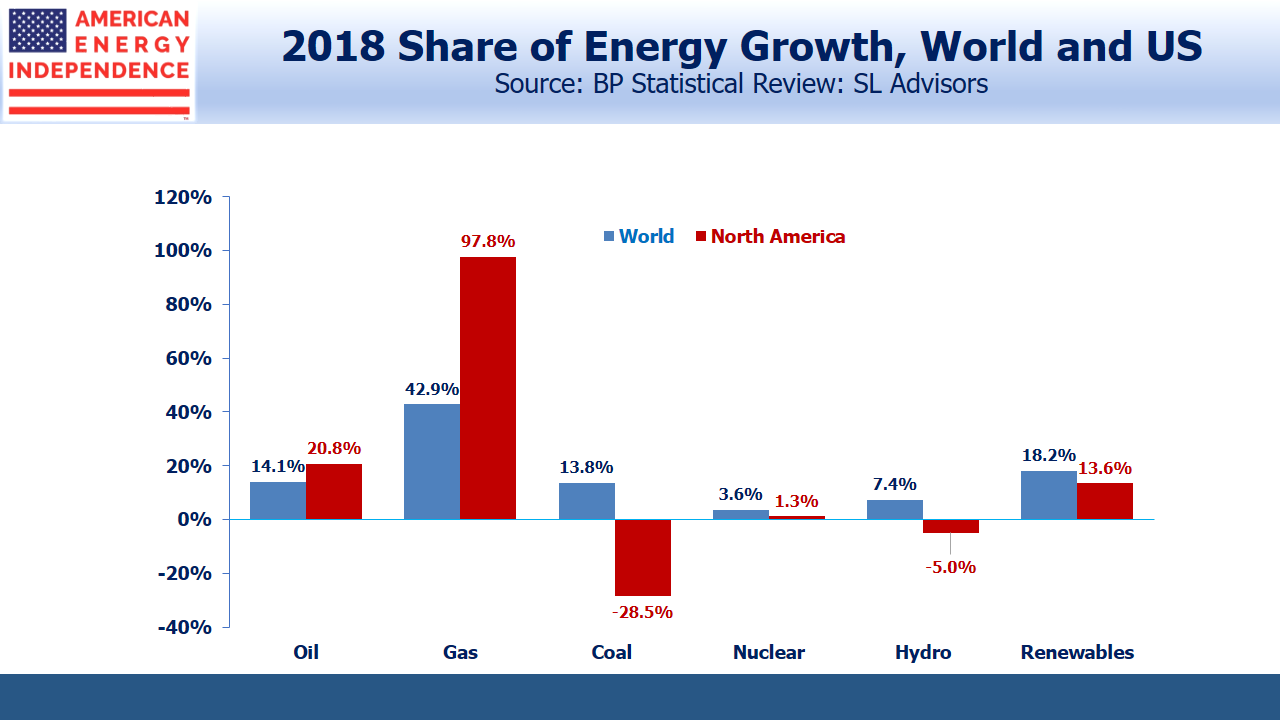 The U.S. figures relate to domestic consumption, but Chinese imports of Liquified Natural Gas (LNG) will provide further demand. China consumes more than half the world’s coal. Beijing’s smog is well-known, and domestic pollution has led the government to set ambitious goals for increased natural gas use. Chinese citizens are dying earlier and suffering respiratory illnesses because of coal pollution. The 13th Five Year Plan calls for natural gas to be 10% of China’s primary energy use by next year, and 15% by 2030. Last year natural gas was 7.5%. Although China can claim they are lowering their greenhouse gas emissions, they’re fighting domestic pollution not global climate change.

Since China’s energy use is growing, achieving their 2030 goal of 15% natural gas will require much more than simply doubling their existing consumption. Chinese energy demand is growing at 4.3% annually. At that rate, they’ll need 65% more energy than at present. Natural gas use will have to more than triple to reach their 15% goal by 2030.

China will need an additional 61 Billion Cubic feet per Day (BCF/D), approximately three quarters of current U.S. consumption. This is approximately the amount of new gas supply unleashed by the U.S. Shale Revolution. China’s current coal use is equivalent to around 200 BCF/D. There is enormous potential to substitute natural gas. 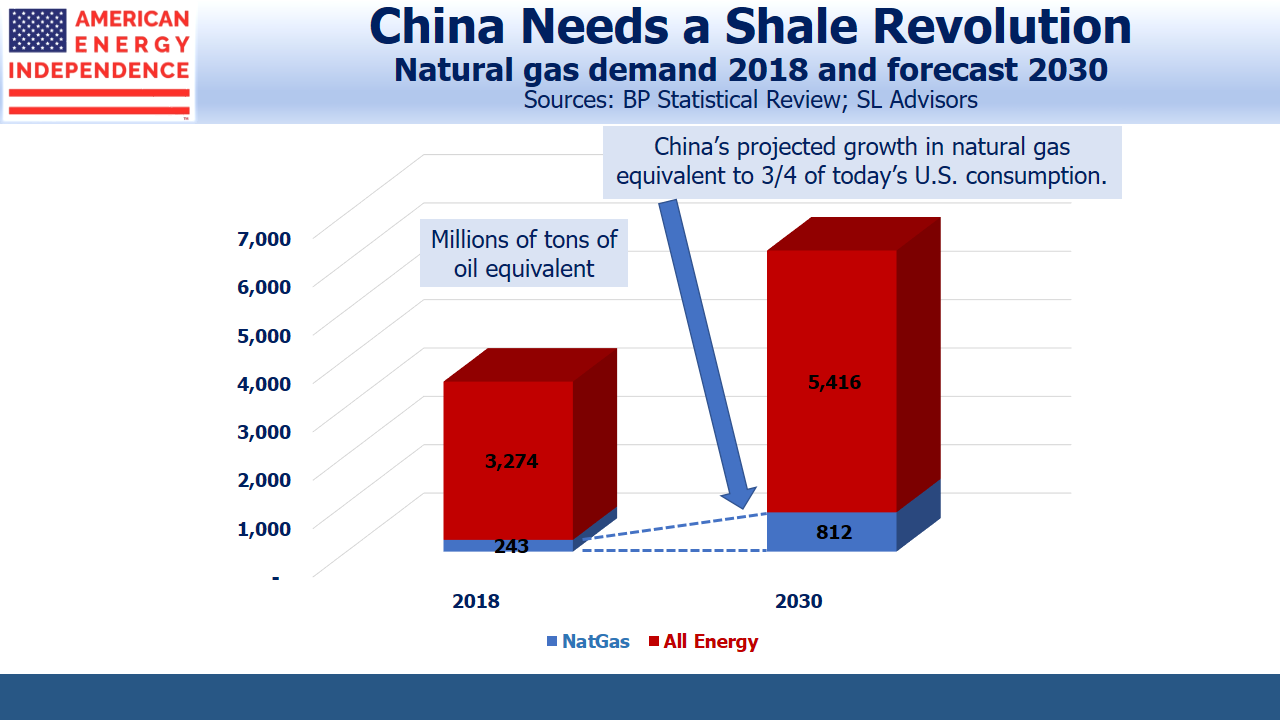 Russian gas from Eastern Siberia will be an important source of new supply, but China is also short of storage capacity. As in the U.S., demand peaks seasonally in summer and winter, but unlike the U.S. China has limited ability to build up reserves in the shoulder seasons. It’s also expected that the new Russian gas supply will have fairly inflexible volumes and won’t be able to vary production seasonally. These two factors are behind the expected jump in Chinese LNG imports over the next decade shown in the chart.

Even if Chinese LNG imports quadruple as in one forecast, China will fall far short of its goal to get just 15% of its energy from natural gas. If the Chinese are serious about combating pollution, they’ll want every feasible LNG export facility built. 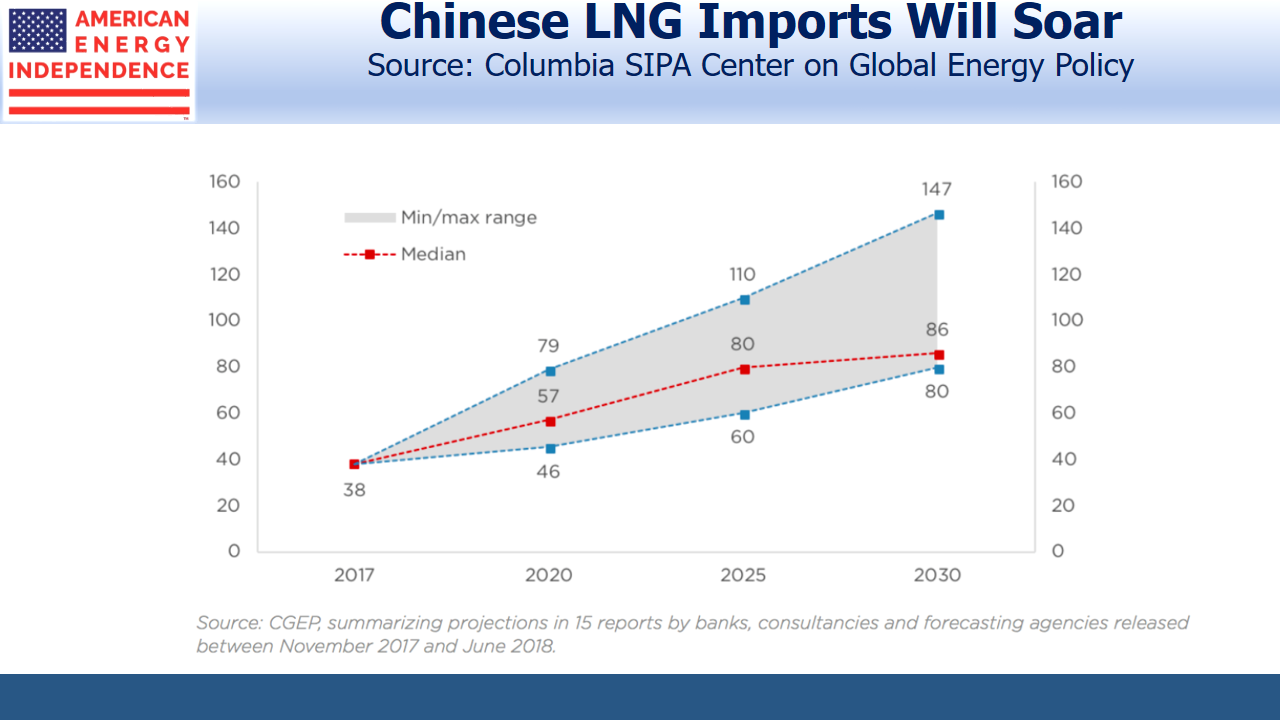 If President Trump ran an energy company, he’d blame the liberal media for reporting fake news about the growing dominance of renewables. Solar and wind are an interesting story, and there’s no shortage of reporters covering their growth. But the figures show that profound change in the world’s energy markets is being driven by natural gas. It doesn’t receive commensurate press coverage, but it’s the big story.