Investing in midstream energy infrastructure today means pipelines, storage, gathering and processing and all the physical networks that sit between oil and gas wells and their customers. It doesn’t have to be limited to servicing non-coal fossil fuels. We research and think about other sources of energy including nuclear, renewables and coal.  We prefer the more visible cashflows that come with handling and transporting energy over the cyclicality and capital intensity of production and generation. It’s why we have avoided upstream oil and gas, coal mining, and power generation companies.

Mining and burning coal releases many pollutants including nitrous oxide, sulfur dioxide, particulate matter and other pollutants. It is in long-term decline in North America.  Furthermore, transportation is by rail and ship, which have lower barriers to entry than pipelines.

However, renewables offer the opportunity for both long haul transmission lines and large scale storage. These are two areas with the potential for visible, persistent cashflows, although today there are few opportunities for scale and pure plays. Renewable generation is largely owned by utilities within portfolios that include coal, natural gas, and nuclear assets. 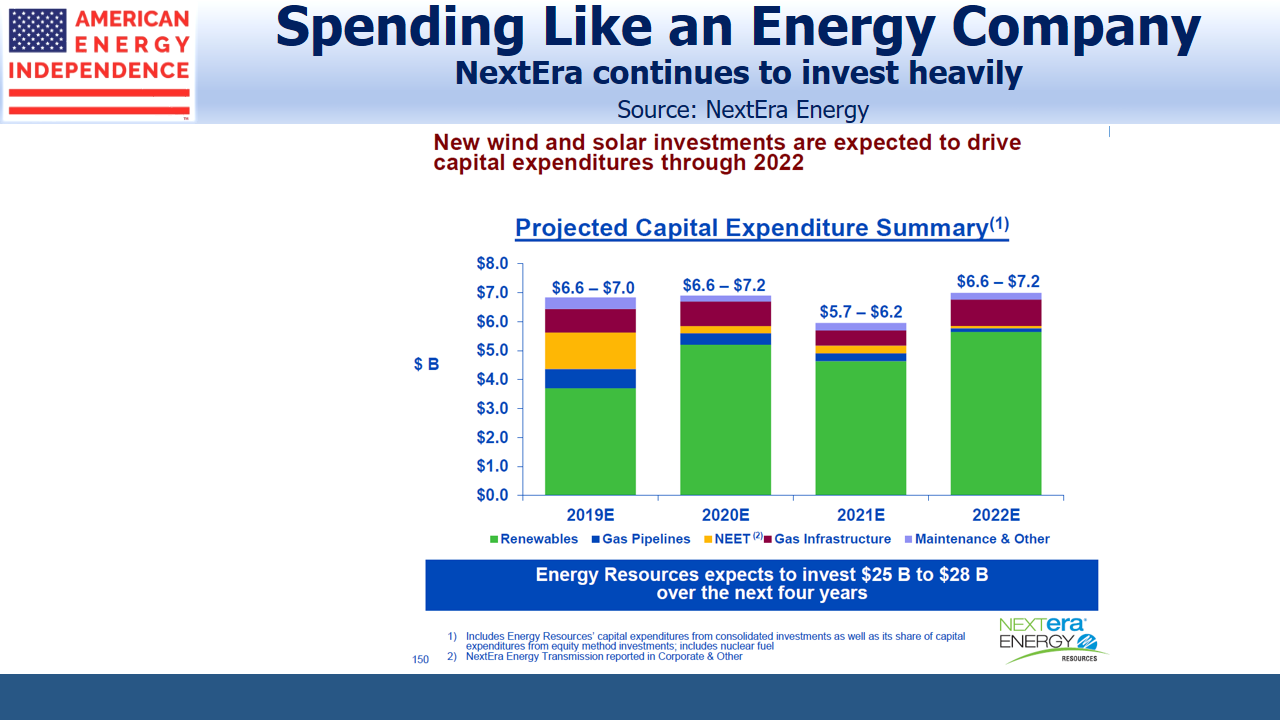 An exception is NextEra Energy (NEE), the world’s biggest producer of wind and solar energy. They’re the largest component of the SPDR Utilities ETF (XLU). On a list of countries ranked by wind power generation, they would be 8th. Just as the Shale Revolution has created ample opportunities to invest capital for growth, so has the burgeoning renewables business in the U.S., albeit with a wholly different response from investors.

Although energy investors have revolted against endless investments in more production and additional pipelines, NEE investors cheer the company’s stepped up commitment to renewables. Over the past year, their stock has returned 24%,  8% ahead of the S&P500 and 16% ahead of XLU. From 2015-18 NEE’s capex rose from $3.9BN to $6BN, a pace they expect to maintain over the next four years. They’re planning the world’s biggest battery center by a factor of 4X, in central Florida, to store intermittent renewable energy for later use when it’s not sunny or windy. 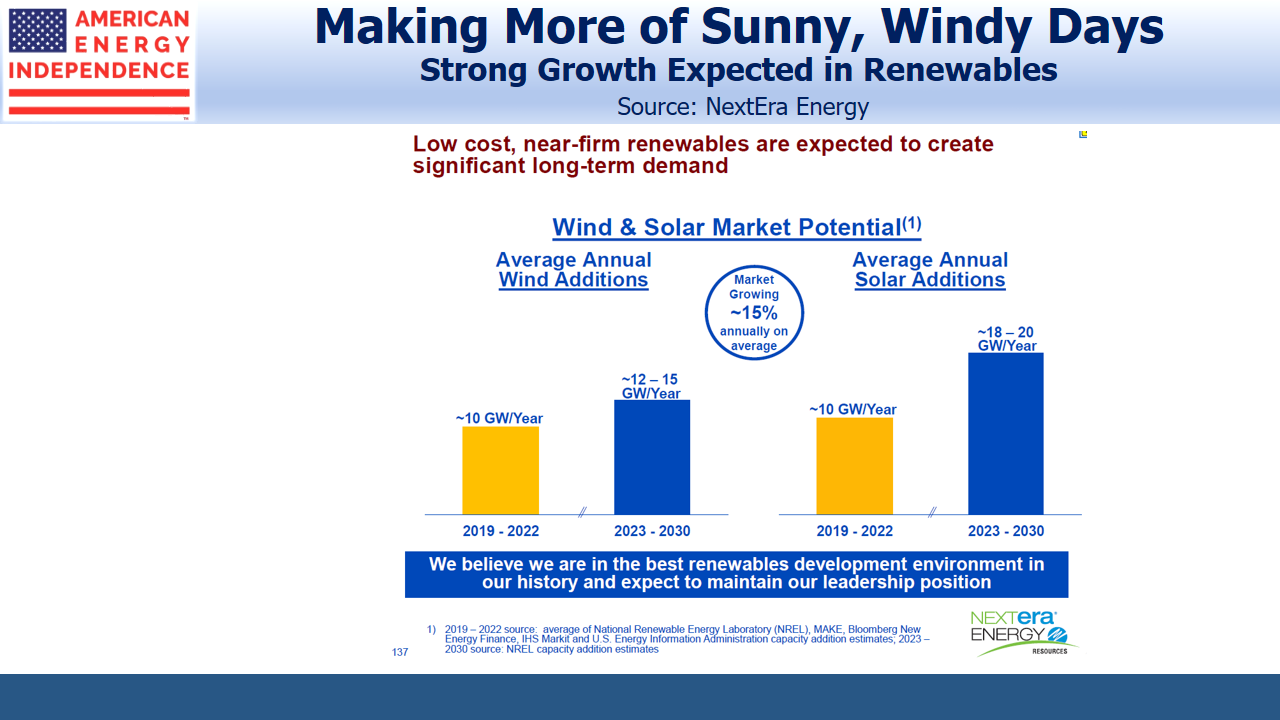 Much of this investment will be in new wind and solar generation, a sector NEE expects to enjoy 15% annual growth through 2030. This growth will be driven by declining prices for produced power. NEE expects improving technology to bring the cost per Megawatt Hour for wind and solar below all other sources.

CEO Jim Robo recently led an investor day during which his team enthused about the being a low-cost renewables company delivering the benefits of clean energy to customers and investors. 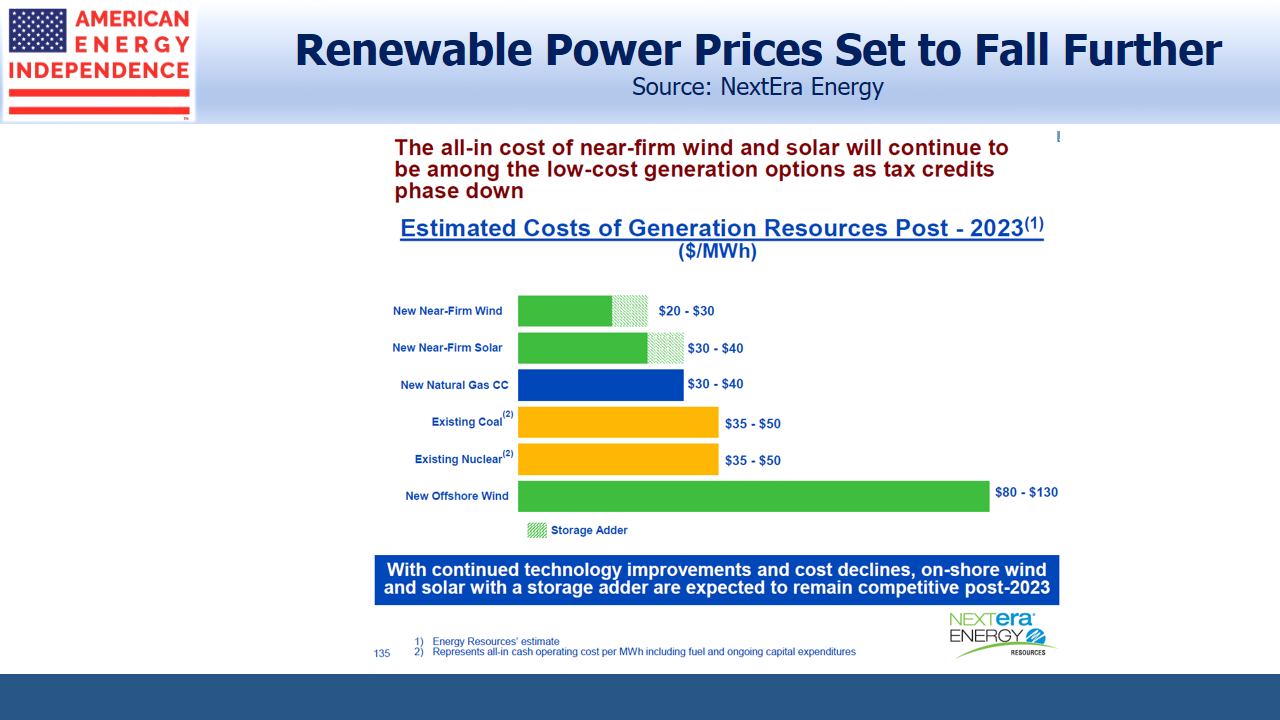 But here’s the catch. The company is plowing capital into assets that will depreciate, because continued efficiencies will lower the price of produced power. It’s analogous to holding a huge inventory of microchips when Moore’s Law dictates that the cost of computing power falls by 50% every 18 months; or of stocking millions of iphones, when the next version will drive down the price of the old ones.

Rapid advances in technology cause deflation in assets. While Intel and Apple have shown that it’s highly profitable to manufacture products with continuous improvement, NEE is on the other side of this trade.

It means that every windmill they install and every battery facility they build is worth less than it cost from the moment it begins operation. The falling cost of renewable energy, which is driving their pursuit of growth, threatens to erode the pricing power of the assets they’re developing.

Correctly assessing the cash flow generating capability of a new solar facility must be hard. NEE can depreciate their property, plant and equipment (PP&E) based on the physical useful life of what they’ve bought, but the impact on cashflows from future pricing pressure is less clear. As their installed asset base ages, they’ll become less competitive, unless they constantly reinvest to upgrade their depreciating equipment. They face a constant uphill struggle to maintain competitive, cost-effective assets.  Eventually, they’ll reach a cash flow cliff as their contracts roll off.

In 2018, NEE’s depreciation of its renewables-heavy PP&E jumped, and is now higher than peers Duke Energy (DUK) and Dominion Energy (D), the 2nd and 3rd largest components of XLU respectively. At $3.9BN, it was two thirds of their growth capex. In other words, two thirds of their capex is spent to preserve the value of their PP&E. Assuming straight line depreciation, NEE expects its existing asset base to have a useful life of just over 18 years, which contrasts with the 35X earnings multiple assigned its stock by the market. Free Cash Flow has been declining as a percentage of net income, and will shift negative this year. 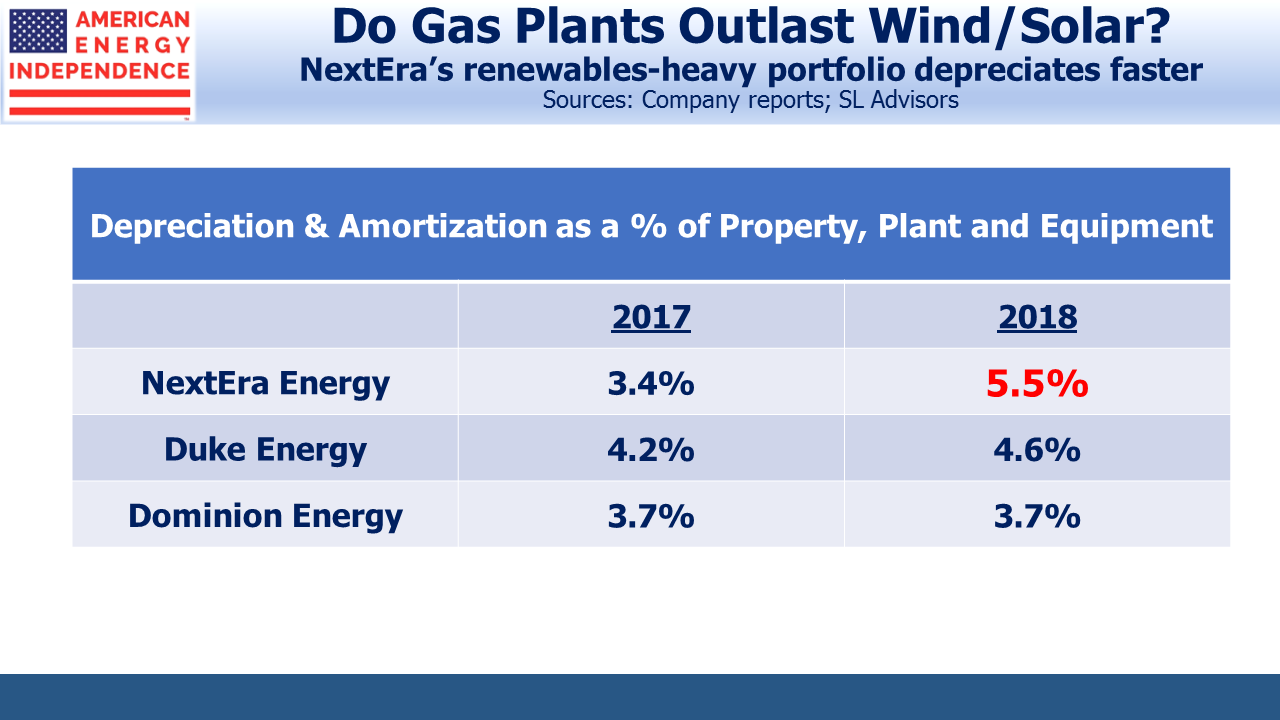 NEE is a company that’s investing heavily in the future, but will always be racing against advances in renewable technology. A purchase delayed will provide cheaper power, later. Advances in renewables may one day cause an impairment charge on old assets struggling to compete. A 10% write-down in PP&E would wipe out a year’s profits.

The irony is that pipelines regularly raise prices, and the sector has been punished by investors for spending on new infrastructure to transport growing oil and gas output. Disruptive pipeline startups are rare, because expanding an existing pipeline brings network effects and is cheaper than building new. Moreover, FERC’s regulatory framework  recognizes the oligopolistic role pipelines play and is designed to limit egregious pricing.

By contrast, NEE is being rewarded for investing heavily in assets whose pricing power diminishes. It’s true their customers are locked in via long term power purchase agreements. One of these is being challenged by bankrupt PG&E in California, although NEE is confident it will be upheld. But they still face the risk of lower-priced competition in the future, and no-one knows if regulators will allow them to charge customers rates above what new power assets would dictate indefinitely. Their potential competitors include new entrants unburdened by legacy, inefficient infrastructure. Even their customers can turn into energy providers by adding rooftop solar panels. The technology around renewables and battery storage continues to improve, creating the possibility of further disruption by new entrants.

We don’t own NEE. By all accounts they are a well-run company. Their progress will provide a useful guide to the growth of renewables in the U.S. and their ultimate profitability.