Last week Antero Midstream (AM) became the latest MLP to simplify their structure. This is further evidence of the declining opportunity set for MLP-dedicated funds, and cause for investors to seek exposure to energy infrastructure that goes beyond MLPs to include corporations (see The Uncertain Future of MLP-Dedicated Funds).

Like many MLPs before them, Antero is becoming a corporation. Broader institutional ownership and enhanced trading liquidity were cited as the reasons.

The benefits of being an MLP persist – our friend and regular commenter Elliot Miller would note that the tax benefits remain significant: MLPs don’t pay Federal corporate income tax, leaving more money available for distributions. And those distributions are largely tax deferred, with the possibility of being tax-free to one’s heirs given thoughtful estate planning.

Nonetheless, Antero concluded that the MLP structure no longer suited them. They joined a long list of companies who’ve reached the same conclusion, including Kinder Morgan (KMI), Targa Resources (TRGP), Semgroup (SEMG), Oneok (OKE), Archrock (AROC), Williams (WMB), Dominion (D) and Enbridge (ENB). Tallgrass (TGE) has retained the partnership structure for governance but chosen to be taxed as a corporation, and Plains All American offers a option for both 1099 (PAGP) and K-1 tolerant (PAA) investors.

They’ve all found that MLP investors are too few and fickle to be a reliable source of equity capital. Tax impediments add cost and complexity to tax-exempt and non-U.S. institutions, a substantial portion of the investor base for U.S. public equities. The K-1s are how investors achieve the tax benefits noted above, but their complexity dissuades most retail investors. Once you eliminate these different classes of investor, almost the only buyers left are taxable, high net worth individuals. In other words, older, wealthy Americans.

These investors like their income, and the several dozen distribution cuts imposed in recent years have done irreparable harm. The high payout ratios of MLPs left little cash for funding growth projects (see It’s the Distributions, Stupid!). This wasn’t a problem until the Shale Revolution created the need for investments in new infrastructure, to support the huge increases in U.S. oil and gas output. Cash was duly diverted from payouts to growth projects, leading to a 30% drop in distributions (see Will MLP Distribution Cuts Pay Off?).

EBITDA improved and leverage came down, but MLP investors only care about distributions, which were cut by 30%. Consequently, the sector fell hard and is still 30% below its 2014 peak. 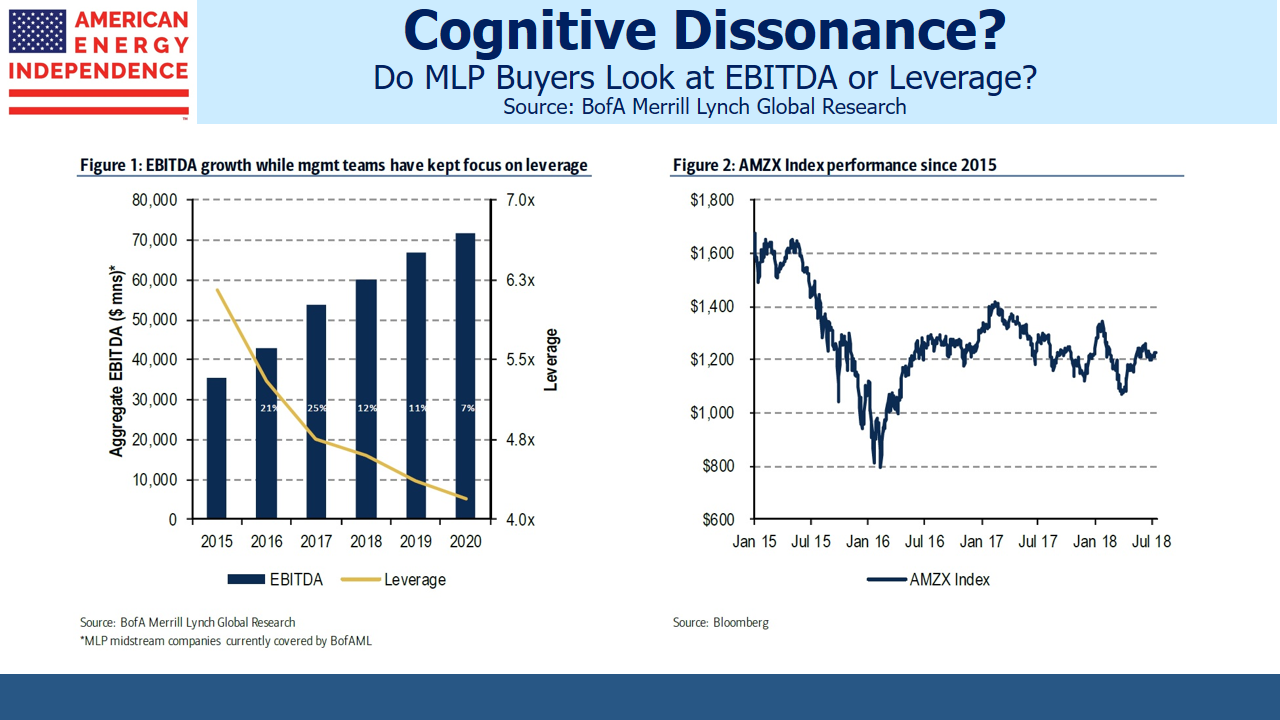 MLP-dedicated funds are left with fewer, smaller fish to catch. Their promoters still defend them, in spite of their flawed structure rendering them taxable with correspondingly eye-watering expenses (see MLP Funds Made for Uncle Sam). As pipeline companies continue to abandon the MLP structure, it’s showing up in the sinking market cap of the MLP indices. The market cap of both the Alerian MLP Index (AMZ) and the Alerian MLP Infrastructure Index (AMZI) are decreasing even while the sector is up this year. 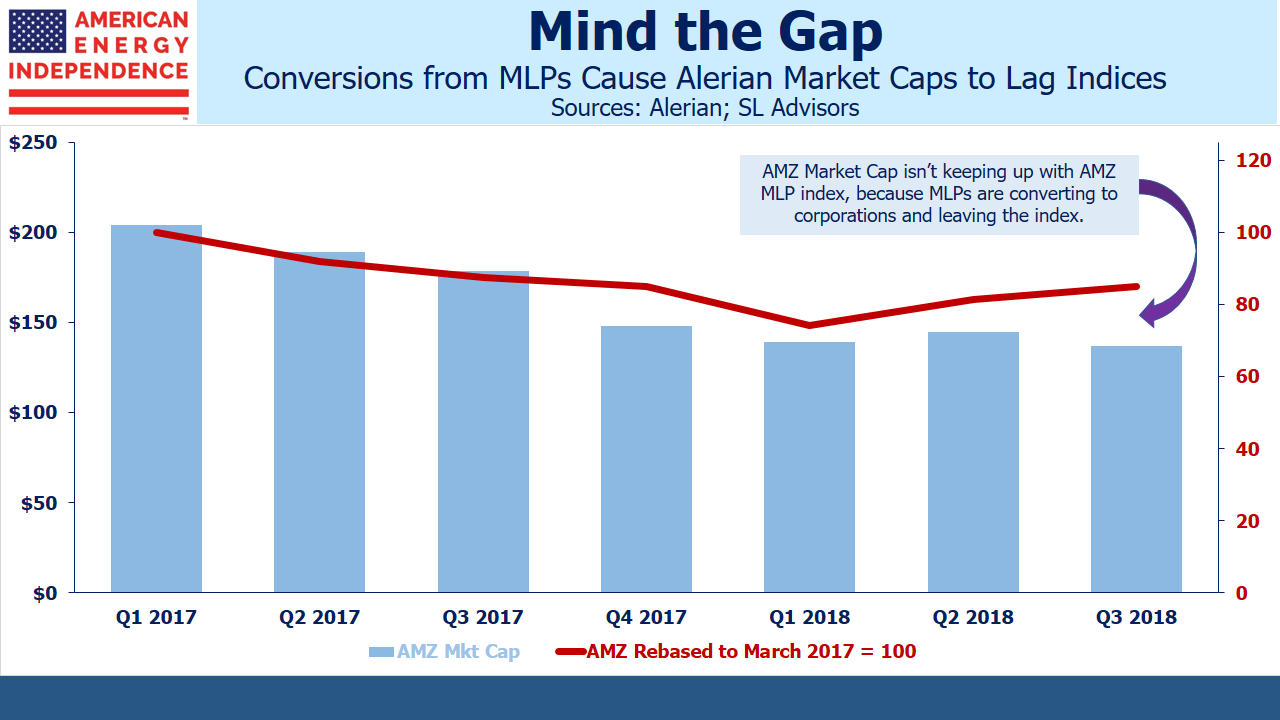 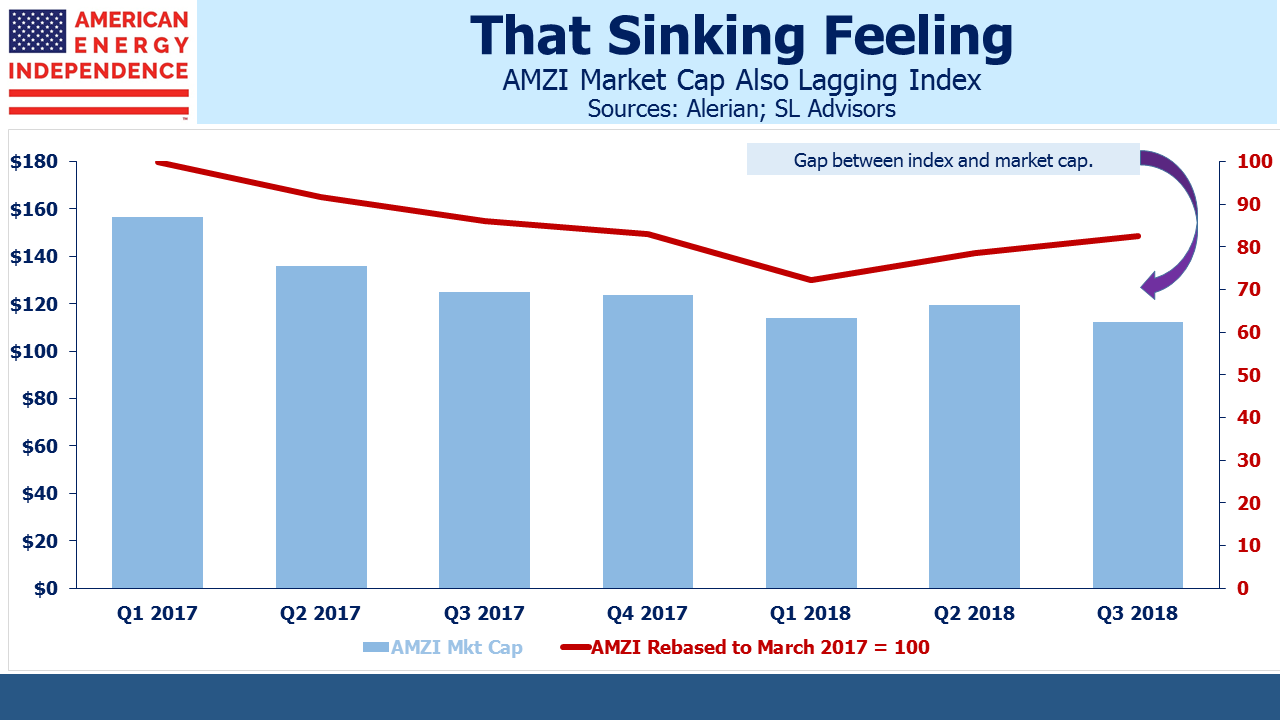 These MLP-dedicated funds can’t easily change their structure to avoid taxes by becoming RIC-compliant – they’d have to sell 75% of their MLPs, which is prohibitively disruptive. Some smaller funds whose MLP sales weren’t market moving have done so, which shows that others would if they could. Instead, MLP fund proponents are left to argue that their fund structure is optimal, even though no new MLP-dedicated funds are being launched any more.

Some big MLPs are happy enough. Enterprise Products (EPD), Magellan Midstream (MMP) and Energy Transfer (ETE) are all sticking with the structure. It works best if you don’t need external financing. We are invested in all three companies through our funds and separately managed account strategies.

MLPs can still be good. An MLP-only approach is not. MLP-dedicated funds are the worst place to be, given the shrinking MLP market cap and tax burden. But broad energy infrastructure, growing as we pursue American Energy Independence, is cheap.