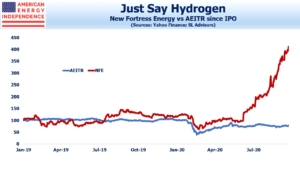 NFE was founded in 2014 by Wes Edens, already a billionaire as a co-founder of Fortress Investment Group (FIG). They transport Liquified Natural Gas (LNG), and have five facilities located around the Caribbean and in Miami. NFE claims that their innovative use of smaller LNG ships makes clean natural gas available to ports that otherwise don’t have the infrastructure. These vessels are called Floating Storage Regasification Units.  NFE’s investor slides emphasize their ability to bring cleaner-burning natural gas to island nations such as Jamaica, thereby reducing their reliance on dirtier, oil-based fuels for power generation.

NFE went public last year as an LLC electing to be taxed as a corporation, and earlier this year converted to a regular c-corp. Their stock performance was unremarkable – that is, it tracked AEITR – until early July when it took off.

Although NFE already had a positive environmental story to tell, in recent months they have begun discussing plans to transport hydrogen, an emission-free fuel. So far, management has done little beyond muse on conference calls about their interest in hydrogen and how great it would be if the economics allowed it to compete with natural gas. There are no hydrogen-related revenues, and analysts don’t expect the company to make substantial capital commitments in this area.

Nonetheless, there’s little else to justify NFE’s recent meteoric rise beyond its stated interest in hydrogen. The word came up 32 times in the 2Q earnings call on August 3rd (up from 12 in the 1Q call), although obliging questions from sell-side analysts helped. CEO Edens noted that, “75% of all of the elements in the universe are hydrogen, 24% helium, 1% other. So the world is full of hydrogen.”

This doesn’t mean NFE won’t access new technology that makes hydrogen a commercially viable fuel. Pipelines and other infrastructure dedicated to natural gas might be repurposed to handle this zero-emissions fuel, which would transform the malaise felt by investors towards the sector. But NFE’s stock has shot up recently mostly on the hope of a breakthrough. NFE’s green hydrogen division (named Zero) has no revenues. But just having a business unit with that name can only help an energy company.

Thursday’s presidential debate touched on climate change. Regardless of who you’re voting for, there can’t be much doubt that Trump won the exchange. Biden’s talk of a moral imperative to reduce carbon emissions isn’t likely to resonate when the economy is virus-ravaged. Trump correctly noted that China and India plan to keep increasing their CO2 emissions for at least another decade. China burns half the world’s coal.

This component of climate change realpolitik receives little popular attention.  Climate change policies aren’t currently costing much, unless you live in California where electricity is greener, more costly and less reliable. But if America does adopt policies to aggressively reduce emissions, Trump’s point is that many will balk at higher domestic energy prices when the biggest emitters remain focused on raising living standards. A Biden victory will lead to a more vigorous debate, exposing a huge flaw in the Paris agreement.