The International Energy Agency (IEA) expects CO2 emissions to fall 8% this year. This is six times the reduction that followed the 2008 financial crisis, reflecting the far greater drop in economic activity. Transportation has plummeted — peak congestion on roads in March was estimated down 50-60% in major cities around the world including Los Angeles, Sao Paolo and Mumbai. The IEA estimates that aviation fuel demand was down 27% in March. This likely understates the actual fall. TSA figures show passenger traffic through security checkpoints down over 95% in March and April.

Even the most die-hard climate extremist can hardly cheer this news, given the circumstances. But the size of the drop will take emissions back almost a decade. If the world had only twelve years left before climate change catastrophe, as Alexandra Ocasio-Cortez (AOC) asserted last year, we can now make it to 2040. 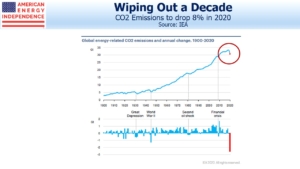 Energy demand from the transportation sector may never fully recover. Working from home has been less disruptive than imagined. On earnings calls with pipeline companies, whenever the topic came up CEOs noted that working remotely was fine. Facebook is just one company whose workforce will largely be remote for the rest of the year. Less commuting, less business travel and vacations closer to home could become permanent. Declining use of public transport for fear of infection may partially offset this, but overall the pandemic’s impact on energy demand will most likely be a long-lasting reduction.

Coal demand has also been hit hard. China burns half the world’s coal, and it produces around 70% of their electricity. Nothing meaningful can happen on climate change without China (listen to our podcast: China Keeps Warming the Planet).  The lockdown lowered Chinese power demand, shrinking coal consumption. In the U.S., coal-fired power demand in 1Q was down by a third compared with a year ago (a mild winter, cheap natural gas and greater use of renewables helped). 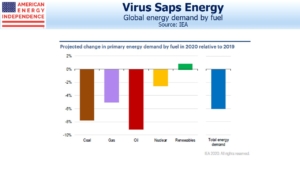 Climate extremists will continue to press their case, but they’re unlikely to gain new adherents in the next few years. Falling emissions and the urgency of repairing the huge economic damage we’re enduring will drive public policy. As we count the human cost of the lockdown in terms of neglected health, business failures and emotional trauma, returning to the economy we had will be a priority.

We need to be better prepared for the next pandemic. The World Health Organization (WHO) called climate change the biggest global health threat of the 21st century. They warn of 250,000 additional deaths annually from climate sensitive diseases starting in 2030 (like AOC, they believe we have around a decade left). Coronavirus deaths will be multiples of this figure when the numbers are finally added up.

The WHO’s website on climate change adds that, “The direct damage costs to health is estimated to be between USD 2-4 billion per year by 2030.” This number is derisively insignificant compared to the trillions we’re spending in America in financial support alone. Similar fiscal support along with economic losses are occurring globally.

The WHO pursued politically correct groupthink (listen to our podcast: Climate Change Was Never Our Biggest Threat). They were trying to be woke. It’s time they woke up.

This reordering of priorities is bullish for the energy sector. Jim Cramer often points out that young money managers won’t invest in fossil fuels because of climate change. Many will retain that bias, but that’s now yesterday’s trade. At the margin, rebuilding our economy and the current sharp drop in emissions will trump global warming. High school dropout Greta can resume her education — remotely. The world’s focus has shifted.