The energy sector has been leading the market’s rebound from the lows of March. Demand for crude oil plummeted, and the Saudi decision to simultaneously increase supply caused prices to briefly go negative. No investment sector in energy was safe, including midstream infrastructure.

U.S. oil production has already dropped by 1.6 Million Barrels per Day (MMB/D), from 13.1 MMB/D in mid-March to 11.5 MMB/D now. First quarter earnings calls updated investors on the collapse in demand. Magellan Midstream reported gasoline demand was down 24% in April (see More Solid Pipeline Results). Jet fuel was down by 75%.

However, there’s more to the U.S. energy business than crude oil. Natural gas demand has remained solid, helped by continued substitution away from coal. And propane exports have risen – as India’s refineries are producing less gasoline, they’ve also cut propane production which is often part of the same process. So we are exporting more propane to India, where it’s widely used for cooking.

The continued rise in the American Energy Independence Index (AEITR), which includes all the biggest pipeline companies in North America, reflects increasing optimism that economic activity is returning. The charts below show interesting data from Apple that estimate how much people are traveling based on their requests for directions from Apple Maps. 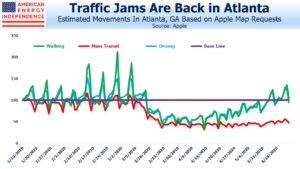 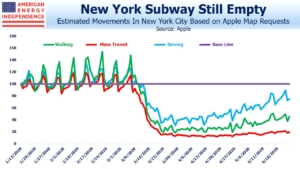 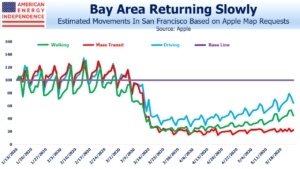 People are walking and driving more, although Atlanta is closer to normal than New York. What’s also interesting is that mass transit use isn’t recovering as quickly. Almost 21 thousand people have died in New York City, about a fifth of the U.S. total. There are many reasons for this concentration, but extensive use of mass transit is likely one of them. The public has clearly reached that conclusion. Although many expect working from home to reduce energy consumption for commuting, if large numbers of people avoid mass transit it’ll boost gasoline consumption, to the extent that it results in more road trips.

All 50 states are relaxing constraints. I for one have been amazed – shocked, in fact – at how easily state governors can restrict our freedom for an extended period of time with seemingly little legislative oversight. The gradual recovery in travel is a welcome sign that we’re emerging onto the other side of the pandemic. 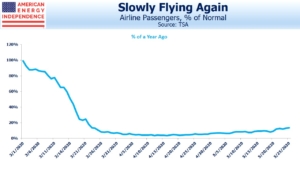 Airline activity is starting to pick up as well – in recent days the TSA reports air passenger traffic reached 15% of normal, doubling from early May. Signs are that America is gradually emerging from its lockdown. The consequent increase in energy use is drawing investors to the sector.

We are invested in Magellan Midstream, and all the components of the AEITR.

Falling Emissions Are Good For Energy Why Are MLP Payouts So Confusing?
Scroll to top