On Wednesday Exxon Mobil (XOM) declared a quarterly dividend of 82 cents a share. Although this means 2020 will be the first year since 1982 that they haven’t raised it, the bigger question is whether they can sustain it. 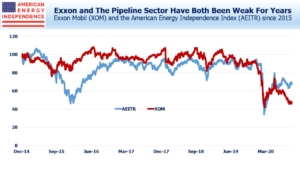 We noted recently how energy investors could fare better under a Democrat administration (see Why Exxon Mobil Investors Might Like Biden). A White House looking for ways to combat climate change should cause energy executives to hunker down, constraining their desire to drill for oil and build new infrastructure. A pipeline owner should find this a welcome prospect, as less cash spent on new projects means more for buybacks, debt reduction and dividend hikes. XOM is positioning itself for such a scenario – they plan to increase oil and gas production from 4 million Barrels of Oil Equivalent per Day (MMBOED) currently to over 5 MMBOED by 2025. This bet is predicated on rising global demand driven by emerging economies combined with falling investment in new supply, as energy companies prepare for peak oil and the energy transition. 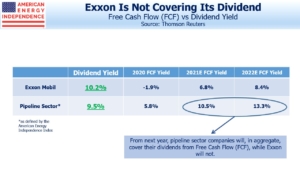 There’s something appealingly pragmatic about XOM’s positioning. Although growth in renewables gets all the attention, the world still relies on fossil fuels for more than 80% of its energy. In the U.S., the biggest increase in power generation in the first half of the year came from natural gas, not renewables. Most credible long-term energy forecasts show that the world will be using more of every type of energy, because developing countries want to raise living standards. The energy outlook embedded in XOM’s production plans is probably not consistent with the Paris Climate Accord. If you want to bet that the world will manage to live with a warmer climate, rather than achieve the reductions laid out by the UN’s Intergovernmental Panel on Climate Change, XOM might be a way to express that view.

If they’re wrong, that 82 cent dividend won’t last. Analysts estimate they need crude prices of at least $55 per barrel in order to generate enough cash to cover planned growth capex and pay their dividend. For now, they’re funding it with increased debt.

Pipeline investors often must consider the viability of a company’s payout policy. The Alerian MLP ETF, AMLP, has cut by 50% since 2014. Although Energy Transfer (ET) just did the same early last week, the pipeline sector is entering a period of sharply rising Free Cash Flow (FCF). The trend towards reduced spending on new projects was well underway before Covid hit this year.

Energy has been chronically out of favor, so XOM and the American Energy Independence Index have tracked one another lower. Although the pipeline sector and XOM are both forecast to experience growing FCF, pipeline dividends will be comfortably covered by FCF while XOM’s will not, at least with current crude oil pricing. XOM offers a way to bet on higher crude. By contrast, pipeline stocks look cheap regardless.

Next Wednesday, November 4th at 1pm EST we’ll be hosting a post-election webinar to discuss the outlook for the energy sector. Click here to sign up.