Energy investors would still like to see less spending on growth projects than company executives are pursuing. Whenever a CEO announces new spending, there’s a palpable lack of enthusiasm. Given valuations, many companies could easily justify buying back stock as a higher return use of capital than building new infrastructure. The message is getting through, but not quickly enough in the opinion of many.

Part of the problem is the way companies present their growth plans. A recent investor presentation from Enlink (ENLC) illustrates the problem. Their 2020 Growth Capital Expenditures (“capex”) are listed as $275-375MM. The collapse in ENLC’s stock price this year has driven their dividend yield up to 25%, a lofty level they plan to maintain. Since stock repurchased would therefore generate a 25% return as they claim DCF coverage >1X, it’s hard to believe they carried out a rigorous analysis on where they plan to invest cash that clearly won’t be used to buy back stock. Theoretically, their capex plans will yield a higher return that their stock, the implausibility of which casts further doubt on their capital allocation. 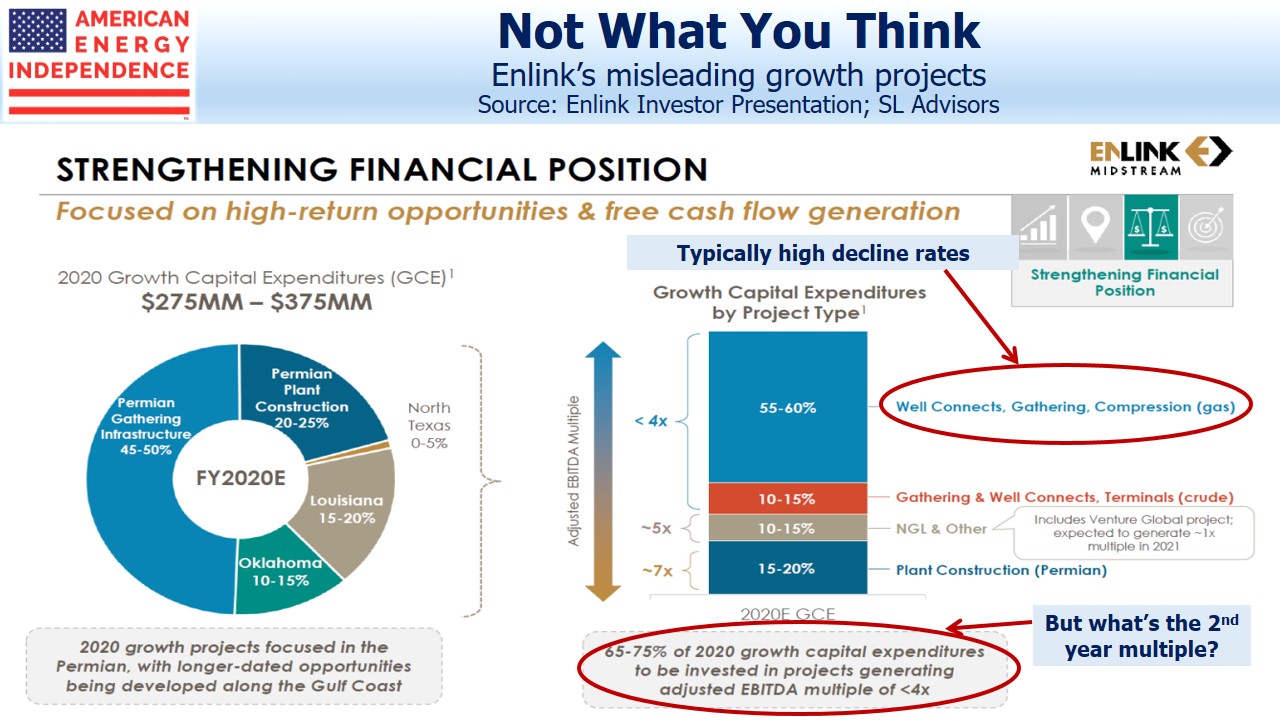 By coincidence, ENLC’s projects offer a return similar to their dividend yield, perhaps justifying them as a better use of scarce funds rather than buybacks. But over half the projects are for natural gas well connects, gathering and compression. These are not long distance transportation pipelines, but narrow lines running to individual wells. Their volumes will begin strongly and deplete as output from the wells they’re servicing depletes.

The point is that projects should be evaluated on an NPV basis, taking account of all the future cashflows. An EBITDA multiple is a shorthand way of comparing projects, and only makes sense when that EBITDA is stable or growing. ENLC’s CFO presumably doesn’t assess projects that way.

The types of project ENLC is planning have declining EBITDA. Including them in their presentation the way ENLC does creates a misleading impression of highly attractive investments. When we asked ENLC about the absence of any decline assumption in their own capex guidance, they referred us to Devon Energy’s (DVN) comments on the issue. DVN is the big customer whose production ENLC’s capex are intended to service. DVN has forecast production declines rates from “high 20% to high 30%”. DVN isn’t claiming that production will be stable. So why is ENLC using the first year’s cash flow to justify the capex in its presentation?

ENLC must know that presenting an investment based on the first year’s cashflow doesn’t fairly present the longer term outlook. They should either model the EBITDA over several years to show the decline rate they expect, or present the NPV analysis that they’ve presumably done internally before committing capital. A cynic might believe ENLC is doing projects with a negative NPV because the first year’s EBITDA flatters their leverage ratio, temporarily boosting EBITDA and thereby lowering Debt:EBITDA.

Energy companies are being criticized for poor capital allocation – a more transparent and rigorous explanation of spending would help ease investor concerns.

ENLC has plenty of room for improvement in this area. We hope they do. We are invested in ENLC and believe it’s cheap. The market is not giving energy management teams the benefit of the doubt and their stock would benefit from our suggested improvements in their presentation.