With the resurgence in U.S. crude oil production over the last year, it was only a matter of time until shale output reached a new record. Based on recent actual production and the EIA’s forecast for a June increase of 122 MB/D (thousand barrels a day), the peak of March 2015 is only 57 MB/D away. 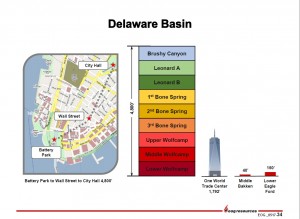 The Permian Basin in West Texas has been the principal driver of this increase in production. The depth of the play, as illustrated in the slide from a recent presentation by EOG (displayed above), holds substantial reserves and has benefited from extraordinary improvements in efficiency by the operators there which has brought down break-even levels. Many have underestimated the ability of the U.S. private sector to harness technology as effectively as they have. This is activity that OPEC expected to choke off through a ruinously low price of oil. Instead, they were forced to switch gears last November and concede steadily increasing market share to U.S. producers. Recently, OPEC quietly raised their 2018 forecast of total U.S. oil production (shale and conventional) to 10 MMB/D (million barrels a day). Given the capital being invested by drillers it’s plausible that by 2018 the U.S. could be the world’s biggest crude oil producer. 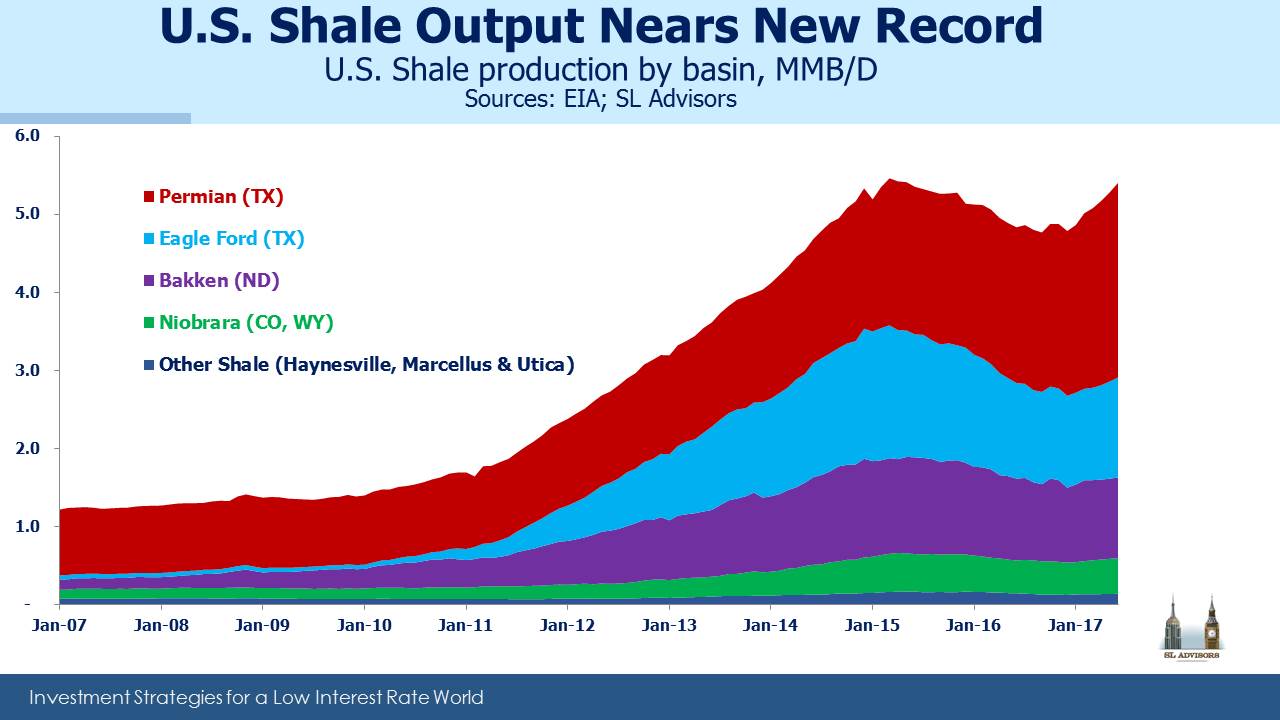 The most visible recent pipeline protest was against Energy Transfer’s (ET) Dakota Access Pipeline (DAPL) earlier this year. One of President Trump’s first actions was to correctly overturn an Obama-era executive order blocking its completion. But public demonstrations against fossil fuels continue elsewhere, even if their mentally agile adherents comfortably drive to join their friends in shouting against oil and natural gas.

As a consequence, managements of energy companies are recognizing that they need a strategy to deal with such protests, since a delayed pipeline can quickly become costly. At their Investor Day earlier this month, Williams Companies (WMB) CEO Alan Armstrong discussed their evolving attitude towards groups that seek to frustrate the implementation of infrastructure projects. Striving to learn from ET’s experience with DAPL, Armstrong described a policy of actively engaging with opponents to find common ground. He also noted the potential of other groups, such as construction unions keen for the jobs, to line with WMB in pushing projects forward.

Expect to see more savvy use of media by energy companies, including video of American workers making America Great accompanied by fast-paced, inspiring music. The WMB Analyst Day included a couple of short clips. Here’s another on WMB’s blog page (called “Pipe Up”), extolling the benefits of their Northeast Supply Enhancement project.

The education of investors about tax-inefficient MLP funds received a welcome boost from Barron’s. A letter from Mike Flaherty noted the tax drag on many poorly structured MLP funds included in a recent article, “Best ETFs for Income“. Flaherty correctly pointed out the value-destroying corporate tax liability incurred by AMLP and AMZA amongst others. Asked to respond, one PM blandly referred investors to seek tax advice, which is what you’d say if you ran a poorly designed fund and wished to change the subject. Barron’s hasn’t yet assigned a journalist to write on this topic, in spite of our suggestion that they’d be performing a useful service to countless MLP fund investors. But perhaps they will soon.

We are invested in Energy Transfer Equity (ETE) and WMB