It’ll be no surprise to MLP investors that the correlation of our asset class with crude oil has been rising. Falling crude in 2015 led MLPs to drop 58.2% from high to low, a figure we won’t soon forget. That same institutional memory among investors is imposing a similar relationship today. Last time, lower oil led to lower U.S. production, posing challenges for midstream infrastructure businesses with surplus capacity. This time, higher U.S. production is leading to lower crude prices. In This Time Is Different, Reinhart and Rogoff take readers through the many financial disasters that befell investors who thought it was different. And yet, with due deference to the aforementioned luminaries, we think it is.

Last week we received more questions than usual from investors reviewing the mark-to-market damage inflicted by their MLP allocations. One investor noted that MLPs were responsible for fully all of the YTD losses in one model portfolio they run. If you’re wondering whether the relentless sellers possess an insight you’re missing, you have plenty of company. Higher production of hydrocarbons in the U.S. is bad for lots of players including OPEC, but it’s hard to fathom why it’s bad for the domestic infrastructure that supports the Shale Revolution. American shale oil output is on track to grow by 1 Million Barrels a Day (MMB/D) annually. Shale output of 5.4 MMB/D is now more than half of total U.S. oil production of 9.3 MMB/D, in a global oil market that’s producing 98 MMB/D.  Furthermore, the fact that U.S. shale producers are growing production at ever lower costs is more likely bad for the other 95% of global producers.

The market is failing to differentiate U.S midstream energy companies that benefit from this growth in market share from the rest of the global energy losers.  At the annual MLPA Conference in Orlando a few weeks ago, MLP managements were similarly puzzled by the weakness in their stock prices. But they were far less worried than most investors, because they generally don’t need to tap the capital markets much to finance their growth plans. 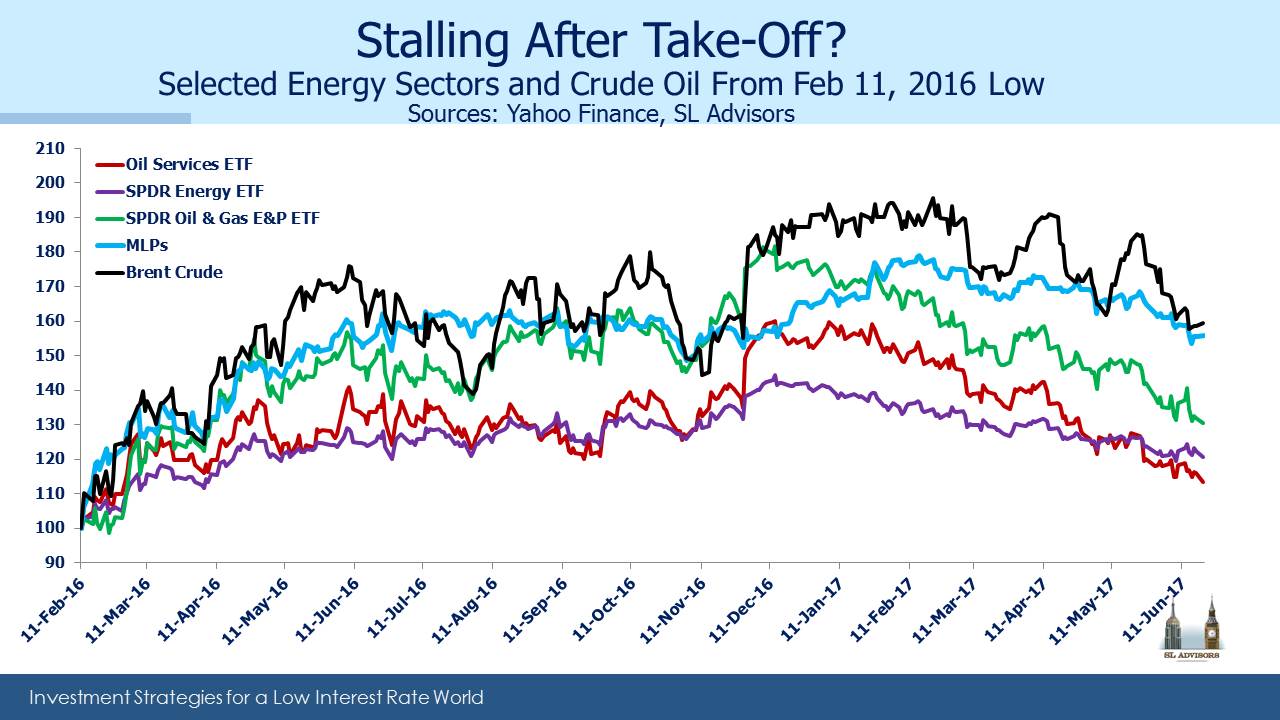 It’s hard to find research that is bearish on MLPs, which is not especially comforting from a contrarian standpoint. The most negative case is probably the view that crude is going to $30 and will take MLPs lower with it. Before ascribing some additional insight to sellers, remember that over $40BN of retail money accesses the asset class inefficiently via taxable, C-corp funds such as AMLP (see Some MLP Investors Get Taxed Twice). Our investors, self-selected as they are, are an intelligent bunch. But they (you) are not representative of an investor base that includes those who accept a 35% corporate tax drag on their returns. Investment insight is going to be rare among this subset, and based on published fund flows they are responsible for some portion of the recent selling. 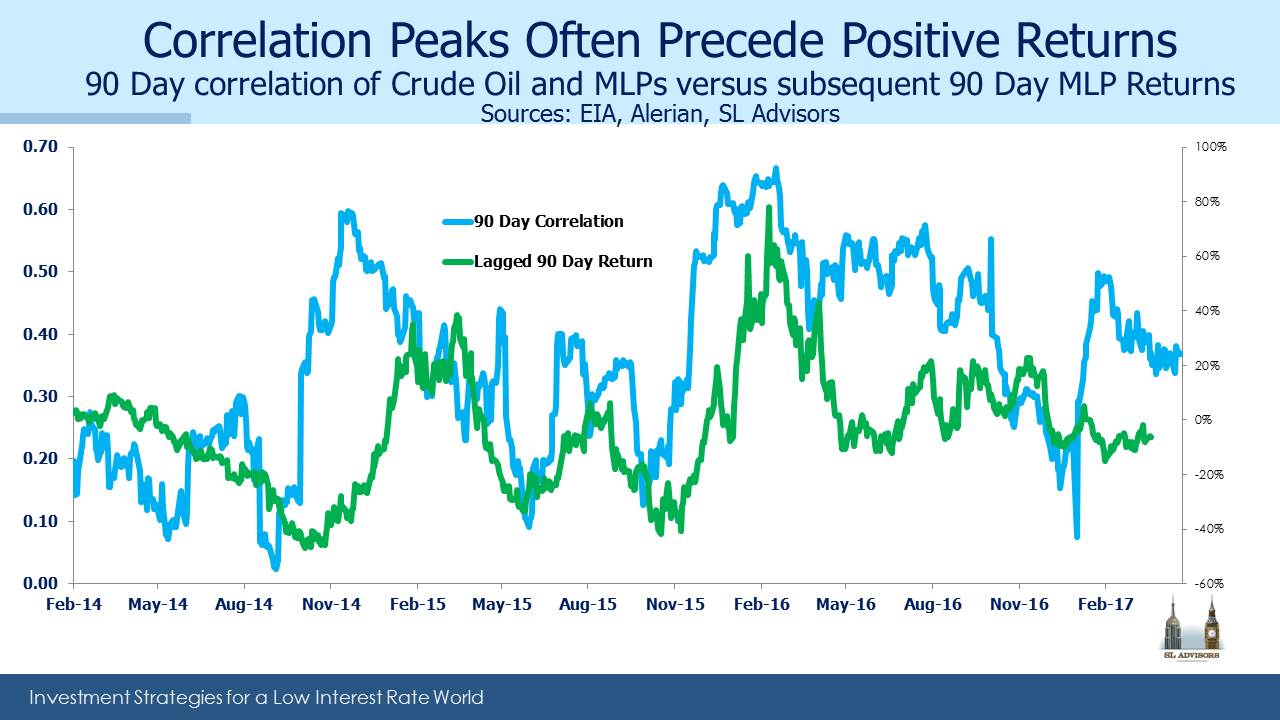 On the other hand, MLPs and crude oil shouldn’t move together nearly as much as they do, so when they dance too closely perhaps nervous sellers create an opportunity. In researching the components of the Alerian MLP Index, we calculate that only 25% of the cashflows are derived from crude oil. Some large MLPs have very little crude exposure, including Enterprise Products (EPD) at 17% and Williams Partners (WPZ) with 5%. Others such as Oneok Partners (OKS) and EQT Midstream (EQMP) have 0%. And this is the percentage of their cashflows derived from volumes of crude passing through their systems, which are only loosely affected by the price of crude. Natural Gas Liquids (mostly Ethane, Propane, Butane, Iso-butane and Pentane) are most commonly separated from the natural gas (Methane) with which they’re extracted. NGL prices tend to move with crude oil, but together these still represent less than half the cashflows of the Alerian index. As with crude, volumes are the principal driver of NGL-related cashflows, with their prices being of secondary importance. Nonetheless, MLP prices move with crude oil, reinforcing the understandable fixation MLP investors have with oil even though it’s hard to justify based on underlying fundamentals. In our fund we have an overweight to crude oil-oriented infrastructure businesses, but we estimate this at around 32%, so 7% higher than the index. 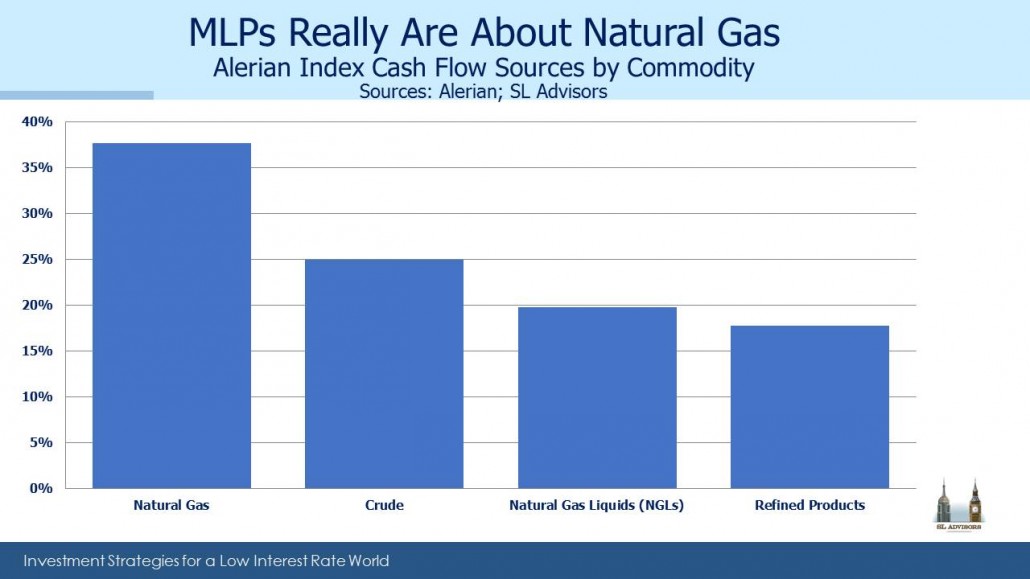 On another topic, last week we fielded a few questions from holders of Rice Midstream Partners (RMP). EQT recently acquired RMP’s General Partner (GP) Rice Energy (RICE). RMP slumped, because it highlighted a theme of our investing, which is that you don’t need to own an MLP to control it; owning the GP is sufficient. RMP investors have few rights, and the supply of accretive dropdowns they were expecting from their GP will now be redirected to EQM, a loss of future value over which RMP investors have little recourse. It’s why we invest in GPs (see MLPs and Hedge Funds Are More Alike Than You Think).

We are invested in EPD, EQGP (GP of EQM), Oneok (OKE, GP of OKS) and Williams Companies (WMB, GP of WPZ).