We’ve been looking for examples of what happens to a pipeline contract when the Exploration & Production (E&P) company is under financial stress or files for bankruptcy. The question of what happens to long term contracts with Master Limited Partnerships (MLPs) in such cases is becoming one of the more notable concerns, both for MLP investors and for those who would otherwise buy MLPs if they could get comfort on this issue.

It’s a pretty fundamental concern. Pipelines are immobile, and as a result they’re not built without a high degree of assurance that they’ll be used and paid for. What happens when this goes wrong?

Past cycles don’t provide much guidance, because disputes have been rare. We noted a couple of weeks ago (see How Do You Break a Pipeline Contract?) the case of Essar Steel Limited, an Indian steel company, which lost in Federal court when trying to void an agreement to take previously contracted natural gas.

This brought us to Crestwood Midstream, a Gathering and Processing (G&P) MLP with a very depressed stock price and at least one E&P customer (Quicksilver Resources) that is in bankruptcy. If the riskiest place in the energy sector is drilling for crude oil or natural gas at a time of abundance, the next riskiest must be providing the G&P facilities that are the first step in moving that output through the nation’s pipeline network. A single pipe to a single well has a single purpose, and if the well owner ceases to pump natural gas or merely threatens to, the G&P MLP that owns the pipe will pay attention.

Interestingly, Quicksilver continues to utilize Crestwood’s G&P services. U.S. bankruptcy law is intended to maximize the going concern value of the enterprise to the benefit of the creditors, and in most cases the assets of a failed E&P company have more value if they’re still producing. As we understand bankruptcy law, contracts that are above market can be rejected or re-priced to be market-competitive, but individual clauses of contracts cannot be selectively altered. Moreover, an MLP providing a service to a bankrupt company cannot be compelled to continue providing that service if payments are not made. 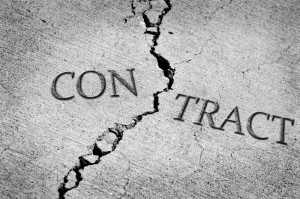 Contracts between MLPs and their customers are not made public. However, there was an interesting conclusion to one between SandRidge Energy (SD) and Occidental Petroleum (OXY). SD is an E&P company that, while not yet bankrupt, recently delisted from the NYSE. They had a contract with OXY to deliver certain volumes of CO2 and had been failing to deliver the committed amount. Under the terms of the contract, SD had racked up non-performance penalties of $113MM that were set to continue accruing. To get out of this commitment, SD gave OXY natural gas E&P assets, cash and associated midstream infrastructure. This was evidently cheaper for SD than seeking to break the contract, and shows both that companies continue to make decisions on the basis that contracts will be upheld in court but also that OXY found sufficient value in the transferred assets to satisfy their claim.

Returning to Crestwood, their prospects will tell us a lot about how such issues get resolved, because they have other G&P assets and potentially other distressed customers. The degree of financial stress they’re facing is a topic of considerable disagreement. 90% of their 2015 EBITDA was from Fixed-Fee or Take-or-Pay contracts, which traditionally involve little risk of non-payment or commodity price exposure. CEQP’s current yield of 43% reflects substantial concern among investors that 2015’s $560MM EBIDTA will drop in the future due to stress among its customers. However, it’s also possible their EBITDA will be higher in 2016. CEQP has a supportive sponsor in First Reserve who is funding an expansion project in the Permian Basin in West Texas via a 50/50 JV, and owns 16% of CEQP’s units. CEQP used to have the typical GP/MLP structure, but last year combined into one entity which eliminated the cash payments under Incentive Distribution Rights thus leaving more of the cashflow for the LP unitholders.

In fact, CEQP might represent a case study of the outcomes when your E&P customers falter, because CEQP does operate close to the wellhead where financial stress is most acute. Management is more confident than the market that their Distributable Cash Flow (DCF) will continue to cover their $5.50 annualized distribution which for the past four quarters was 1.02X. Hence CEQP LP units currently yield 43%, a level unlikely to be available a year from now; either the doubters will be right and the distribution will be cut, or the stock price will move sharply higher.

Raging Capital makes a persuasive case that the stock is cheap, and in December published an open letter with a supporting presentation advocating value-creating steps management could take, beginning with a cut in the distribution. Reasoning that a 43% distribution yield reflects healthy skepticism among investors regarding its continuation as well as the likely absence of risk-averse income-seeking investors, cutting it in half to 20% would still provide an eye-catching yield while freeing up cash to buy back stock. Saving $2.25 in annual distributions on 68.5MM shares would free up $38MM quarterly, enough to repurchase 2.9MM shares a quarter or 5% of the public float while building ~$9M in coverage (i.e by no longer paying distribution on shares repurchased). Within two years they could shrink the public float by 38%, at which point their DCF even if unchanged would be $8.57 per unit. It’s doubtful CEQP could remain anywhere near $14, since that would represent a DCF multiple of less than 2X. Or, to take a more extreme case: suppose CEQP eliminated its distribution. The stock would presumably collapse since MLPs invariably do at such times. If it dropped $5 to $7, within a year the company could have used the redirected cashflow to repurchase 75% of their units, virtually the entire public float. All they would have done is returned the same amount of cash to investors through a buyback instead of distributions. At that point with a greatly reduced public float the DCF/unit would be $21. It illustrates the absurdity of maintaining such a high dividend yield.

A key assumption is that CEQP’s customers keep performing on their contracts, or if not that they are replaced by customers that do. There’s clearly some downside risk on this issue, but CEQP offers some fairly dramatic optionality. It is a small investment of ours.

Nothing herein is intended to be legal advice. For legal advise you should seek your own legal counsel.