We generally don’t keep CNBC on at our office. Its relentless focus on the short term, punctuated with incessant commercials, make it a needless distraction. That’s why they hire attractive presenters. However, when passing the office next door I did notice a headline saying we’d gone 33 consecutive days without a 1% move in the stock market.

I presume it’s a record of sorts – there has certainly been a dearth of market-moving news lately. It reminded me of that frequent advice to stay invested because a relatively small number of months provide a surprising amount of the total return. And it’s true; using S&P data back to 1900, totaling 1,400 months, had you by some terrible misfortune been out of the market for the ten best months your $1 invested in January 1900 would have only grown to $70, rather than $363 if you’d stayed in the whole time. Mind you, even if you “only” had the $70 at the end of 1,400 months, you’d still have achieved success by longevity and probably wouldn’t care about the money.

Obviously when investors temporarily exit the market, they’re trying to avoid the bad months not miss the good ones. And here’s the thing that’s perhaps not intuitive; if our investor, in missing the ten best months also managed to skip the ten worst ones, he’d be better off than if he did nothing with a terminal wealth of $493.

This places the folly of market timing in a somewhat different light. Under the circumstances, perhaps trying to avoid the bad months is a worthwhile objective since they are disproportionately more damaging. Surely, you’re just as likely to miss a bad month as a good one, or indeed equally likely to miss the worst month as the best?

Sadly, like most investment models that can be thrown together in thirty minutes on a spreadsheet, it’s not that simple. Our market-timing investor is unlikely to miss the best or the worst months, but will probably miss the typical months. Because more months are up than down, the typical monthly return is positive. Since January 1900 we’ve had 828 up months, 59% of the total. The likelihood is that by chance he’ll miss more up months than down ones, and his overall returns will be worse. 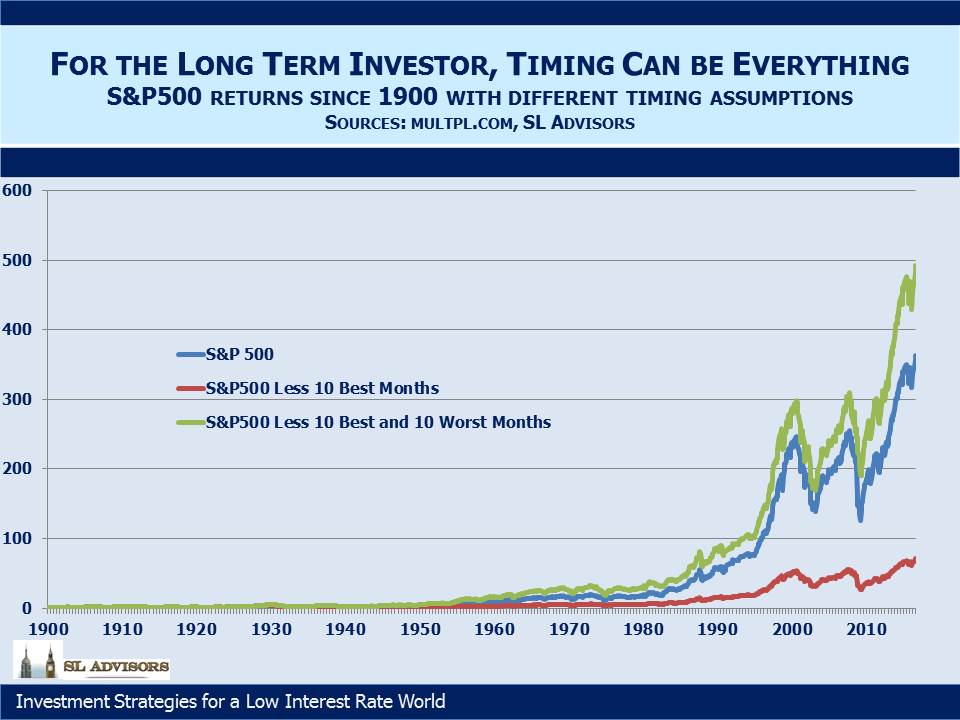