For information on our MLP mutual fund, please click the link below:

Last week’s blog post (Williams Satisfies Two Masters) highlighted the different views of cash payouts by the MLP investors who hold Williams Partners (WPZ) and the C-corp investors who hold Williams Companies (WMB), the General Partner of WPZ. WPZ investors value regular payouts whereas WMB investors are driven by total returns. WMB neatly gave both types of investor what they desired by diverting WMB dividends to buy new WPZ units which provided cash to fund WPZ’s capex program, and thereby eliminated the risk to WPZ’s distribution. One of the powerful features of the GP/MLP structure is that is allows a business to access different classes of investors who can have different objectives. As their appetite to provide capital fluctuates, the GP/MLP can access the more willing investor class.

Continuing this theme, Energy Transfer similarly found a way to make everyone happy with the same set of assets.  CEO Kelcy Warren is masterful at moving cashflows and businesses around to find value. Aligning your interests with Kelcy Warren works most of the time, even if he is occasionally ethically challenged (see Is Energy Transfer Quietly Fleecing Its Investors?).

On their recent earnings call, Energy Transfer Equity (ETE) generously announced that it would waive $720MM of Incentive Distribution Rights (IDRs) due from Energy Transfer Partners (ETP) to ETE over the next 6 quarters.  IDRs are the payments an MLP makes to its GP and are somewhat analogous to the incentive fees a hedge fund manager earns from his hedge fund. ETP traded up following the announcement of this largesse, and ETE traded down.  On the surface this is a straight transfer of value from ETE to ETP, a movement of cashflow from one pocket to the other. It’s a zero-sum transaction.

The ostensible reason is to support ETP’s stock price which will make it easier to sell new units of ETP. On the previous earnings call, Kelcy said: “In order to support ETP with its cost of equity capital in light of ETP’s current common unit price, ETE has recently advised ETP that ETE intends to waive its rights to receive incentive distributions, with respect to ETP’s 2016 issuances of common units… whether pursuant to the ATM or other offerings of common units, through fourth-quarter 2017 distributions. As these potential IDR waivers have not been approved by the ETE board, ETE is not formally bound to these proposed IDR waivers. This reinforces ETE’s commitment to support ETP.”  On the same call, Kelcy noted that, “ETE will do what it needs to do to support ETP”

ETP rose 10% on the day of the announcement. 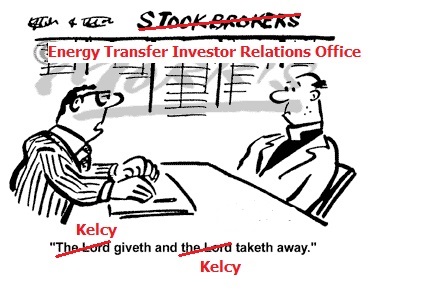 Although the conference call made it sound like an altruistic move by ETE, the relevant SEC filing noted that in exchange for these IDR waivers ETP was granting ETE new Class J units which would transfer $1.8BN of ETP’s depreciation, depletion and amortization (“DD&A”) to ETE over a period of three years (2016-18). Both ETP and ETE are partnerships issuing K-1s, so the proportional share of depreciation runs through each investor’s tax return. ETP investors will in aggregate have $1.8BN less in tax-deductible depreciation expense, approximately $3.44 per unit (there are 524MM ETP units outstanding). Assuming a 45% marginal tax rate (K-1 tolerant MLP investors are usually in the top rate) the taxable ETP investor is $1.55 per unit worse off. The IDR waivers work out to be worth $1.37 pre-tax per unit. So it’s at best a wash.

Prior statements from ETE include an assertion that ETE would not suffer any reduction in cashflows from ETP, and on the most recent conference call, Kelcy confirmed that there would not be additional IDR waivers applied to new equity raised at ETP. The IDR forgiveness is not equally spread over six quarters but is modestly back-ended. Therefore, we deduce that ETP will issue additional equity which will pay IDRs to make up for the shortfall from this IDR waiver. The rise in ETP’s stock price that followed this announcement makes it a little easier to issue equity. It also shows that ETP is valued, like other MLPs, on a pre-tax basis.

While MLP investors are drawn to the sector because of the tax-deferral that depreciation charges afford, few calculate their effective after-tax return on each individual security. They just send the K-1s to their accountant, who grumbles while charging a bit more, and the investor winds up with a lower tax bill. Figuring out which MLPs one holds are the most tax-effective is beyond most investors’ interest or ability. After-tax returns are notoriously quixotic and vary based on an individual’s tax situation. ETE management has insightfully spotted this. For this reason, most investment analysis relies on pre-tax returns. And sure enough, Barron’s quoted four analysts who gushed about the IDR waiver while ignoring the loss of tax shield (see Energy Transfer Partners Gets Fee Break from Parent, Shares Rise).

Kelcy has figured out that if investors don’t value something that highly you might as well give it to someone else. ETE investors (of which Kelcy is 18%) value the tax shield more accurately, which is clear since ETP’s stock rose even though the after-tax outcome for ETP investors didn’t add any value. Meanwhile, not only does the swap of tax shield for IDR waivers leave ETE investors better off after tax, but ETP can now issue new equity more easily, which will throw off additional IDRs for ETE indefinitely. The IDR waiver is expected to be $130M in 4Q17 after which it expires.  Starting in 2018 ETE will receive $520M more in IDRs each year for its “support” in which it gave up no cash flows and received $810M of value in DD&A units. Those Energy Transfer people are pretty clever.

We are invested in ETE and WMB

Just so it doesn’t seem as if we only pick on Energy Transfer, here’s a link to a recent TV spot on hedge funds.