The spreading coronavirus and effective end of OPEC+ were a one-two punch that caused the worst  collapse in midstream energy infrastructure stocks any of us have ever seen.

The IEA forecasts a 2.5 Million Barrels per Day (MMB/D) drop in demand for 1Q20, but clearly oil markets are pricing a bigger drop.

Medical experts typically describe Covid-19 as a form of flu that we’ll eventually learn to live with, albeit more infectious and fatal than flu. The economic disruption caused by every-day life shutting down so as to avoid infection is far harder to forecast. 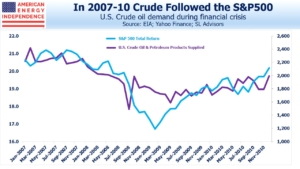 For pipeline investors, it’s helpful to look back at U.S. energy demand during the 2008 financial crisis.

Crude oil demand did roughly follow the path of the S&P500, with demand dropping as much as 2 MMB/D, or about 10%. 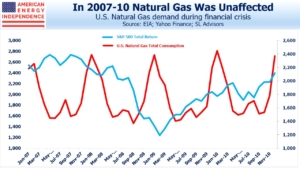 But natural gas demand followed its regular seasonal pattern with no discernible response to the economic contraction.

The pie chart shows where we consume natural gas. The question is, how much of each different segment is vulnerable to lower demand? If the U.S. quarantines entire regions, or bans mass gatherings such as sporting events, even natural gas demand may dip somewhat. But it’s most likely fairly robust. Whether people are at home or in the mall, they’re still going to want air conditioning. They’ll still need to cook meals. Industrial use isn’t going to disappear. 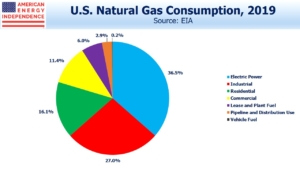 So in trying to assess the wreckage after yesterday, stable natural gas consumption seems like one of the more reliable assumptions.