Yesterday Blackstone (BX) surprised Tallgrass Equity (TGE) investors by sweetening their offer for the shares they don’t own to match the price they originally paid in March. It marks a victory for Limited Partners in TGE, which retained its partnership structure even though it’s taxed at a corporation so as to avoid issuing K-1s.

The sideletter that provided a floor on the price management received for their LP units was unfair, and caused us to criticize it in September (see Blackstone and Tallgrass Further Discredit the MLP Model) when BX announced their offer to acquire the remainder of the shares. Most sell-side analysts were embarrassingly silent in standing up for their investors, conflicted as they are by the desire to win banking mandates from the protagonists. RW Baird’s Ethan Bellamy is a standout exception, unafraid to raise awkward questions during earnings calls, which renders his research opinions more credible. Other sell-side analysts should take note.

TGE CEO David Dehaemers claimed not to understand (see Tallgrass Responds to Critics, Missing the Point) and with nobody else publicly taking his side, he brought forward his retirement. This ended a disappointing episode in an otherwise successful career. 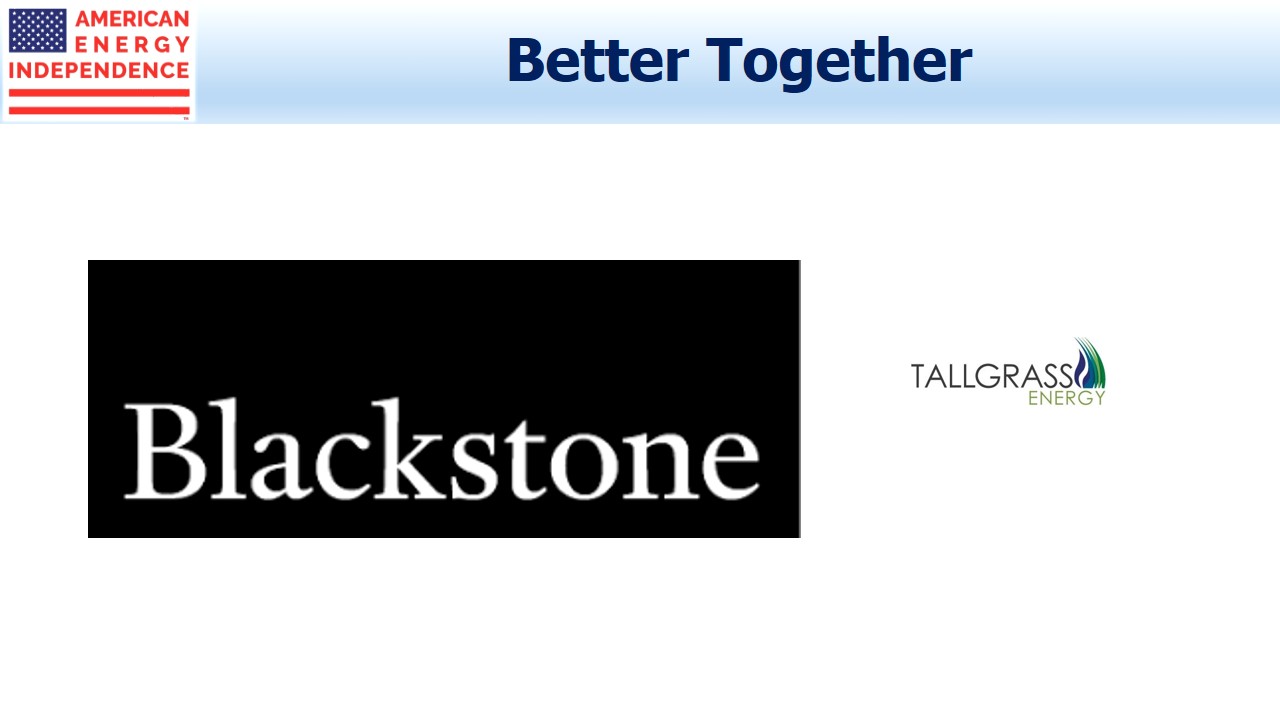 Although the degree of sweetening from BX was a surprise, once they’d invested in TGE it always made sense for them to acquire the rest. Having a public equity position in a private equity portfolio adds unwelcome valuation realism. Private equity funds are reporting far better investment returns than public markets (see Private Equity, Private Valuations), even though they occasionally commit some howlers (see Leverage Wipes Out Investor’s Bet on Enlink). GIP’s 44% partial ownership of Enlink (ENLC) can hardly be their desired position – they’ll either buy the rest or exit, realizing a substantial loss. Information on GIP’s intentions has been sparse. PE investments rarely lose value as quickly as this one, and explaining it has been an unwelcome distraction for GIP’s overworked investor relations people.

TGE’s pending disappearance as a public company also represents another step in the shrinking universe available to Alerian’s MLP indices. TGE was a 4.7% weight in the Alerian MLP and Infrastructure Index (AMZI), followed by the tax-burdened ETF AMLP (see MLP Funds Made for Uncle Sam). TGE is far less than 4.7% of North American midstream energy infrastructure, as shown by its 2.4% weight in the American Energy Independence Index. Because AMZI is limited to partnerships, the TGE proceeds will have to be reallocated across a subset of the pipeline sector, further increasing AMLP’s concentration and rendering it even less representative (see AMLP’s Shrinking Investor Base).

INVEST IN ENERGY INFRASTRUCTURE. BE PART OF AMERICA'S ENERGY REVOLUTION.