Although the equity research business is dominated by large, sell-side firms hoping to generate trading commissions from their (usually bullish) recommendations, there are alternate business models out there. Prescience Point is a hitherto unheard of research firm with no known location (so presumably outside the U.S. since they’re not registered) and no publicly disclosed employees. They focus on research uncovering companies’ fraudulent activities. Although they write about what they find, so as to (presumably) sell their research to subscribers, they also short the stocks they cover.

Short sellers are a fascinating bunch. The odds are stacked against them. Company managements and sell side research (both of which are generally bullish) are in the opposite corner from them. In addition, short positions have almost unlimited potential loss with gains limited by the proceeds received for the sale of the stock. Markets generally rise over time, so these headwinds to success mean that short sellers need to carry out pretty detailed work, and they need to be right.

What Prescience can do (based on their website) is:

(3) Short the stock themselves prior to its public release

(4) Buy back the shorted stock when the report is out

CBI’s stock recently behaved as if Prescience had imposed its business model described above on it. When CBI began to weaken in early June on no apparent news, we assumed perhaps investors were becoming more wary of their backlog of infrastructure orders given the developing tumult in the Middle East. The stock weakened further (as shown in the chart below) until Prescience released their report. At this point reasons for the earlier weakness became clear, and additional sellers unwilling to subscribe but now finally aware of the report’s insight, were convinced to sell.

There doesn’t seem to be anything illegal with this. In any event, Prescience appears to be outside the U.S. and their website is pretty clear in warning that they trade both before and after releasing their reports. And it’s not obvious that there’s even anything wrong with what they’re doing. They have a point of view; they share it with clients; they act on it; they publicize their view. And they tell you this is what they’re doing.

In fact, their research doesn’t even need to be right. To be valuable, all that’s required is for the stock price to drop after Prescience and its clients have sold. What’s needed is a group of sellers who will sell after the report is public, for it’s this last drop that creates the profit opportunity. As long as there are enough uninformed sellers willing to sell the stock on the public release of the report so that the earlier, informed sellers can cover their positions, the business model will work. This presumably limits the number of subscribers because too many of them might cause the stock to rally on the report’s publication as they overwhelmed the fewer sellers involved. It’s quite an interesting business model; not quite God’s Work, as Goldman’s CEO Lloyd Blankfein so regrettably once described what his company does, but it’s a living of sorts I guess.

We’ve held a small long position in CBI for some time. We were puzzled by the early June sell off, but when the report was published on June 17th,the reason for the stock’s weakness became clear. Warren Buffett has famously said that in a poker game, if you don’t know who the patsy is, you’re the patsy. June 17th was a day during which we guess that patsies were unusually active in CBI. We just don’t know if the patsies were the sellers (late to the party, having missed the opportunity to sell at higher prices during the prior few days) or the buyers (willfully ignoring the now public  short thesis offered by Prescience).

For our part, we didn’t find much compelling in their report and so bought more CBI on June 17th. We just don’t know yet if we’re the patsies or not. 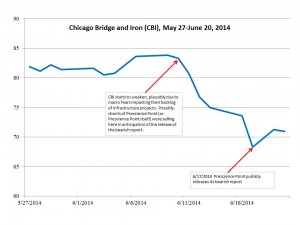