On Thursday the U.S. Energy Information Administration (EIA) released updated figures on proved reserves as of 2016. In order to count as proved, companies must be reasonably certain that the reserves are recoverable under existing operating and economic conditions. Improvements in technology have increased the amount of recoverable reserves from some shale formations.

The dramatic increase in Permian reserves is driving increased production. As we noted (see Rising Oil Output Is Different This Time), Permian output is set to reach 3 Million Barrels per Day (MMB/D) in March. It’s increasingly looking as if pipeline demand is approaching capacity. JPMorgan recently said they expect pipeline bottlenecks to develop in 2H18 and into 2019, before additional capacity currently under construction is added. But they expect that by 2020 tightness will occur again. Permian production is expected to reach 3.5 MMB/D by the end of this year, and continue rising to 4.1 MMB/D through 2019 and 4.9MMB/D by 2020. 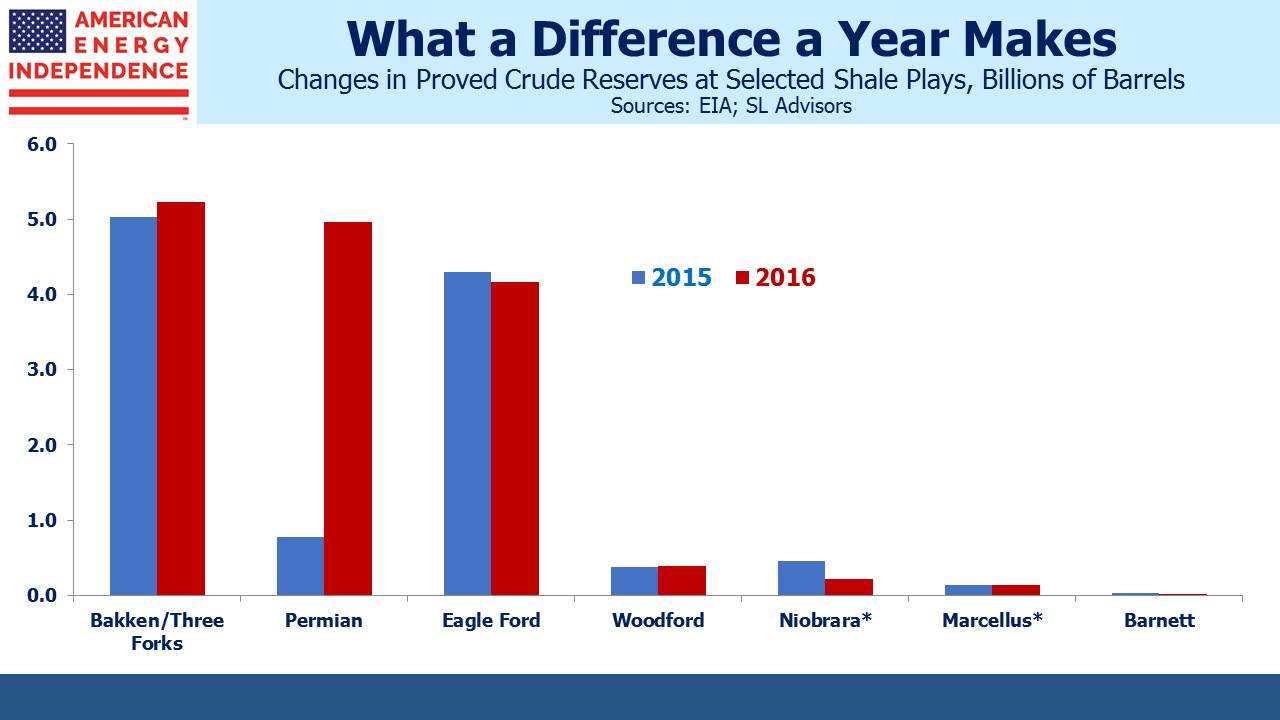 New takeaway capacity will be required by then. In recent years, midstream infrastructure businesses have rarely missed an expansion opportunity even if it led to stretched balance sheets. NuStar (NS) was the most recent firm to acknowledge such over-reach. The collapse of their GP/MLP structure and distribution cut announced ten days ago were caused in part by the failure of their early 2017 Navigator acquisition to ramp up cashflows quickly enough. The industry’s history of providing new capacity too readily has diverted cashflows from distributions to growth and debt repayment, frustrating traditional investors. They’ll be hoping that recent financial discipline sweeping across energy producers similarly afflicts pipeline operators, resulting in higher returns on future projects.

Overall U.S. proved reserves of crude oil and lease condensate were virtually unchanged in 2016 versus 2015 at 35.2 Billion Barrels. Gains in the Lower 48 states were offset by declines in Alaska and offshore. Proved reserves of natural gas rose 5% to 324 Trillion Cubic Feet, as total additions were 150% of production. The U.S. continues to enjoy a substantial cost advantage in natural gas production, with exports of Liquified Natural Gas (LNG) set to reach 10 Billion Cubic Feet per Day (BCF/D) by late 2019, 3% of global consumption.

Commodity prices affect proved reserves as they have to be commercially recoverable. The 2016 oil and gas prices used for these calculations were 15% and 6% lower than in 2015. When the 2017 figures are published they’ll be based on oil and gas prices 20-21% higher. U.S. reserves are likely to keep growing.