On Sunday we reviewed Vaclav Smil’s Natural Gas: Fuel for the 21st Century. Smil writes about how the world uses energy, well supported by useful facts and figures. Our original review was a brief summary of the book. Below, we highlight some of the fascinating proof statements Smil includes in his book.

For example – as a drill bit advances into a rock formation, the weight of the drill string above it increases such that it would surpass the 6.5-9 tons of weight that is optimal for fast rock penetration. So the block assembly atop the derrick on the drill pad needs to support the weight of the entire drill and string combination.

Computer-generated 3D visualizations of rock formations include large-scale, immersive displays where people can walk inside the imagery. 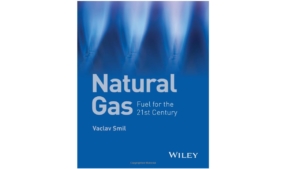 There are about 3 million miles of mainline and other pipelines that link natural gas production areas and storage facilities with consumers (EIA, 2019, updated from lower figures in Smil’s book).

We often note that pipelines can provide many decades of operational life, depending on construction techniques and subsequent maintenance. Smil quotes a report from The Role of Pipeline Age in Pipeline Safety by Kiefner and Rosenfeld, “…a well-maintained and periodically assessed pipeline can safely transport natural gas indefinitely because the time-dependent degradation threats can be neutralized with timely integrity assessments followed by appropriate repair responses.”

Many industries rely on natural gas for heat. The food industry uses pasteurization (heating to 72°C) for virtually all canned and conserved items, as well as dairy products, juices, wines and vinegar eliminate harmful pathogens.

Paper manufacturing requires heat to dry wet paper. Typically 1.1-1.3 lbs of water are removed for every 1lb of paper.

Methane (CH4) is the most important input for the synthesis of ammonia (NH3) via the Haber-Bosch process, which has boosted agricultural productivity, without which the world couldn’t feed its current population.

Ethane and propane, both natural gas liquids, are often found in natural gas along with more voluminous methane (known in isolation as dry gas). These are feedstocks for the production of polyethylene, polypropylene and polyvinyl chloride – in other words, plastics. The U.S. petrochemical industry has been a big beneficiary of these cheaper inputs, and the U.S. is easily the biggest exporter of natural gas liquids (of which ethane and propane are the two most important). For a fascinating view of the plastics business, check out Jordan Blum’s terrific piece from 2018 in the Houston Chronicle’s Texas petrochemical plants turn ethane into building blocks of plastic. It shows how ethane from Texas is formed into polyethylene pellets, then shipped to Vietnam where it’s turned into plastic packaging for frozen shrimp. It finally returns to a Houston-area grocery store.

Ethane production is part of the Shale Revolution. If you’re wondering what its growth prospects are, consider that consumption is growing at almost 4% annually, and that per-capita consumption in non-Japan Asia is around a quarter of the developed world. Plastics use rises with living standards – clearly, much more re-use is required given consumption patterns.

The Center for Strategic and International Studies reports that there are 70 cross-border pipelines for natural gas, NGLs and petroleum products between the U.S. and Canada (Smil counted 31 crossing points just for natural gas). When considering U.S. energy security, Canadian-sourced imports are practically riskless.

Although LNG transport has been thankfully safe, back in 1944 a poorly constructed storage tank in Cleveland failed. The resulting explosion killed 128 people. In 2004 an explosion at an LNG plant in Algeria killed 26 people. I grew up 22 miles from Canvey Island in the UK, an LNG delivery point since 1964 with little else to attract a visitor. My childhood was happily free of LNG incidents. Facilities that handle LNG in the U.S. undergo an exhaustive Federal permitting process.

Long before fracking, more quixotic attempts had been made to extract natural gas held tightly in shales. Incredibly, the U.S. experimented with explosions of nuclear devices. Three tests took place 1967-69 in New Mexico and Colorado using devices 3-9 times as powerful as Hiroshima. Full scale production envisaged 40-50 such detonations annually, but the early results were so far below expectations that the project was abandoned.