Climate change is driving tremendous upheaval in the energy sector. One consequence is that making long term investments is exceptionally difficult. A large, conventional oil or gas project is exposed to uncertainties around GDP growth, production costs and commodity prices over a payback period that can extend 10 to 20 years or more. Public policy changes add further uncertainty, which is why big projects are shrinking, and investments with a faster payback are gaining favor. The short-cycle projects offered by U.S. shale are one answer to energy production at a time of uncertainty.

There are at least seven entities publishing projections on long term global energy use, and because of multiple scenarios they produce 13 forecasts. Resources for the Future, a non-profit research institution, has helpfully combined these in Global Energy Outlook 2019: The Next Generation of Energy (“GEO”) so as to allow easy comparison. These fall into three categories of energy consumption to 2040 based on different public policy regimes: (1) unchanged policies, (2) likely new policies, and (3) policies designed to lower CO2 emissions. 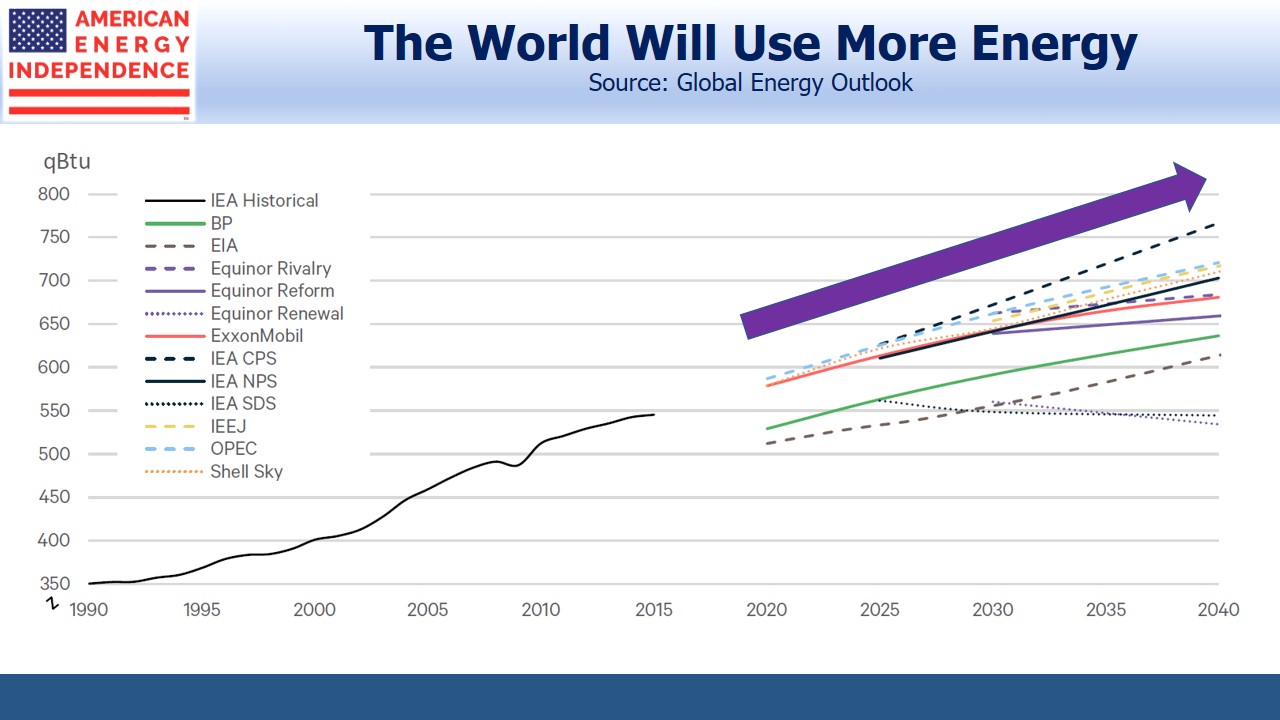 Surprisingly given the diverse set of forecasts and long horizon, there is reasonable consensus in some key areas. Energy consumption will continue to grow, driven by rising living standards in developing countries and increased population. Lowering CO2 emissions pits wealthy countries (“West” in GEO terminology, meaning Europe, Eurasia, North America, South and Central America) willing and able to constrain energy use against the aspiration to western living standards in non-Japan Asia (“East” in GEO which is Asia-Pacific but includes Africa and the Middle East). An estimated 1.1 billion people don’t have access to electricity today. 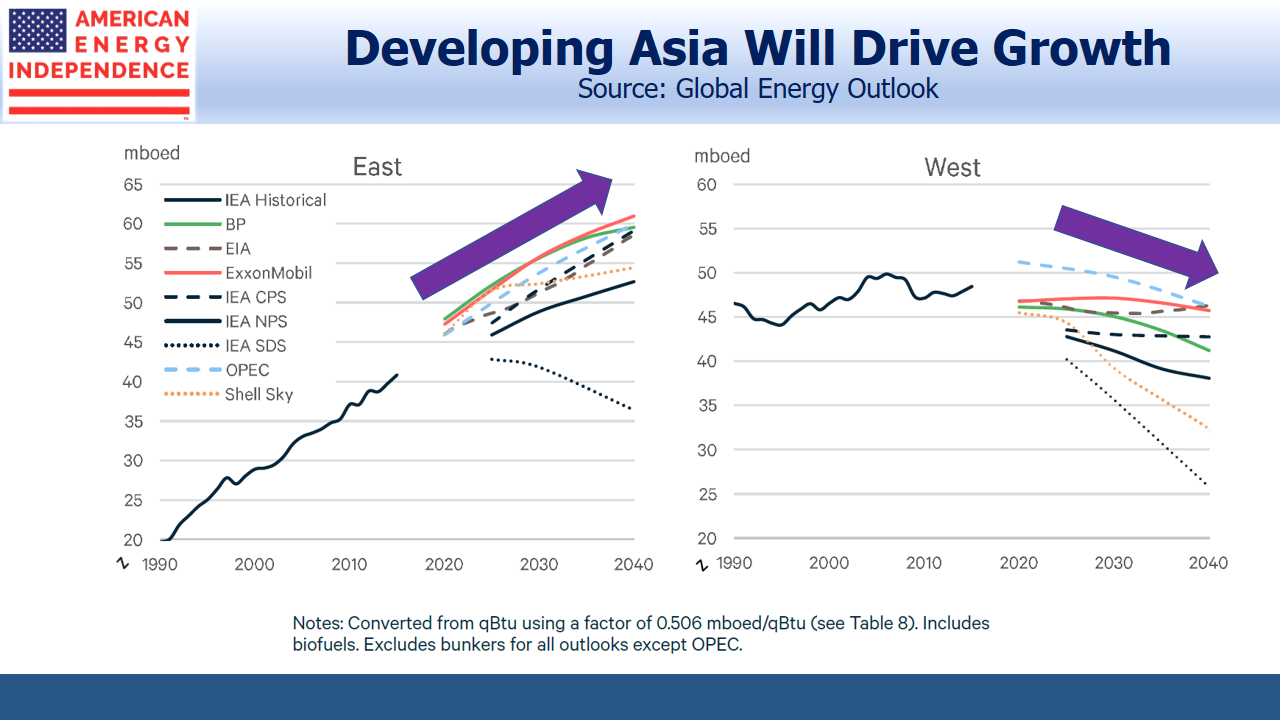 Consumption of oil and related liquids reflects greater auto ownership, aviation and plastics use in the East, more than offsetting improved efficiencies which will curb demand in the West. But the bigger challenge remains global coal consumption, where East and West are moving in opposite directions. China alone burns 6X as much coal as the U.S.  In fact, China consumed more coal last year than the rest of the world combined.  Any path to reduced climate change with today’s technologies includes sharply reduced coal consumption. 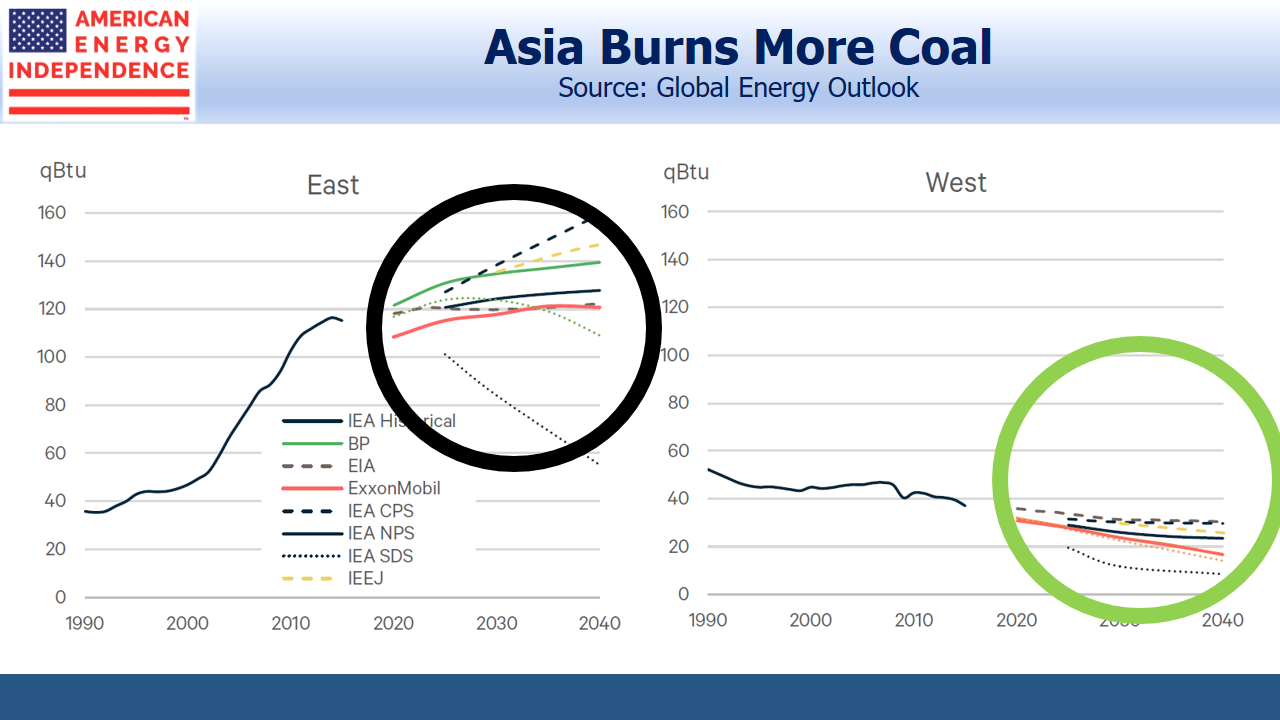 Substitution of natural gas for coal underpins our constructive outlook for U.S. exports of Liquified Natural Gas (LNG). Even on current policies most GEO forecasts see steady growth in natural gas. If the countries of the East decide to use less coal than most forecasts expect,LNG should see additional demand growth. 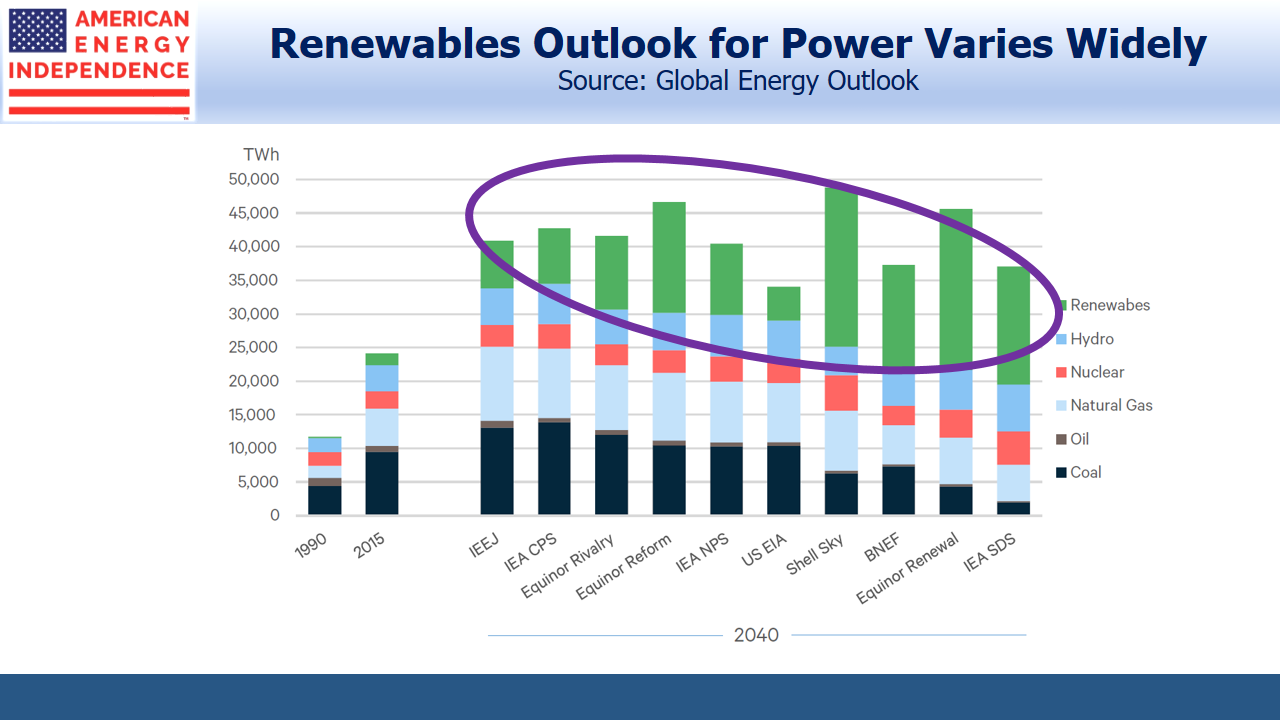 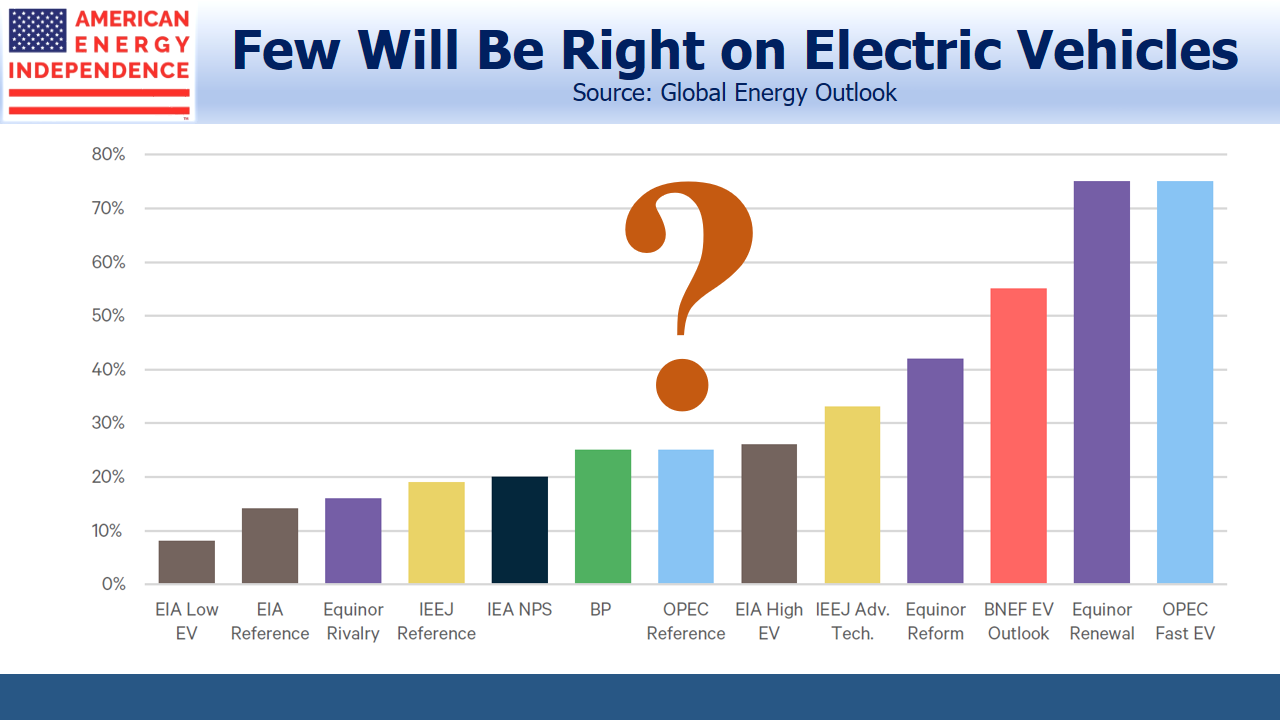 Electric vehicles (EVs) are marketed as a reduced CO2 solution, although when you properly account for emissions in their manufacture and battery disposal, the benefits are murky. It also depends on how the electricity used is generated. Wyoming relies exclusively on coal, making a Tesla purchase in the Cowboy State an environmentally unfriendly choice. Estimates of global EV penetration in two decades vary widely. 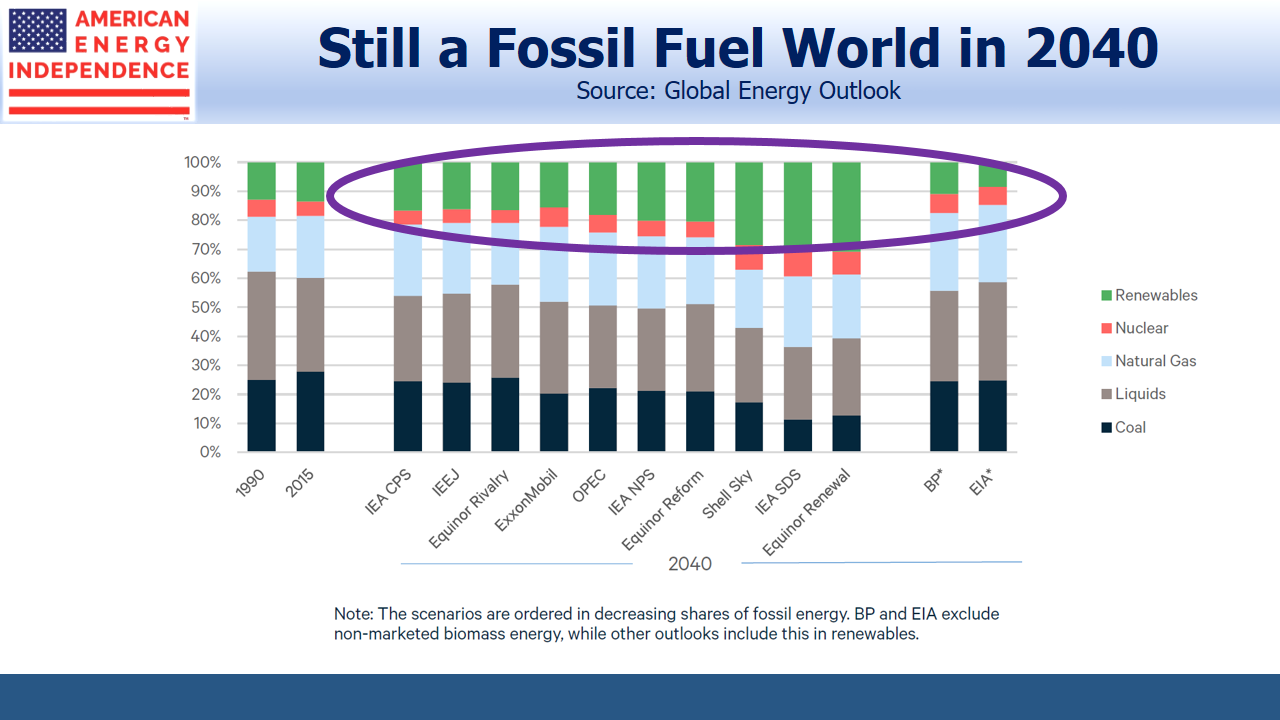 Most of the promise of renewables lies in their generation of clean power, and electrification of the world’s energy consumption is part of any attempt to tackle climate change. But the production of steel, cement, fertilizer and plastics rely on the high heat generation and other chemical properties of fossil fuels. Aviation is unlikely to use batteries in the foreseeable future. The result is that renewables penetration of total primary energy is expected by most forecasts to increase modestly,  to around 20%.

The conflict between energy use and emissions is shown in the three forecasts that incorporate reduced CO2. Two of them assume falling energy consumption, which seems politically implausible for countries of the East barring transformational improvements in the technology around energy use and storage. 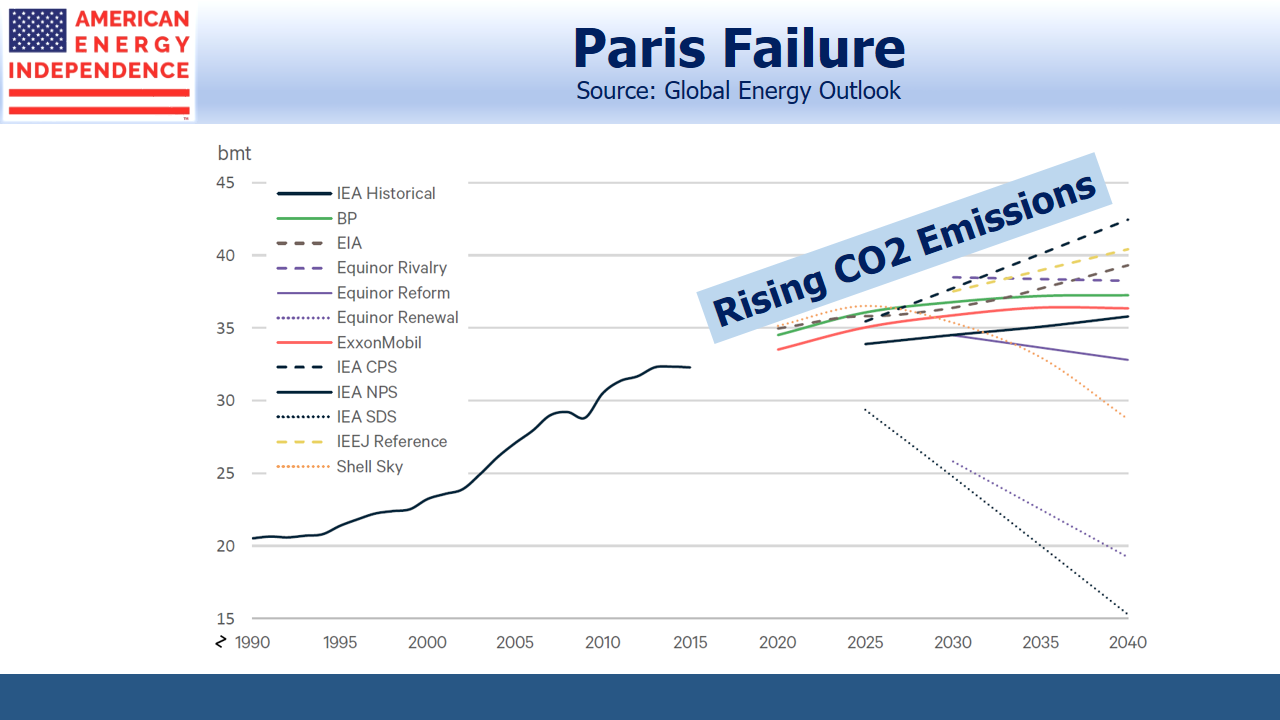 Every energy investor needs to stay current on trends and developments in energy use. The GEO report is a useful reference guide.