Many MLP management teams have pursued growth at the expense of honoring their promise of stable distributions. We think the sector’s persistently high yields need explaining. Last week’s blog post (Kinder Morgan: Still Paying for Broken Promises) drew thousands of pageviews and over a hundred comments on Seeking Alpha.

Although Kinder Morgan (KMI) got there through a series of steps, ultimately they redirected cashflows from distributions to new projects. From an NPV standpoint, financial theory holds that investors should be indifferent to how a company deploys its cash as they can always manufacture their own dividends by selling some shares.

Markets don’t work that way. Capital investments are not an expense, they’re a use of cash. But the dividend cuts required to fund them were treated as a drop in operating profit by investors. KMI should have understood this, because for many years prior to 2014 they sought investors who valued stable dividends. KMI then decided they no longer wished to appeal to those investors, and their valuation still reflects the betrayal. The bitterness of many investors is on full display via the comments on last Sunday’s blog.

KMI’s problem of an undervalued stock is self-inflicted – but what about other MLPs who have been faithful to their income-seeking investor base? Magellan Midstream (MMP) does all the right things: 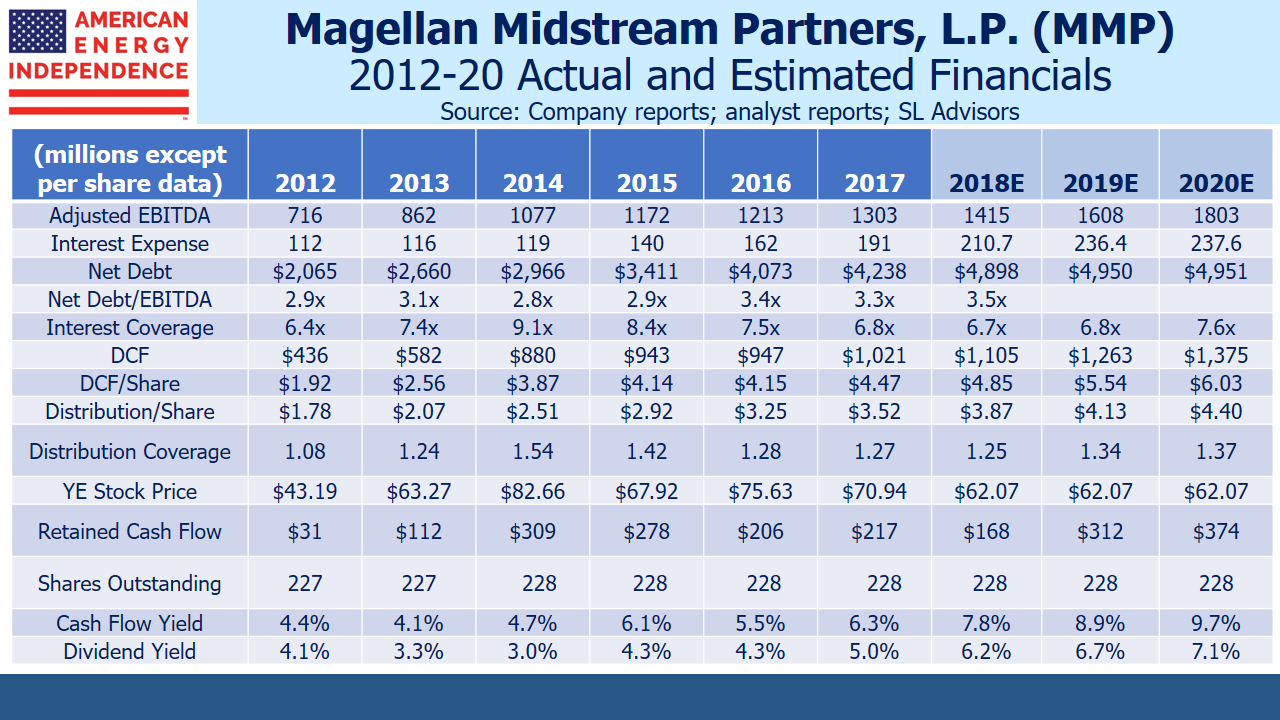 Such judicious capital management has probably caused MMP to pass on growth opportunities that others have chosen. Energy infrastructure analysts widely hold that the sector remain undervalued. Dozens of MLP distribution cuts are at least part of the reason – so a company that has remained steadfast should stand out.

But while MMP’s unwavering embrace of its principles has helped, it hasn’t been enough to truly separate them from their less reliable peers. 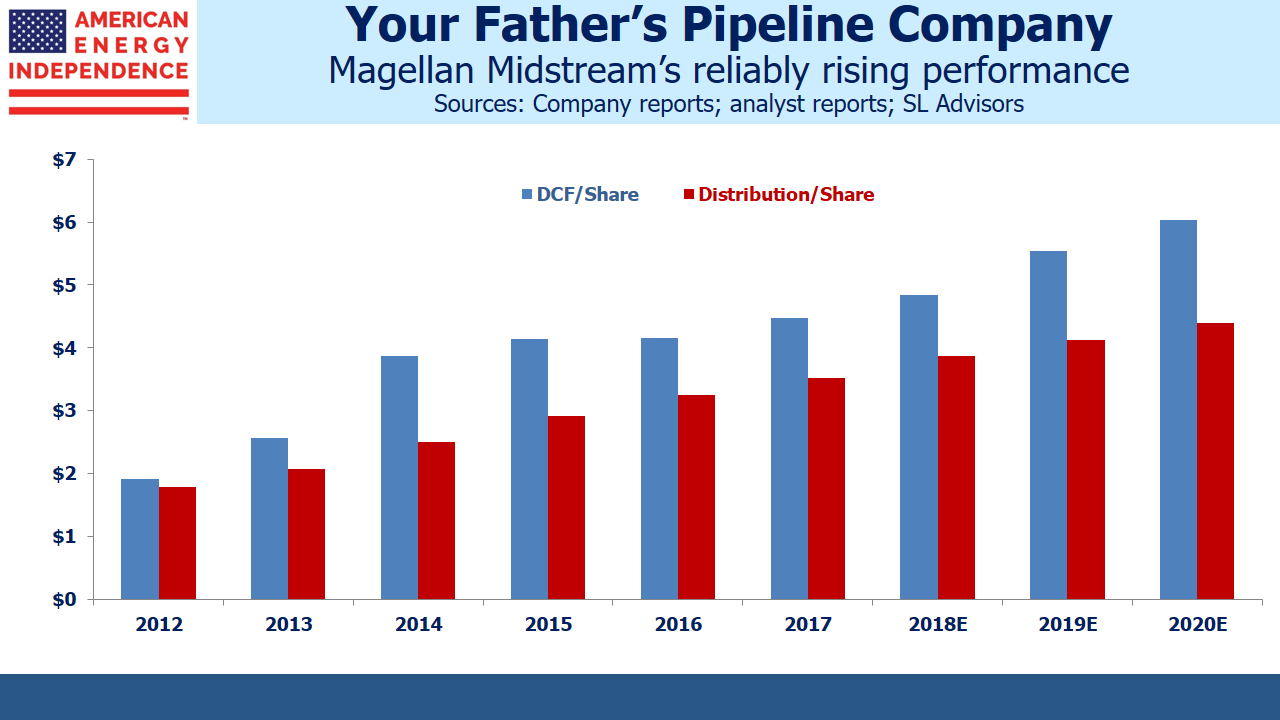 MMP’s leverage has risen, from 2.8X to 3.5X, but will drop back next year as new projects come into production. Even at 3.5X it is comfortably below the 4X that most of their peers target.

Magellan’s management team hasn’t issued equity or made dilutive acquisitions.  They’ve done just what they promised by increasing cash flows & distributions while maintaining a strong balance sheet.  And yet, MMP’s stock price is 26% below where it ended 2014. 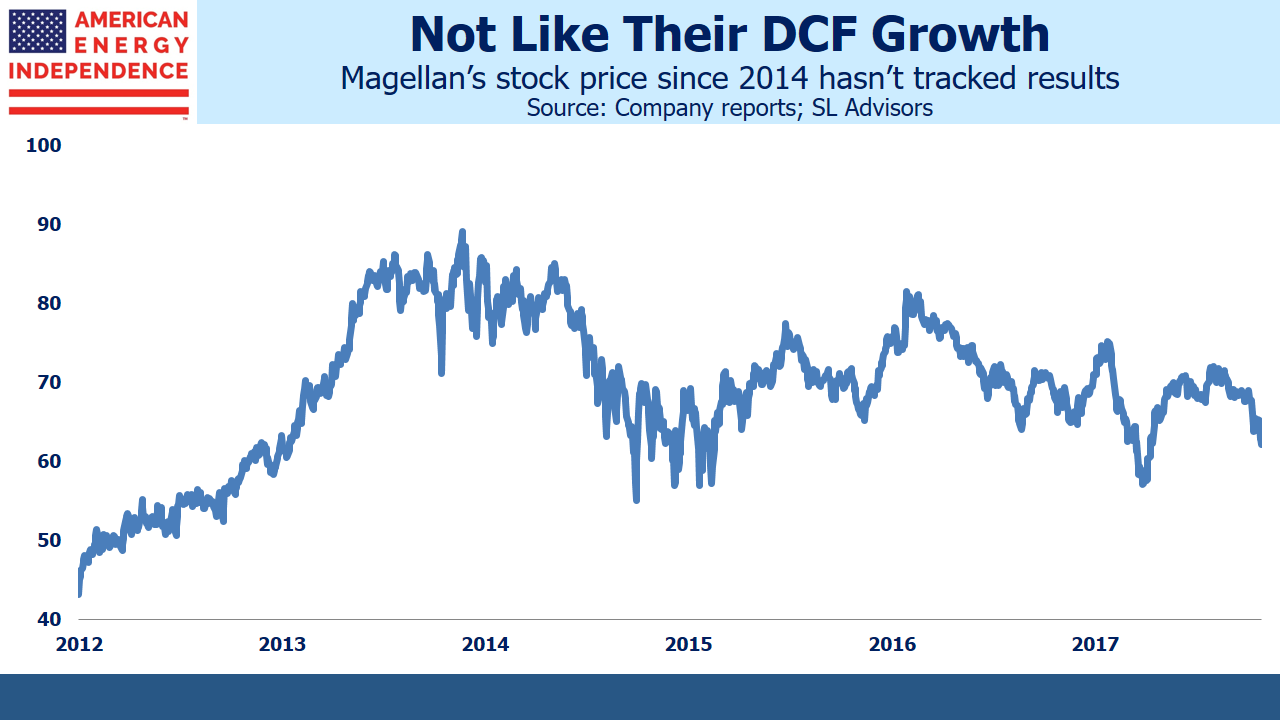 MMP’s yield is more than 2% below the AMZ, reflecting a valuation premium relative to the MLP index. But the entire sector is laboring under the history of dozens of distribution cuts, which have lowered the payout on the Alerian MLP ETF by 30%. MMP’s valuation has moved in the opposite direction from its steadily improving operating performance in recent years, reflecting that traditional MLP investors remain far less enthusiastic than in the past.

The most common question asked of investors is, given persistent undervaluation, what is the catalyst that will drive prices higher? We showed last week that an MLP’s DCF yield is analogous to the Funds From Operations measure used in real estate, since it represents cashflow generated after the cost of maintaining the assets but before investment in new projects.  On that basis, MMP’s 9.1% DCF yield (based on $5.54 per unit for 2019) is pretty attractive for a long term holder.

However, many investors prefer immediately rising prices following a purchase to confirm their buy decision. Continued strong earnings should support increases in payouts. 3Q18 results for pipeline companies have been strong. Current forecasts are for 5-6% annual distribution growth for MLPs – slower than their growth in DCF as they build coverage for their distributions. Since many MLP managements continue to believe their stock undervalued, they prefer internally generated cash to issuing expensive equity. We agree.  We expect dividend growth for the broad American Energy Independence Index (80% corporations and 20% MLPs) of 10% next year.

We are long MMP and KMI.