When it comes to limiting CO2 emissions, the results are not always what you’d expect.

Debates about climate change often draw zealots on both sides. The common accusatory opener, “Do you believe in global warming?” betrays the binary, almost religious argument between those who think we’re wrecking the planet and those who don’t. Pragmatism is rare on either side.

The science of climate change is complex, and we won’t attempt to assess man’s contribution to global warming. For a thought-provoking view of the issue, read Alex Epstein’s “The Moral Case for Fossil Fuels”. In one section, Epstein comments on U.S. Secretary of State John Kerry’s 2014 plea for Indonesia to cut carbon emissions to fight global warming. From 2006-16 Indonesia’s CO2 emissions grew by 3.1% annually, the Asian average. It’s no coincidence that in 2016 Indonesian life expectancy reached 69, up by 17 years over the previous half century.

As in much of the developing world, Indonesians are living longer. This is because increased energy use supports cleaner water and food, improved hygiene and better medical care, staples of developed country life. Because fossil-free energy is not yet price-competitive, its adoption implies using less energy. This in turn means shorter life expectancy for Indonesians and citizens of other developing countries. If the science around man-made climate change was unequivocal, it would imply acceptance of briefer lives today so that subsequent generations may live longer. But the science isn’t clear, and a warmer planet may be manageable. Moreover, climate prediction models have consistently overestimated actual warming. Epstein’s book offers a rare, stimulating perspective and seizes the moral high ground assumed by the anti-fossil fuel crowd. He defines improving human life as the standard against which to test climate change policies. By this measure, greater energy use has been a success.

The BP Statistical Review of World Energy 2018 reports on emissions of carbon dioxide, a greenhouse gas. It has some surprising facts. 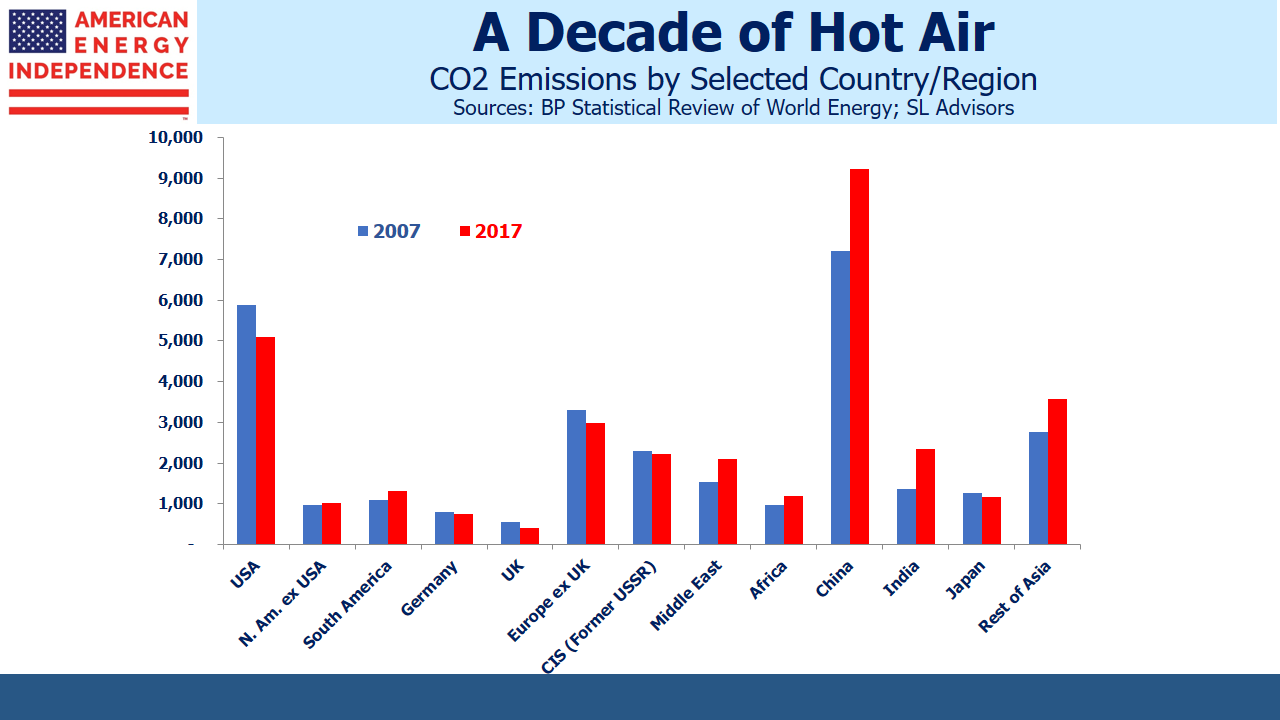 Global CO2 emissions continue to rise, reaching 33.4 Billion tons last year. Yet, many will be startled to learn that America easily leads the world in reducing CO2 output. Our reduction of 794 million tons over the past decade is a 1.4% annual rate of decrease. The Shale Revolution has certainly helped, although U.S. CO2 emissions peaked in 2005, long before Shale started to have its positive impact. Improved energy efficiency is one reason. More recently, cheap natural gas, combined with regulatory constraints on coal-burning utilities, have favorably altered the mix of hydrocarbons burned to produce electricity. Regrettably, the Trump Administration’s weakening of Obama-era coal constraints will moderate this positive trend.

Another surprise is that the UK managed the second biggest ten-year drop in CO2 emissions, at 170 million tons. This represents a 3.5% annual reduction rate, easily the best for any big country. Lower coal use is similarly the cause here, caused by exhaustion of commercially accessible coal reserves. 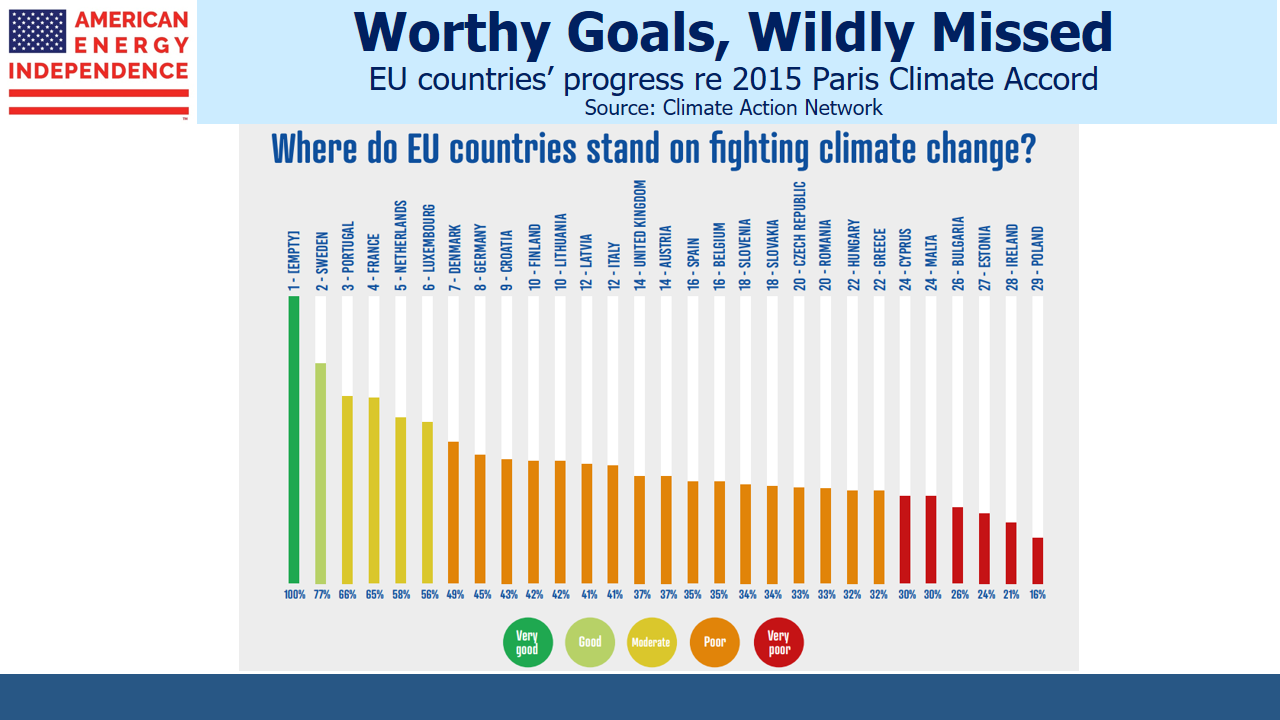 The 2015 Paris climate accord represents the world’s desire to combat climate change through reduced greenhouse gas emissions. The U.S. withdrew from it last year. The Climate Action Network, an EU-sponsored NGO, finds that only five EU members are even halfway on track to meeting their obligations under the Paris accord. Some of the most vocal Paris supporters have been the biggest laggards.

For example, Germany has famously managed to be a leader in renewables while failing to lead in emission reductions. Heavy dependence on solar and wind requires baseload electricity generation for when it’s not sunny or windy. In Germany, that’s primarily coal (see It’s Not Easy Being Green). As an unfortunate consequence, Germany plans to increase its reliance on Russian natural gas via the Nord Stream 2 project.

Spain, Italy and Greece have all managed very credible 2-3% annual reductions in CO2 emissions. However, this is due to chronically weak economies: over the past decade, Spain has managed only one quarter of GDP growth above 1% and Italy none, while Greece has been in economic purgatory. By constraining growth in southern Europe, the Euro has been environmentalists’ most effective tool.

China produces 28% of the world’s CO2 emissions, spewing out 9.2 Billion tons which is 50% more than second placed America. This is almost four times India’s emissions level, even though they have similar sized populations. However, India is catching up, with a CO2 growth rate twice China’s.

Over the past decade, China’s increased CO2 output of 2.02 Billion tons was 60% of the global increase. Clearly, lowering CO2 won’t happen without China’s help. That will require reconciling conflicting objectives: developing countries are striving to achieve developed country living standards and longevity, which requires more energy use. Developed country advocates of reduced emissions are, in effect, seeking to slow this progress.

Thoughtful advocacy of renewables recognizes the symbiosis with natural gas in providing reliable electricity generation. The purity of thought required of renewables advocates has them rejecting even those fossil fuels that can help achieve lower overall emissions. Few would enjoy a world in which the Sierra Club had achieved all its goals.

Fossil fuels aren’t equally bad. Electricity generated by burning natural gas results in around half the CO2 output as does coal, and far less damaging particulates. Some may be surprised to learn that investing in fossil fuel infrastructure can be consistent with desiring a cleaner planet. But that’s where your blogging team sits, occupying the lonely, pragmatic middle ground and advocating natural gas as an environmental solution.

Natural gas is going to be a vital part of our energy mix for decades to come. Although movements in crude oil prices drive sentiment around U.S. energy infrastructure stocks, we have over 300,000 miles of gas transmission pipeline compared with 79,000 moving crude oil. The American Energy Independence Index provides broad exposure to the U.S. energy infrastructure network. It has a long, bright future ahead of it. We expect 10% annual dividend growth this year and next on its constituents. 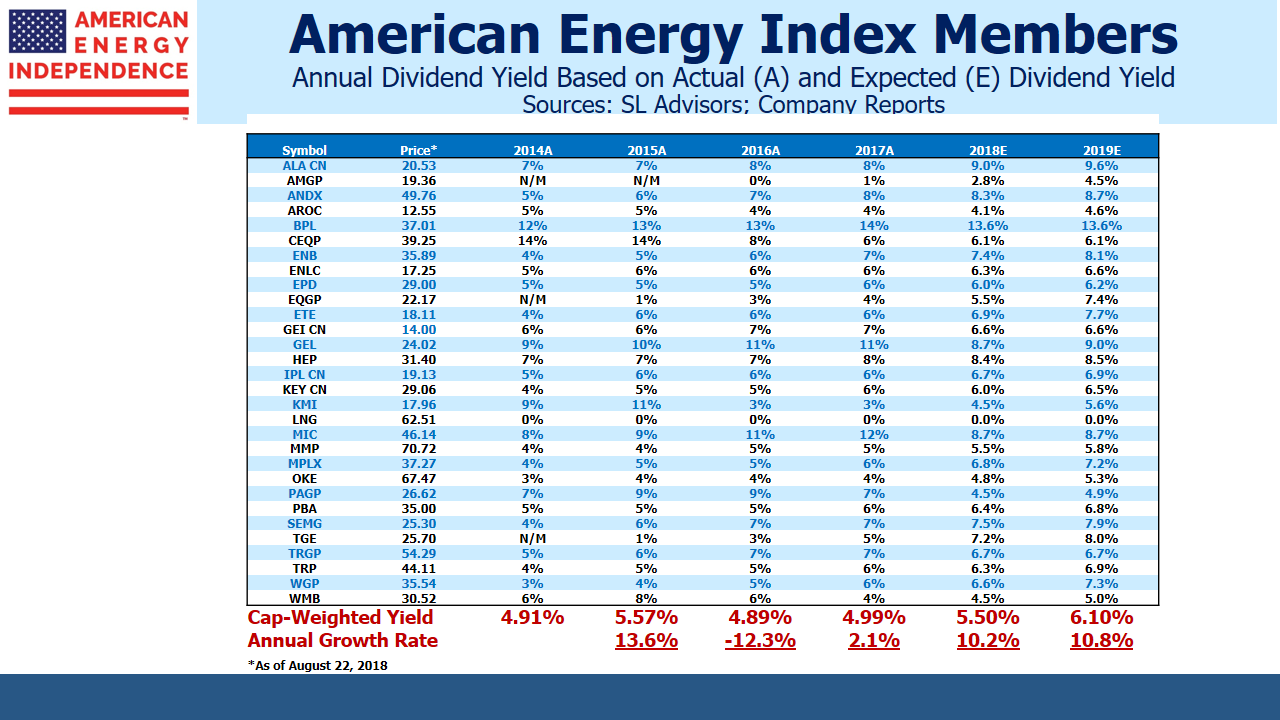 The Short Cycle Advantage of Shale Could Oil “Super-Spike” Above $150?
Scroll to top