“FAANG” stocks (Facebook, Amazon, Apple, Netflix and Google, now called Alphabet) were rising for most of the year. For investors who didn’t find that exciting enough, BMO Capital Markets Corp helpfully issued the MicroSectors FANG+ 3X Leveraged ETN (FNGU). As the name suggests, it gives you three times the daily return on these, plus another five for good measure (Alibaba, Baidu, NVIDIA, Tesla and Twitter). That I don’t personally know any buyers reveals more about the sedate company I keep, because there’s clearly a ready market for leveraged ETNs. Last week DGAZ, Credit Suisse’s ETN designed to provide 3X the downside to natural gas, collapsed as natgas soared, losing 81% of its value over the past month.

The Fact Sheet for FNGU warns it’s, “not suitable for investors with longer-term investment objectives.” What other investor types are there? Because such securities maintain constant market exposure, they have to rebalance every day. Leverage magnifies the effect of compounded returns. A stock that rises and falls by 1% on alternate days will lose half its value in 13,860 days. If it moves 2% this only requires 3,465 days, while 5% takes 553 days. You get the picture. One can think about the half-life of these leveraged products – how long would it take them to lose 50% given historic volatility. With daily moves in natgas of 1.2%, DGAZ had a half-life of 1,087 days. The recent spike in prices has hastened its demise.

It’s not only DGAZ buyers who lost big. The author of The Complete Guide to Option Selling posted a video on YouTube in which he tearfully explains why his hedge fund has just been wiped out by the “rogue wave” in natgas. 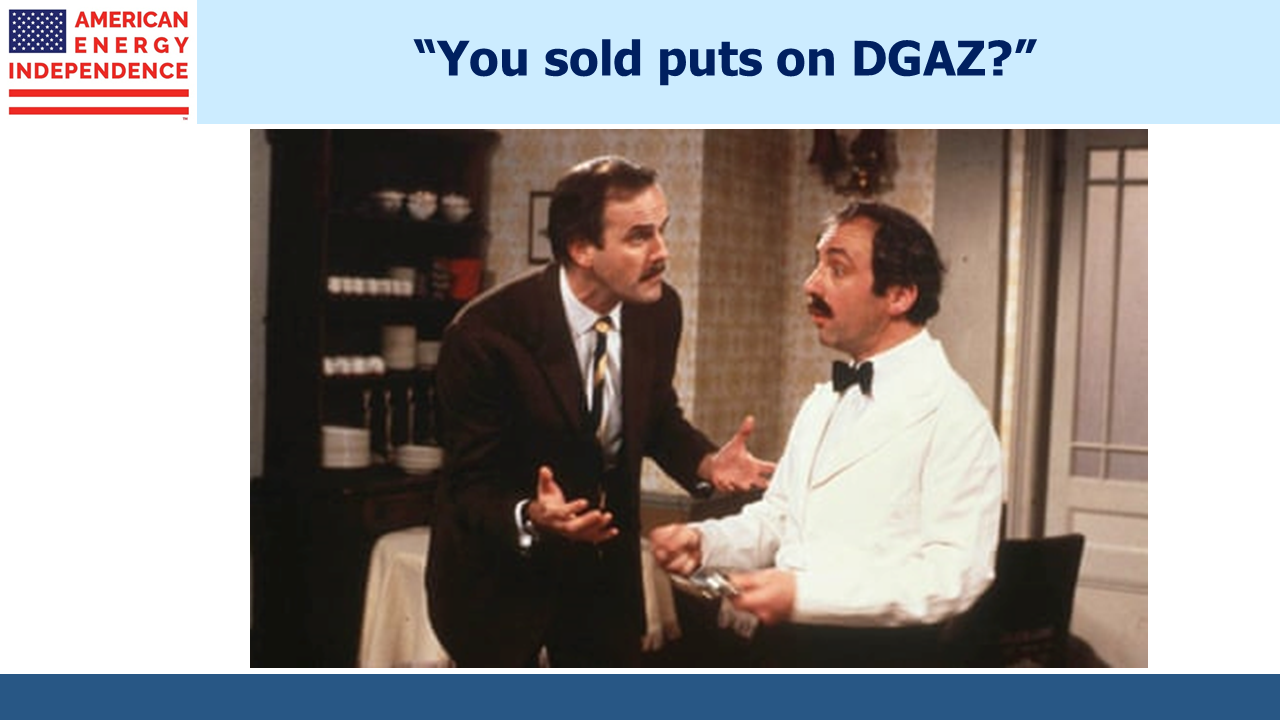 Leveraged ETFs and ETNs have their critics, and scarcely need one more. SEC officials have individually criticized them but stopped short of withholding approval.

The point is that the violent losses in FNGU highlight far more substantial recent losses for investors in the underlying stocks, and more broadly in growth-style investing. Since the 2016 Presidential election, equity returns have been dominated by a narrow group of growth stocks. At its peak in June, the FANG+ index had risen by 125% from its election-day level. Although the FANG+ group has been in retreat since then, the S&P500 Growth ETF (SPYG) continued to outperform. As recently as late September, SPYG had risen by 52% since the 2016 election, beating the S&P500 Value ETF (SPYV) by 22%. 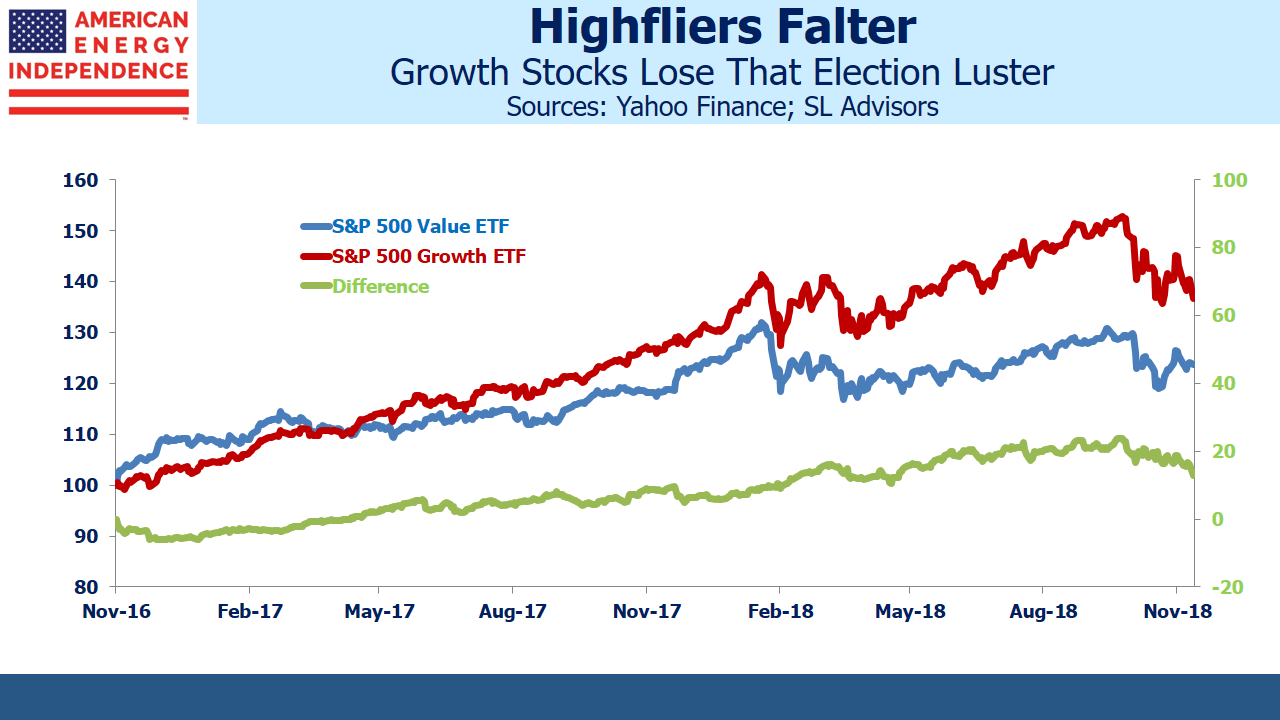 Since then, SPYG’s lead over SPYV has been halved. We are approaching correction territory, defined as a 20% pullback from the highs. FANG+ is already there, at -23% from its June high. The Nasdaq Composite Index not far away, down 15% from its high set in August. while SPYG is -12%. The S&P500 has pulled back 10%, with SPYV falling a more modest 8%.

There’s a shift under way. With growth investors certainly having had the better of things in the past couple of years, there are still profits to protect. But it’s rarely easy valuing former highfliers when momentum is turning. Value stocks by definition have firmer valuation support. In addition, their investors are less likely to sell in a falling market. They own what they do because they like the valuation, and are less dependent on others liking it more to generate a return. Low volatility stocks, having lagged the S&P500 by 5% for the year through September, are now outperforming the S&P500 by 4%.

This leads to one of today’s great value opportunities – U.S. pipeline stocks. The names in the American Energy Independence Index offer a 10.9% yield on 2019E Distributable Cash Flow (DCF, which is free cash flow ex-growth capex), up 13% over 2018. This is analogous to the Funds From Operations (FFO) commonly used in real estate, as we showed in a recent blog (see Kinder Morgan: Still Paying for Broken Promises). The index has a current dividend yield of 6.25%, and we expect dividends to grow 8% next year.

Growth stocks may resume their upward trajectory, but the recent volatility has shown how quickly two years of outperformance versus value can quickly reverse.

Oil and Gas Take Center Stage Energy Transfer: Cutting Your Payout, Not Mine
Scroll to top