Client meetings for many businesses have had to conform to local Covid-19 restrictions. Most of us have found that working remotely is fine, although I suspect it’ll become increasingly problematic in the months ahead. As Zoom calls suddenly became part of daily life, we were all chatting with people with whom we had recently shared an office. Relationships already existed. But we’ll see how it goes when newcomers have to build a rapport over Zoom. Training is also harder. Remote learning is widely believed to have been a bust (see The Results Are In for Remote Learning: It Didn’t Work). Research is finding that students achieved only 70% of the reading gains compared with a typical year, and less than 50% of the Math. This is why it’s critical that schools reopen in-person in September. 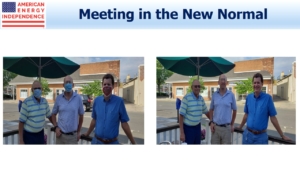 Meeting with clients has to take place outside – the photos are from a recent breakfast with two long-time clients and friends, Ron and Jeff Karp from Summit Private Investments. In March all the large investment firms we deal with quickly suspended visits by outsiders. Every contact now carries some risk, and it’ll be interesting to see how much old attitudes are restored once the general population is vaccinated or otherwise immune. It’s likely that the risk of infection disabling an entire department or firm will be a permanent consideration, just as business continuity plans took on added importance following the 2001 attack on the World Trade Center. In finance, we can expect regulators to start looking at how firms protect their employees, as well as their plans if another pandemic occurs.

Nobody misses their daily commute into New York City from the suburbs. Numerous conversations reveal that the 2-3 hours of time previously dedicated to daily travel is highly valued. People will return to the office, but it seems that schedules have permanently changed. Mass transit in the New York area and presumably others is likely to experience a permanent drop in demand, which will pressure finances.

JPMorgan expects to operate with offices only half full, even once restrictions have been lifted. “Hot desks”, available to different users each day will be a used at least temporarily. I understand from a friend that satellite offices are being considered in the suburbs, where enough formerly commuting employees live. Edison, NJ and Stamford, CT are two locations apparently under consideration. Although big corporations will want a more dispersed labor force, they’ll also want their people working in a secure IT environment subject to corporate oversight.

Another friend from Goldman Sachs told me seasoned employees in his department will work from home two days a week, and that such schedules will be fixed — i.e. if Tuesday and Wednesday are your at-home days, you’ll generally be required to stick to that. Interestingly, new hires will be expected in the office five days a week, recognizing that working remotely relies in part on existing professional relationships that have been built through in-person interaction.

I’ve also heard that ground floor office space is becoming more sought after, because workers don’t need to use the elevator. The WSJ noted the other day that some employers, “…can’t figure out how to send people up a 50-story skyscraper.” This is because, “… limiting riders on some elevators would create dangerous crowding in lobbies.” 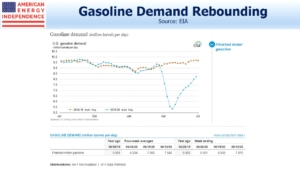 What does all this mean for energy consumption? U.S. gasoline demand has recovered to around 85% of last year’s levels, a surprisingly strong rebound given the recession. The re-imposition of types of lockdown in some southern states hasn’t yet shown up in the figures. But over the longer term, even when masks and social distancing are mostly a memory, some reduction in demand is still likely. 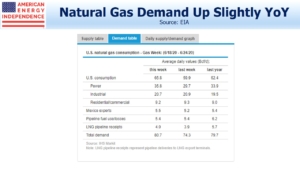 What receives less attention is the continued robust demand for natural gas. The latest weekly figures show total demand slightly ahead of this time last year, at 80.7 Billion Cubic Feet per Day. Across the midstream energy infrastructure industry, we calculate 58% is involved in natural gas with petroleum products only 26%. Although altered work habits are likely to dampen transportation demand, this is a smaller part of midstream than many realize. Earnings reports over the next few weeks will provide an important update on overall energy demand.